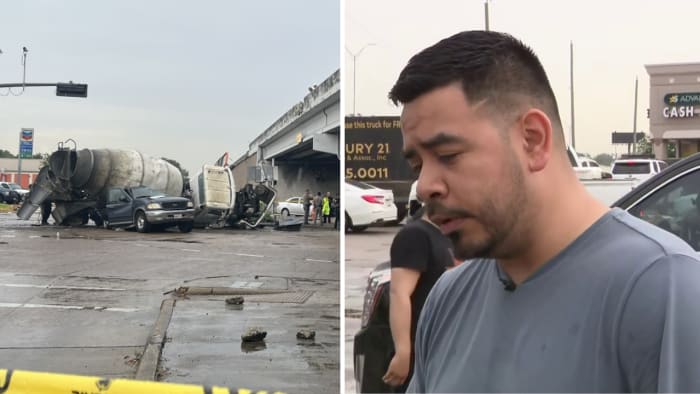 HARRIS COUNTY, Texas – A man who witnessed a horrific crash that claimed the life of a 22-month-old in east Harris County recanted the moments he saw the cement truck falling off an overpass, eventually landing on a family’s vehicle.

Raymond Romo, who works near the Beltway 8 and Woodforest intersection where the crash took place, said he saw when the cement truck driver swerved on the highway to avoid another driver before crashing through the concrete barrier on Friday afternoon.

Romo said the cement truck was hanging off the overpass while cars below attempted to move.

As he ran out of his place of business, the truck fell forward, landing on top of a Ford Expedition that reportedly had a family of four inside.

Romo, who says he’s also a father, rushed to the crash and immediately attempted to pull the individuals out.

“We saw it when we were in the middle of the parking lot land on the vehicle,” Romo said. “Instantly, me and my friend Joe, we went into action.”

Romo said his first thought was to pull the driver’s daughter out of the vehicle.

After that, he said he then tried to extract the babies, who were 22-month-old twins, out of the back seat.

Romo said he was able to grab one of the toddlers by their car seat, but unfortunately, could not grab the other.

The 22-month-old boy was pronounced dead at the scene.

“Luckily, I was able to get out one of them,” Romo said as he held back tears. “But, I couldn’t get out the other.”

Additionally, Romo said the driver, who was the child’s grandmother, was able to get out of the car. She was reportedly hysterical immediately following the incident.

“They saw it falling and the grandmother… she just froze and she kind of stopped,” he added. “When she stopped, that’s why it landed towards the back of the vehicle.”

The survivors of the incident were taken to area hospitals with minor injuries.

The driver of the cement truck reportedly had minor injuries but refused care.

Harris County Sheriff Lt. Simon Cheng concurred with Romo’s account of the story and said it appears the driver of that cement truck lost control of the vehicle, possibly due to slick road conditions.

Cheng offered condolences to the family and said the Harris County District Attorney’s Office will review evidence to determine if there are any charges that will be filed against the driver.