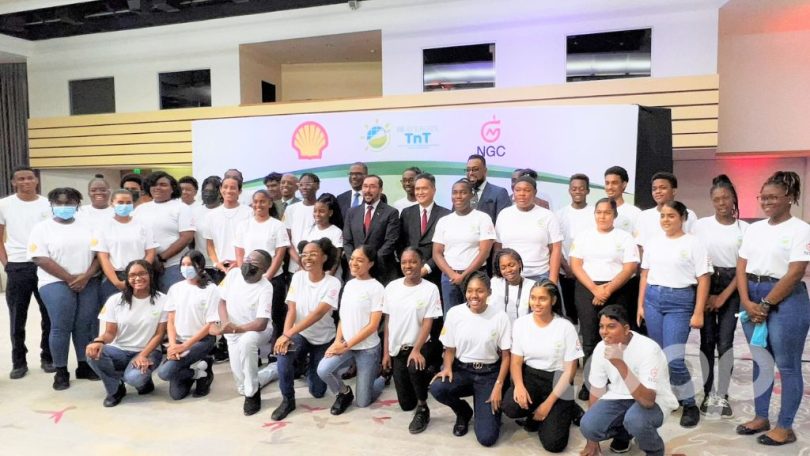 Minister of Energy and Energy Industries Stuart Young urged young people to disregard ‘old talk’ in light of global calls to end the fossil fuel industry, saying that the country will continue to focus on producing natural gas responsibly.

Speaking at the launch of Re-Energize TnT, a renewable energy efficiency project developed by Renew TT and sponsored by Shell Trinidad and Tobago in collaboration with the National Gas Company (NGC), Young said Trinidad and Tobago must maintain a focus on responsible, clean natural gas production.

“Don’t take the old talk when people tell you that you have to stop the oil and gas in Trinidad, you see that? We not doing that here, we will do it responsibly, we will do it clean. We will capture carbon, put it in the ground, find other ways to use it.

“We have taken the time to use satellites to see if we have any leaks, we’ll plug the leaks. We have to continue the fight, you have to continue the fight. Some of the people…telling us stop using oil, stop using gas, I want all of ya’ll to…do a Google search…check how many coal plants in Europe have been used since the war in Russia/Ukraine. All of them have gone back to using coal plants and that tells you two things; they need the electricity…they burn coal. So it shows how important energy security is.

“Secondly, it shows you how we have to look after ourselves, because they were the ones putting pressure on the rest of the world to stop using fossil fuels. When pressure buss their pipe, the first thing they did is switch back on the coal.

“Gas is the cleanest fossil fuel, so what you need to do is find a way to keep Trinidad and Tobago at the forefront of the gas industry. What we are doing at the government level…with our partners like Shell…is trying to clean it up. You have to find a way to balance the two, because you can’t go to one extreme or the other.”

“We need energy to survive on this planet in addition to food and water, but we need to provide this energy where it’s affordable, secure and clean, and I think we all know that’s not an easy challenge.”

“It’s against this backdrop today that Shell, in partnership with NGC, that we need to work with you, the future leaders of this world, with what we need to do to help move this forward.”

“It’s a great opportunity for us to come together and I believe this programme holds tremendous promise.” 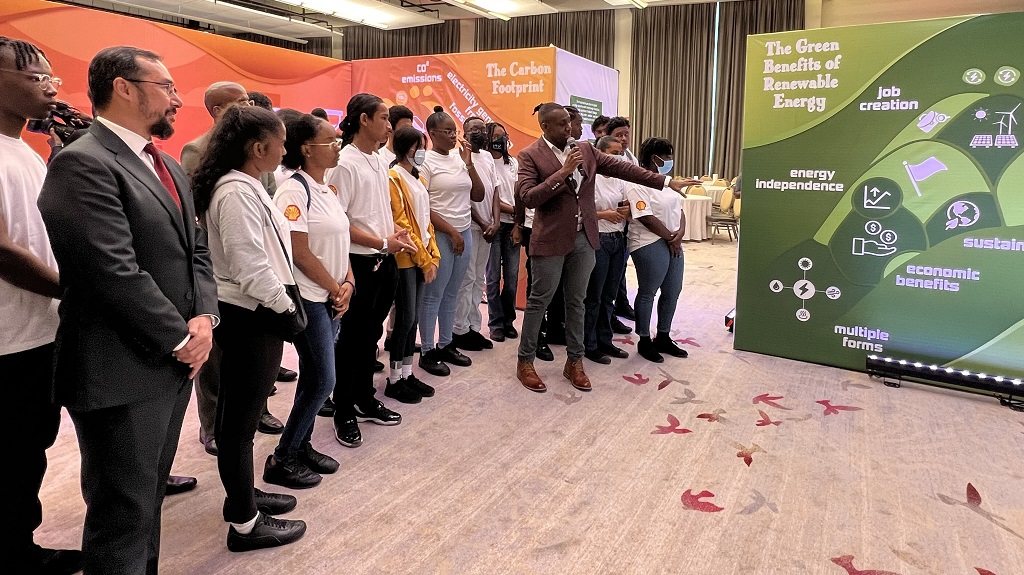 “Given the compelling evidence that exists that tells us that we are in deep trouble, one can conclude that we are perhaps not sharing that evidence loudly enough, often enough or widely enough. Education is a crucial weapon in a war against climate change.

“Since we at NGC joined the climate fight, public education has been an axis of our work. Our portfolio or carbon reduction and sustainability initiatives, collectively termed our green agenda, not only aims to reduce emissions from our business and industry but to build awareness around the need and means to address climate change.”

“Because energy education is so integral to our green agenda, the Re-Energize project conceptualised by Shell, which targets secondary school students, was an easy cause for us to get behind.”

“But of course just as climate change is the cumulative result of decades of carbon emissions, we need years of sustained mitigation before we can expect to see improvement. This is why we must educate our children and get them involved today.” 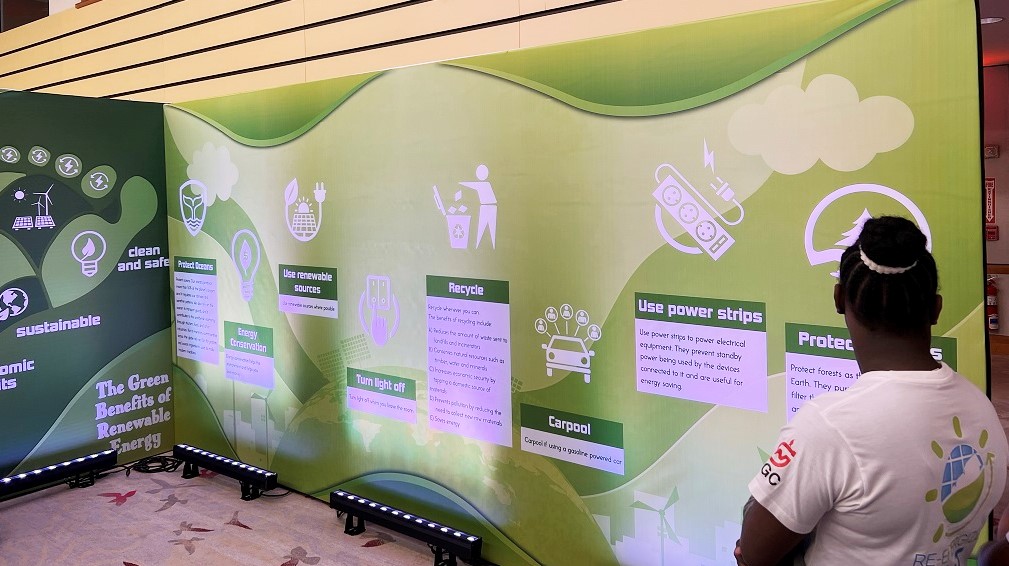 Young said government is pushing to meet its commitments under the Paris Agreement of a 15 per cent reduction in cumulative greenhouse gas emissions by 2030, and achieving 30 per cent renewable energy generation by 2030.

“Your government has been working to make sure we get new technologies in Trinidad and Tobago to clean it up…very soon you’ll hear big announcements on the solar side. Trinidad and Tobago will have the largest solar farms in the Caribbean…that’s for your generation.” 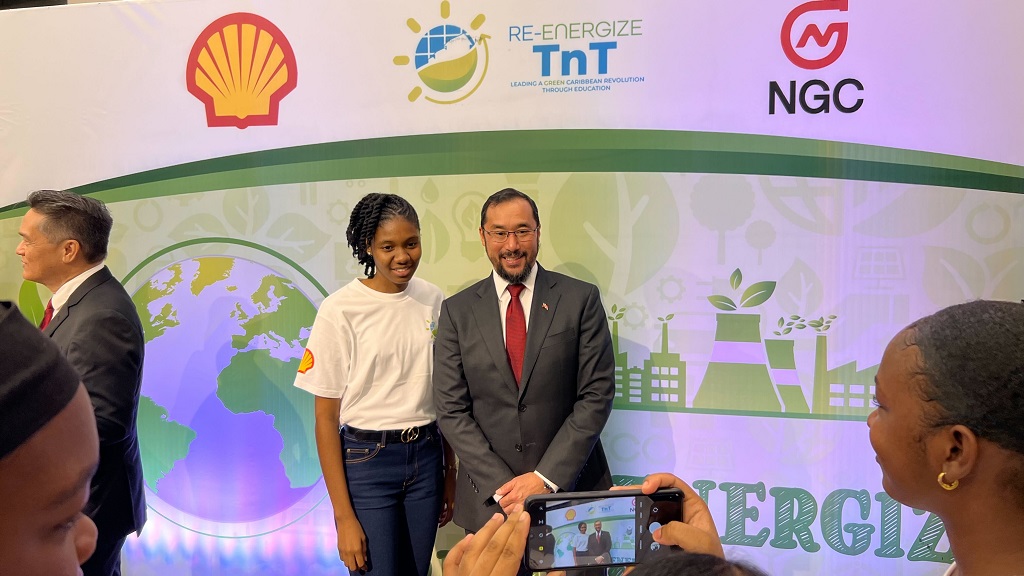 Minister of Energy and Energy Industries Stuart Young takes a photo with a student at the launch of Re-Energize TnT on November 23, 2022.

Young asked students to take on the challenge of developing ideas and plans for the country’s next phase in the energy industry.

“I’m asking you all…when you leave here today, to think about what is it that I am going to do…to ensure we stay as a leader in the energy sector? How am I going to encourage people to use less electricity…to bring in renewables?”

According to a United Nations report, in order to keep global warming to within two degrees Celsius (the benchmark beyond which there would be “dangerous” climate change impacts) the world would need to lower by mid-century global greenhouse gas emissions by 40 to 70 percent, compared with 2010 levels.

According to the report Climate Change 2014: Mitigation of Climate Change, greenhouse gas emissions can be reduced by replacing coal with “highly efficient natural gas combined-cycle power plants or combined heat and power plants, provided that natural gas is available and the fugitive emissions associated with extraction and supply are low or mitigated”.

For more information on Re-Energize TnT, visit them on Facebook at https://www.facebook.com/reenergizetnt