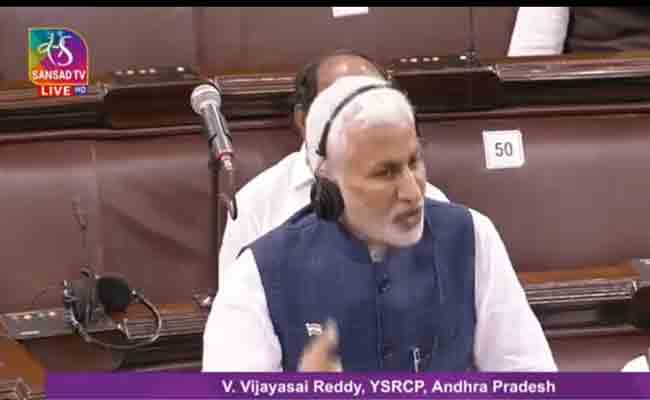 New Delhi: YSR Congress Party member of Parliament  V. Vijayasai Reddy asked during question time in Rajya Sabha on Tuesday, whether the Central government had any proposal to connect the Visakhapatnam sea port with the newly constructed Bhogapuram Airport as part of the Sagaramala project being undertaken by the Centre.

Union Minister of State, Ministry of Ports, Shipping and Waterways Shantanu Thakur replied and stated that he did not have any information about the proposal to connect Visakhapatnam port with the Bhogapuram Airport. He promised to provide complete information on this soon.

Put forth a query to the concerned Ministry in the RS on the GOI’s plan to connect Vishakhapatnam seaport with the upcoming Bhogapuram airport, as part of the Sagar Mala Project.

The ministry responded that the data on the same will be shared soon. pic.twitter.com/2WGWMzGf2x

This apart the  Ministry of Ports, Shipping and Waterways (MoPSW) is supporting 45 ferry service projects worth Rs 1,900 crore, Parliament was informed on Tuesday.Under the ambit of Sagarmala, the ministry has operationalised Ro-Pax Ferry (roll-on/roll-off passenger) service between Ghogha-Hazira in Gujarat and Mumbai-Mandwa in Maharashtra, Union Minister of Ports, Shipping and Waterways Sarbananda Sonowal said in a written reply to the Rajya Sabha.These services have transported more than 7 lakh passengers and 1.5 lakh vehicles, contributing towards clean environment and public welfare, Sonowal added.  Keeping in view the potential, the minister said additional projects are planned at Pipavav and Muldwarka in Gujarat and Ghodbunder, Veldur, Vasai, Kashid, Rewas, Manori and JN Port etc. in Maharashtra. Besides, the ministry is also supporting four projects in Andhra Pradesh, two in Odisha and 1 each in Tamil Nadu and Goa, he added.