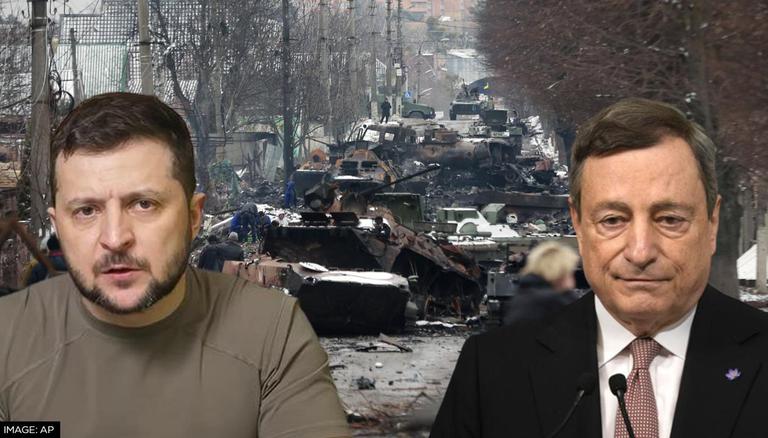 Amid the brutal Russia-Ukraine war, the President of war-torn Ukraine, Volodymyr Zelenskyy spoke with Italian Prime Minister Mario Draghi on bilateral defence cooperation. Over the telephonic conversation, both the leaders talked about the necessity to implement the European Union’s sixth package of sanctions against Russia. Zelenskyy also highlighted the importance of opening Ukrainian ports.

The president also expressed gratitude to Italy for its unwavering support for Ukraine and its citizens on its path to the EU. Taking to Twitter, Ukrainian President Zelesnkyy said, “Had a phone conversation with #MarioDraghi at his initiative. Talked about defensive cooperation, the need to accelerate the 6th package of sanctions and unblock Ukrainian ports.”

Had a phone conversation with #MarioDraghi at his initiative. Talked about defensive cooperation, the need to accelerate the 6th package of sanctions and unblock Ukrainian ports. Thanked for the unconditional support for Ukraine on the path to the #EU.

This conversation came after Italy’s PM Draghi on May 19, Thursday stated that only Ukraine would determine what terms of peace to accept in order to de-escalate the continuing conflict. As per him, the world must establish a truce as soon as possible to avoid the humanitarian catastrophe from escalating and to allow for the resumption of discussions.

‘Peace, without Ukraine, would be unacceptable’: PM Mario Draghi

During an address to the Italian Senate, Draghi remarked, “Italy will move together with its European partners and allies to all possible forms of mediation. But Ukraine will decide which world to accept, no one else. Peace, without Ukraine, would be unacceptable,” as per media reports.

Furthermore, the Italian PM has declared that Italy would continue to help Ukraine, without excluding the potential of weaponry deliveries. Draghi, who has been sharply critical of Russia since its incursion on Ukraine on February 24, said financial sanctions must be maintained in order to bring Moscow to the discussion table.

In addition to this, till now, Italy has enacted three decrees allowing armed exports, but the government has not revealed what weapons have been sent. Italian PM Mario Draghi also stressed that Italy will do all necessary to promote a peaceful resolution of the situation, but that any accord must have Ukraine’s full backing in order to be long-lasting.

Meanwhile, the world’s largest and most expensive yacht, nearly $700 million worth, which is linked to Russian President Vladimir Putin, has been confiscated by Italy. The magnificent six-deck Scheherazade was sighted sailing from the port of Marina di Carrara, according to a statement made by Italian officials on May 6. The huge yacht, according to Rome’s officials, has two helicopter landing pads, 22 rooms, a full spa, and an interior pool along with a dance floor. It is thought to be controlled by Eduard Khudainatov, the former CEO of Russian energy giant Rosneft.