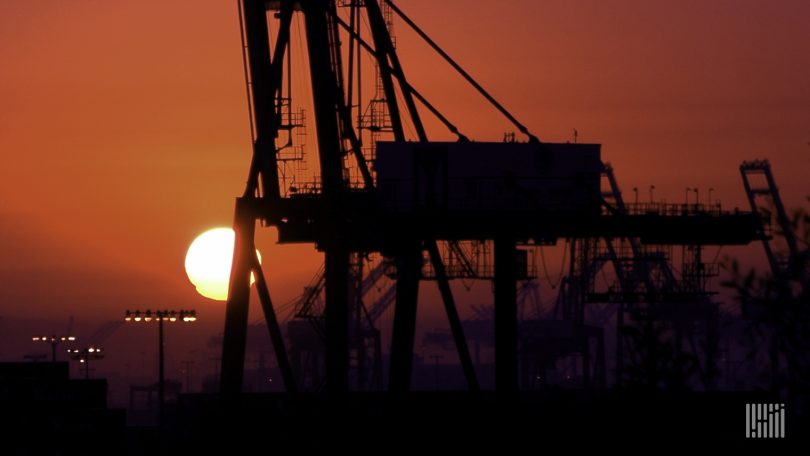 Not a single container ship waited offshore of the ports of Los Angeles or Long Beach on Tuesday. It was the first time the queue had gone to zero since October 2020, in the early days of the COVID-era consumer boom.

“The container-ship backup for the ports of Los Angeles and Long Beach has ended,” declared Kip Louttit, executive director of the Marine Exchange of Southern California, in a statement to the media. “It is time to move into a different phase of operations.”

The backup may be over in Southern California, but it’s not yet over for North America overall.

That’s still well above pre-COVID levels, when numbers were in the single digits. But congestion is clearly easing: The count is down 60% from the peaks earlier this year.

The rise and fall of the SoCal queue

Southern California’s ship queue shot to new heights in the second half of 2021. The extremely high number of vessels anchored and loitering in close proximity to each other in San Pedro Bay and the surrounding waters raised both safety and environmental concerns.

A new queuing system was launched on Nov. 16, 2021, to address those concerns. Instead of securing a spot on the waiting list on a first-come, first-served basis, inbound ships were assigned a so-called “Calculated Time of Arrival” (CTA) as soon as they sailed from their prior ports. Their position in line was dictated by the CTA, so they had no need to race across the Pacific and wait close by. Ships were urged to voluntarily wait outside port waters. Most loitered off the Baja peninsula.

The new queueing system didn’t do anything to reduce the number of waiting ships. The tally kept rising, hitting an all-time high of 109 container vessels on Jan. 9, 2022.

The numbers have been falling ever since, driven down by decreased import demand and a shift by shippers to East and Gulf Coast ports, partly due to concerns about the expiring West Coast labor contract.

Ships still in queue are there ‘by choice’

While Tuesday was declared the end of the backlog by the Marine Exchange, the backlog has effectively been over for the past three months.

Since Aug. 24, there has only been an average of seven ships in the queue per day. There have been three or less ships on multiple occasions.

The queue could build up again if there is a resurgence in import demand or some new supply chain disruption. Barring that, the count seems likely to hover at very low levels but not completely vanish, mirroring the single-digit counts seen since late August.

The reason is that the queuing system instituted in November 2021 will remain in place, with ships still assigned a CTA. Under this system, a ship is considered “in the queue” if its CTA is before the time the queue count is taken by the Marine Exchange. But unlike the situation during the supply chain crisis, ships are no longer in the same rush to dock at the moment their CTA comes up. (This also likely explains why the queue didn’t go to zero earlier.)

According to Louttit, “Ocean carriers, working together with their terminals, are sometimes choosing to arrive after their CTA … because it optimizes their vessel operations.” The queue used to exist because of supply chain bottlenecks. What’s left of the queue now exists “by choice.”

Queues off other ports are shrinking

Looking at all North American ports, the total queue reached a high of around 150 container ships in early 2021, with most waiting vessels off West Coast ports, primarily Los Angeles/Long Beach.

The overall count declined through the spring as the Southern California backlog eased. Then queues began to build off East and Gulf Coast ports as shippers directed more cargo away from the West Coast.

The North American queue rebounded to around 150 in late July, this time driven by queues off the East and Gulf Coast ports.

As of Wednesday morning, the largest East Coast backlog was off Savannah, Georgia, with 28 vessels waiting. There were 11 ships off the coast of Virginia, one off New York/New Jersey and one off Freeport, Bahamas.

On the Gulf Coast, six container vessels waited off Houston and one off Mobile, Alabama. On the West Coast, Oakland, California, had the largest queue, with nine ships waiting. Another two vessels waited off Vancouver, British Columbia.