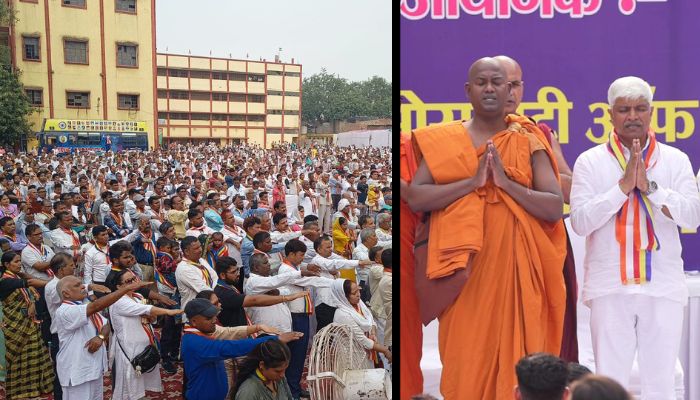 On Wednesday (October 5), AAP MLA (Seemapuri) Rajendra Pal Gautam was spotted at an event where 10,000 Hindus were converted en masse to Buddhism.

The controversial event, organised by the Buddhist Society of India, was conducted at the Dr. BR Ambedkar Bhavan in Jhandewalan in New Delhi.

Gautam, who serves as the Social Welfare Minister in the Delhi Cabinet took to Twitter to gloat over the mass conversion of Hindus. The event coincided with the Dusshera celebrations during which the Hindu community celebrates the victory of Lord Ram over Ravana.

The AAP leader wrote, “With the support of Mission Jai Bhim”, more than 10,000 intellectuals took a pledge to make a caste-free and untouchable India by converting to the Faith of Gautam Buddha.” The archived version of the tweet can be accessed here.

During the event, a saffron-clad man administered an oath to the crowd, which closely resembled the controversial 22 vows of BR Ambedkar. The man urged the Hindus to disassociate themselves from their original Faith and desist from the worship of deities.

“I do not and shall not believe that Lord Buddha was the incarnation of Vishnu. I believe this to be sheer madness and false propaganda. I shall not perform ‘Shraddha’ nor shall I give ‘pind-dan’,” he further added.

The man, dressed in saffron, continued, “I shall not allow any ceremonies to be performed by Brahmins. I renounce Hinduism which is harmful to humanity and impedes the advancement and development of humanity because it is based on inequality, and adopt Buddhism as my religion.”

During the event, AAP Minister Rajendra Pal Gautam was seen repeating the controversial vows and sharing the stage with the man.

Later, he was seen delivering a speech wherein he urged Hindus to renounce their Faith and tread the path of Dr Ambedkar. “If you don’t want to be called a traitor, then, we need to spread this message of BR Ambedkar to every household,” Gautam said.

“If caste has been made by nature, why there is no caste in France, China, Korea, Australia, New Zealand?” the AAP leader displayed his ignorance about social hierarchy and affirmative action in other nations.

“Who benefitted from this caste system and who suffered the most? BR Ambedkar had found the medicine to this disease and we are now spreading it,” he was heard as saying.

Rajendra Pal Gautam also lamented how BR Ambedkar died within a month of converting to Buddhism and failed to convert the whole nation. Known as Dhamma Chakra Pravartan Din, Ambedkar converted to Lord Buddha’s Faith on October 14, 1956 along with 3,80,000 of his followers.

In March this year, Arvind Kejriwal mocked the genocide of Hindus during his address in the Delhi assembly under the pretext of criticising Vivek Agnihotri’s movie ‘The Kashmir Files.’

He had insinuated that the plot is not grounded in reality and that it is a “jhoothi” (fake) film.

The AAP supremo had earlier tried to rebrand himself as a ‘Hanuman bhakt’. At that time, netizens pointed out how he derided Hindu sentiments to make a political statement.

When leftists had attacked ABVP students over semester form at Jawaharlal Nehru University in January 2020, Kejriwal shared an objectionable cartoon. The graphic showed a belligerent Lord Hanuman setting the university campus on fire.

Ahead of the 2019 general elections, Kejriwal shared an image where a man with a broom was seen hitting the Swastika symbol. The seasoned politician shares the derogatory image, despite being well-aware of the sanctity of the symbol in Hinduism, Buddhism and Jainism.

In August 2020, the official Twitter handle of AAP shared pictures of Kanchenjunga in Sikkim, Kamet Peak, and Nanda Devi hills in Uttarakhand and drew analogies with a humongous landfill at Ghazipur in Delhi.

The contentious tweet was accompanied by the caption, “Highest Mountains of India.”

In 2018, the AAP supremo deliberately drew false equivalences between building universities and temples to suggest that the construction of the latter would undermine development in the country.

“I was thinking what would have happened if Jawaharlal Nehru built temples instead of the Steel Authority of India? Would India have developed after Independence?” he said during a public address, mocking the construction of Ram Mandir.

Even in 2014, he tried to trick Hindus into guilty for supposedly demanding the construction of Ram Mandir atop the debris of a mosque.

Thus, it comes as no wonder that AAP Minister, Rajendra Pal Gautam, was part of the mass conversion event.