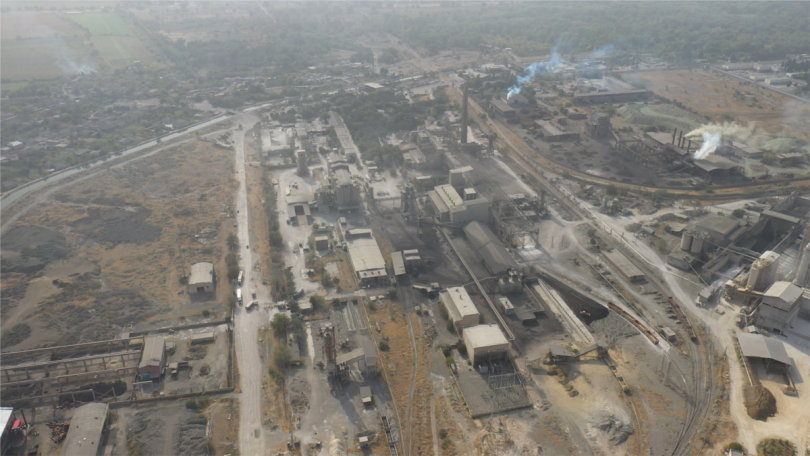 DEDOPLISTSKARO, Georgia — Fridon Narozauli points to the cracks jaggedly running down the walls of his home in the Khevsuri district in Dedoplistskaro, a town in eastern Georgia.

Like those living nearby and similarly impacted, Narozauli, 80, says the damage was done by the constant blasting at a nearby limestone quarry, the largest such site in Georgia. Much of the rock excavated here in this mountainous region feeds Georgia’s cement industry, a key part of the Caucasus country’s economy.

The quarry is operated by HeidelbergCement Georgia, a concrete and cement colossus in the hands of an investor group with ties to influential members of the ruling Georgian Dream party. The party was founded by Bidzina Ivanishvili, a former prime minister and tycoon, who is still reported to hold much sway in Georgia.

An investigation by RFE/RL in cooperation with Green Alternative, a Georgian environmental NGO, found HeidelbergCement Georgia has been cited by Georgian environmental officials for numerous violations at its facilities across the country, but has only been fined a few times. In those cases where it did face financial penalties, the amounts were meager.

The probe found that HeidelbergCement Georgia was a loss-making firm up until the Georgian Dream-linked individuals took a majority stake from the German parent company in late 2017. HeidelbergCement Georgia told RFE/RL that it operates in accordance with the environmental regulations in Georgia and has taken measures to address concerns and complaints leveled at the company.

Back in the Khevsuri district in Dedoplistskaro, another resident, Badri Narozaul, had iron girders inserted into the walls of his house, but that didn’t stop the cracks from appearing.

“The work [at the quarry] is nonstop. There are always blasts. When [explosive charges] are placed even deeper in the quarry, the shaking, the house trembling, and my trembling, all get worse. The last blast was about four or five days ago,” Narozaul told RFE/RL.

RFE/RL was taken to several more houses in the Khevsuri district, many of whose walls had suffered similar damage. Some residents say those with means have invested in strengthening their walls with a combination of iron and concrete. They also suggest that officials don’t care, noting that after they filed complaints in April, no officials came to view the damage themselves.

After those complaints, HeidelbergCement Georgia did face a fine for minor operational violations and was fined a measly — according to activists — 5,000 Georgian laris ($1,845), according to documents from the Environmental Protection Ministry obtained by RFE/RL.

Those documents also show that more serious allegations, including illegal extraction of limestone beyond the area spelled out in its permit license, have been forwarded to law enforcement authorities for further investigation, the status of which is unclear.

The Prosecutor-General’s Office did not respond to inquiries from RFE/RL.

HeidelbergCement Georgia denied it had violated the terms of the quarry permit in written comments to RFE/RL. “The company has no information on the case you mentioned. We would like to remind you here that the company did not conduct mining operations outside the license territory,” it said in a statement. “Mining of ore is carried out in compliance with the rules. The quarry is very far from any population center.”

The alleged illegal activity was calculated to have amounted to an extra 77,000 cubic meters of extracted limestone, enough to fill about 1,000 rail cargo wagons, according to documents from the Environmental Protection Ministry, which put the damage at 141,000 laris ($52,035), an unusually large sum for such a case in Georgia and reportedly the highest calculated by the ministry against HeidelbergCement Georgia in the last nine years.

Heidelberg Materials, a multinational corporation headquartered in Germany and one of the world’s largest producers of cement and concrete, entered the Georgian market in 2006 with the reported help of the family of Davit and Gela Bezhuashvili, influential members of the government at that time.

Since 2018, the division of the company operating in Georgia has been in the hands of an investor group with ties to the Georgian Dream party. In November 2017, Heidelberg sold its majority stake in the Georgian operation for 20.8 million euros. ($21.8 million)

Today, the German-based Heidelberg group still holds a 45 percent stake in the company. The Bezhuashvili family holds 10 percent and the remaining 45 percent is jointly managed by the Georgian Co-Investment Fund and Hunnewell Partners.

The Georgian Co-Investment Fund was founded by former Prime Minister Ivanishvili. Today, the investment company is managed by Giorgi Bachiashvili, a trusted ally of Ivanishvili, who is still a very influential figure in Georgia.

Hunnewell Partners is a private asset-management company whose portfolio includes large companies in Georgia, such as Magticom, Liberty Bank, the Rustavi Metallurgical Plant, and Imedi TV. One of the managing partners at Hunnewell is Irakli Rukhadze, who is also the chairman of the supervisory board of Imedi, a television station seen as loyal to Georgian Dream.

For years, HeidelbergCement Georgia operated in the red, racking up losses. The red, however, turned to green after the ownership switch in 2017, with profit margins rising from 2018. Over the past three years, the company has reported a total profit of more than 100 million laris ($36.9 million) over that period.

On its website, HeidelbergCement Georgia boasts, “The company supplies cement and concrete to almost every major construction project in Georgia,” and that it is the only producer in Georgia of clinker, an ingredient in most cement products that acts as a binder. The company has plants, mines, and other facilities across Georgia and employs more than 1,000 people.

Many of the sites and facilities belonging to the Georgian cement giant have long faced allegations of polluting or degrading the local environment, as in Khevsuri.

HeidelbergCement Georgia has been accused of violating such norms at its cement plants in the central city of Kaspi and the southern city of Rustavi. Irregularities have also been reported in the past at its limestone quarries in the eastern region of Kakheti. The company has also been accused of pouring untreated water from its concrete plant outside Tbilisi into the Mtkvari River.

Dust and noise from the cement plant in Kaspi is something those living nearby have long complained about, even after a new Chinese facility was completed in 2019 to replace the old one, greatly reducing some of those concerns.

Those living in its shadow often post photos of the smoke-belching behemoth on Facebook and other social media.

Ani Tatanashvili is one of them. She says the dust that she presumes comes from the plant is invisible to the naked eye but piles up over time on the windows of her house every day.

In 2017, a representative of the company said at a public meeting that a system to monitor pollution would be installed at the Kaspi cement factory. Heidelberg has said it monitors the dust in the air in Kaspi every month but does not make the results public. It did not respond to a request from RFE/RL for access to the data.

Besides dust, locals also complain that noise generated at the facility exceeds limits set by the government, allegations the company dismisses.

In a letter sent to RFE/RL on November 21, Heidelberg responded to the allegations of excessive noise. “The company has fully studied the sources of the noise,” it said. “Noise suppression screens are installed. In order to comply with the norms defined by the 2017 noise regulation, the company has changed its working mode and is constantly working on implementing additional noise reduction measures.”

The Environmental Protection Ministry has cited HeidelbergCement Georgia for numerous violations between 2013 and 2022, resulting in some cases in small fines, according to official documents obtained by RFE/RL’s Georgian Service and Green Alternative.

Given the small sums, the fines are hardly likely to force the company to change its behavior, says Nino Gujaraidze, executive director of Green Alternative.

“These fine amounts are completely ineffective for a company of this scale and cannot fulfill the function of a fine.”