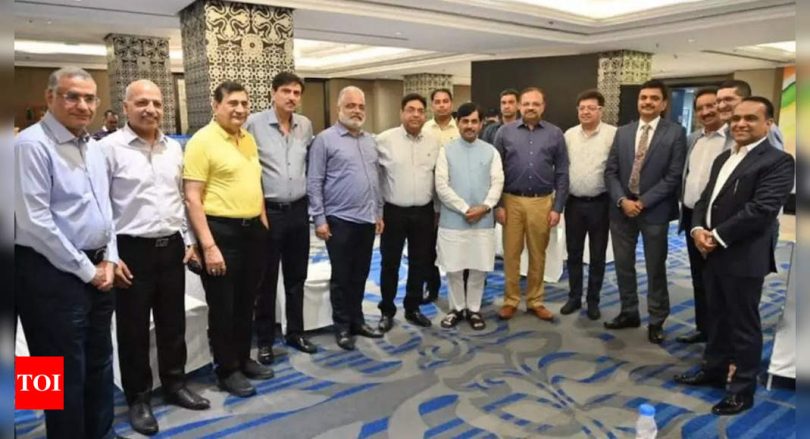 LUDHIANA: In a major development shortly after scrapping of the textile park project by the Punjab government, Bihar Government has come calling to Ludhiana to woo the industrialists from the textile industry and other sectors to invest in Bihar.
BJP’s prominent face Syed Shahnawaz Hussain who is Bihar’s industry minister was himself present in this investors meet held at a city hotel in which representatives from several big business groups of Ludhiana and Punjab including Nahar Group, Vardhman Special Steels, Cremica group etc were also present.
Speaking on the occasion, Syed Shahnawaz Hussain said, “The people of Bihar have made and are making the industry successful all over the country with their hard work. Even the industrialists of Punjab are well aware that the labourers of Bihar forms strength of Bihar. Along with the textile sector, our policy is also excellent for every kind of industries. We request Punjab’s industry to open an expansion base of your industry in Bihar so that your access to the big market of Northeast India become easy”.
Sandeep Sandeep Pondrick, Principal Secretary, Industries Department, Government of Bihar, appealed to the industrialists and investors of Punjab to invest in Bihar and said, “Our department is committed to the industrialization of the state, and we are constantly striving to improve the environment of the industry in the state. All possible incentive that we have promised will be given on time and today apart from prominent textile companies, more than 30 companies across various sectors including FMCG, Auto Components among others participated in the event. These include Vardhman group, ST Cottex, Nahar group, Sportking, Saluja Enterprises, Arisudhana group, Garg Acrylics, Longowalia spinning and others”
Some of the prominent industrialists who were present in the investors meet included Kamal Oswal from Nahar Group, Anoop Bector from Cremica, Sanjeev Pahwa from Ralson, Sanjeev Kalra from Deepak Fasteners, Ramesh Jagota from Youngman, Rajesh Aggarwal, Sanjay Jain, Kamal Chaitly besides others.
Photo Quote – Keen interest expressed by industrialists of textile hub
“The industrialists of textile hub Ludhiana expressed keen interest towards Textile and Leather policy of Bihar. Expressed intention to seriously consider the possibility of investment in the state. More than 30 companies from Textile, FMCG, Automobile and other sectors participated in Bihar Investors Meet in Ludhiana.” -Syed Shahnawaz Hussain, Minister, Department of Industries, Government of Bihar