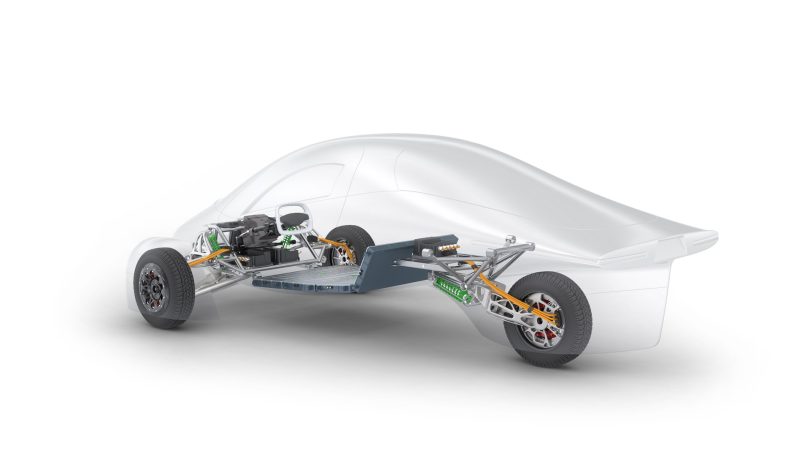 Aptera this week confirmed that its solar-supplemented three-wheel production EV will offer a Tesla connector and corresponding charging equipment, both produced by the charging-hardware maker Lectron.

The California startup’s adoption of the Tesla standard, now called NACS, was already all but a given. The company had made earlier assertions it wanted to use it, and teased the Tesla ports and charging connector in a 2020 preview of the EV. Earlier this year Aptera backed a petition to make Tesla connectors and Superchargers the U.S. standard. But with the announcement of the supplier, it’s now official.

Aptera will use in-wheel motor tech from Elaphe, and it confirmed earlier this year that it’s using EVE Energy cells, in the same 2170 format Tesla has used in most Model Y and Model 3 vehicles, with battery packs ranging up to around 100 kwh for the 1,000-mile range model. Likewise, in what it claims is “the most efficient vehicle ever made available to consumers,” Aptera has teased Tesla-level performance, at 0-60 mph in as little as 3.5 seconds.

That said, the company has suggested that since its power demands are so low, and its solar EV can regain up to 40 miles of daily driving from solar energy, most owners will find Level 2 charging all they need. The 3.3-kw onboard AC charger will gain 33 miles of range per hour, it claims. But for road trips it will be able to DC fast-charge at 50 kw—enough to pack in 500 miles of range per hour and good for a 30-minute charging break every four hours, Aptera says.

Neither Aptera nor Tesla have yet confirmed how a visit to Supercharger stations will work, but if we had our guess the answer would be seamlessly. It’s likely that Aptera is one of the “low-key” agreements for Supercharger accessibility that Tesla CEO Elon Musk confirmed in December 2020.

Tesla last month made a new call to charging networks, vehicle manufacturers, and hardware makers to use the connector standard—although the timing suggests that this may have been motivated by the formation of a massive $7.5 billion federal EV charging network requiring, for federal support, that stations use “non-proprietary” charging systems.

Tesla’s NACS ranks behind the two other fast-charging standards, CCS and CHAdeMO, on station locations, but it exceeds both of them in terms of number of available charge ports. So far only one of the other major charging networks, EVgo, has added Tesla connectors at some locations.

Pragmatically though, it holds some sound advantages—most notably, that the Tesla connector combines AC and DC charging into a single package, and that it takes up half the size of CCS.

On a very small car like the Aptera, that makes a big difference.