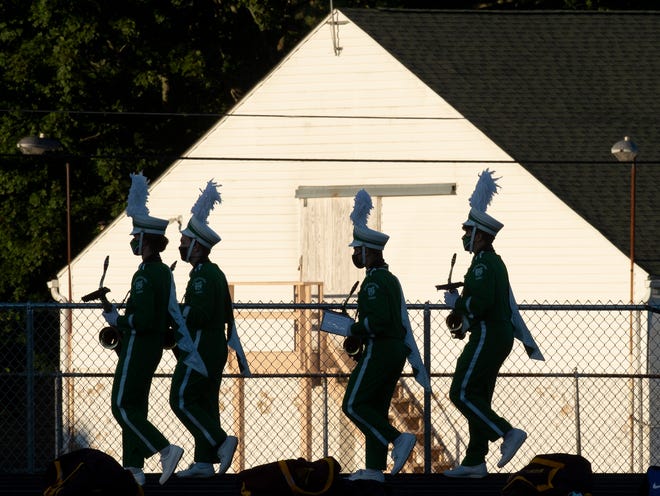 Upcoming events for the band include the Preview of Bands 7 p.m. Tuesday at Barberton High School’s Sharkey Stadium and the Rittman Band Show at 7 p.m. Oct. 15 at Rittman Stadium.

Come and support the Mogadore High School band and its terrific performances.

Back to School / Fall Sports Kick Off happening Thursday

The Back to School / Fall Sports Kick Off event will be held 6 p.m. Thursday at Memorial Stadium.

There will be open houses at both the elementary and high schools 4-5 p.m.. When the open houses have concluded, the band and the sports teams will be introduced.

There will be concessions sponsored by the Mogadore Band Boosters, a bake sale by the Mogadore After Prom Committee, face painting and giveaways by various community organizations. Come and support your fall athletes and band members!

The Friends of the Mogadore Branch Library usually has its semi-annual book sale in the fall, but this year the event will take place on Aug. 27. Books, DVDs, CDs, books on CDs, children’s and teens’ books will all be available to purchase. Raffle baskets will be on site for patrons to try their luck at winning.

The event takes place 10 a.m. to 2 p.m. at the library on South Cleveland Avenue. On Aug. 26, there will be a preview for Friends members from 3:30 to 5:30 p.m. Stop by the library and join the Friends for a modest membership fee, which gives you entrance into the preview sale.

Proceeds from the sales help support the library’s programming and supply purchases for the patrons.

Mayor Mike Rick provided some village updates for the community.

“The 2022 Mogadore Summer Festival was a huge success,” he said. This was the first full festival since 2019, due to the pandemic. More children bought tickets for rides than at any other previous festivals. Congratulations to the Festival Committee.

Regarding Lions Park, the demolition of the basketball and tennis courts has begun.

“The Village was able to get a $150,000 grant from the Community Development Block Grant (CDBG) towards new basketball, tennis, and pickleball courts,” Rick said.

There will be two basketball courts, one tennis court, and several pickleball courts. Projected timeline for completion is the middle of September. The village has also applied for grants for new playground equipment and a walking trail at the park.