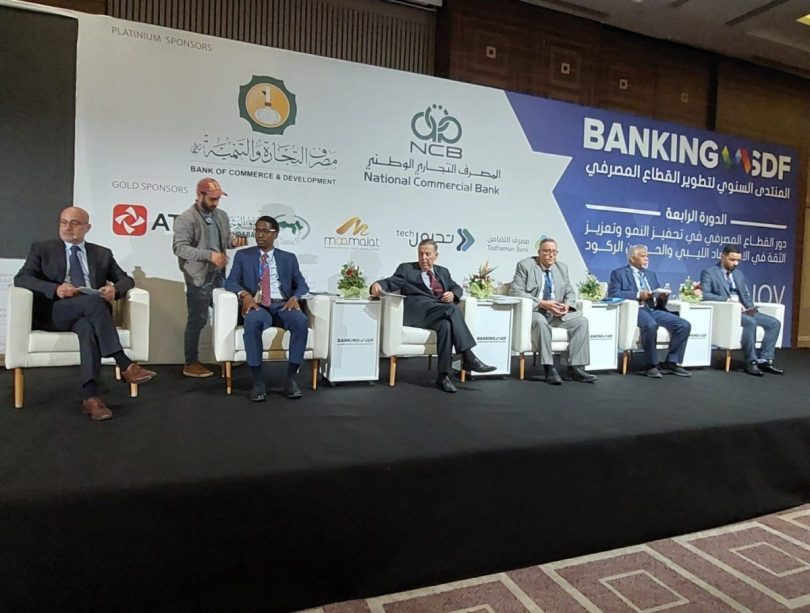 Libya needs to make radical and rapid economic reforms if it is to have any chance of pulling itself out of the mire of stagflation, a Libyan banking conference has been told. Bankers and financiers from across the country attending the fourth Libya Banking Sector Development Forum which got underway in Tunis today heard that the combination of recession and inflation which has affected the rest of the world – because of Covid, the war in Ukraine and consequent international uncertainties – is impacting strongly on the Libyan economy. But because of the country’s divisions, speakers at the forum warned that the chances of decisive action to deal with inflation and recession were slim.

The Libyan economy, speaker after speaker pointed out, was not only not immune to what is happening in the rest of the world, but because it has to import over 80 percent of its goods and services, and exports just one product, it is even more impacted than that of some other countries. The excessively high import ratio meant that Libya imports inflation, especially from China and from Turkey where, it was noted, it is currently at 85 percent. But, making matters worse, income is subject to oil and gas price fluctuations that are beyond the country’s control. Moreover, as far as the latter are concerned, export levels cannot be guaranteed because of the intermittent blockades of exports. Ali Hibri, the Benghazi-based deputy governor of the Central Bank of Libya (CBL), said that inflation in eastern Libya where he is regarded as the acting governor is now at 90 percent.

It is all having painful economic consequences for ordinary Libyan citizens, speakers pointed out.

People were complaining about rising prices, noted former governor of the Central Bank of Libya and planning minister in the previous Government of National Accord Taher Jehaimi. No-one was happy about their incomes, businesses were complaining about the lack of demand, and some were even closing down, he said.  As a result, he added, there were growing calls for a review of the exchange rate in order to boost the declining purchasing power of the dinar.

Unlike countries such as the US and UK where interest rates have been used to try and contain inflation, it was pointed out that Libya has few tools at its disposal in the battle against it. There were some possible solutions to the stagflation crisis in Libya, speakers said. There was near unanimous view among speakers that Libyan state spending is too high and needs to be reduced. Specifically public sector salaries and subsidies had to be cut.   There was concern, too, among the various speakers about the costs of the proposed minimum wage of LD 1,000 a month being proposed by the House of Representatives.

By making spending cuts, speakers noted, there would be more funding available for infrastructural and development spending which, it was said, would create more homes and more jobs.

Significantly, there were calls from a number of speakers for the repeal, or at least review, of Law 1 of 2013 which prohibits the use of interest in banking – although one supportive delegate called it “one of the best laws” ever made in Libya.

Banking sector reform was a main theme during the first day of the forum, and there was some criticism of the attitudes adopted by the Tripoli-based CBL. One speaker said that banking sector reform had to start with the CBL.  Responding to a list of priorities for the banking sector put by the World Bank’s lead economist, Abdoulaye Sy – among them rebuilding client trust in the banks, addressing irregularities and developing digital services – one speaker called for greater more trust of the commercial banks on the part of the CBL. The CBL, he said, turned a blind eye to the banking sector’s calls for change.

Mohamed Abusnina, economic professor at Benghazi University who spoke of the need to reduce public spending, address inflation and create job opportunities, believed that the CBL is unable to do anything to address banking sector issues because of its own divisions. In any event, in the current situation, with the war in Ukraine and a steep increase of agricultural imports, he thought it would be very difficult to control inflation.

Numerous reforms were called for during the first day of the forum, such as the need for a property register so that bank clients could present commercially acceptable title deeds as collateral for loans. However, it was acknowledged that many of the suggested reforms had been raised in the previous banking forums, the last of which was in 2019.

It was also noted that even though such reforms continued to be ignored, the Libyan banking community would still push for them until change was implemented.

Former CBL Governor and Minister of Planning Jehaimy to preside over 4th Libya Banking Forum in Tunis  8 to 9 November (libyaherald.com)

4th Banking Sector Development Forum to be held in Tripoli in October 2022 (libyaherald.com)

SME finance, a new airline, a public transport service and a union of private banks announced at second banking forum

Second Libyan banking forum to be held in Benghazi