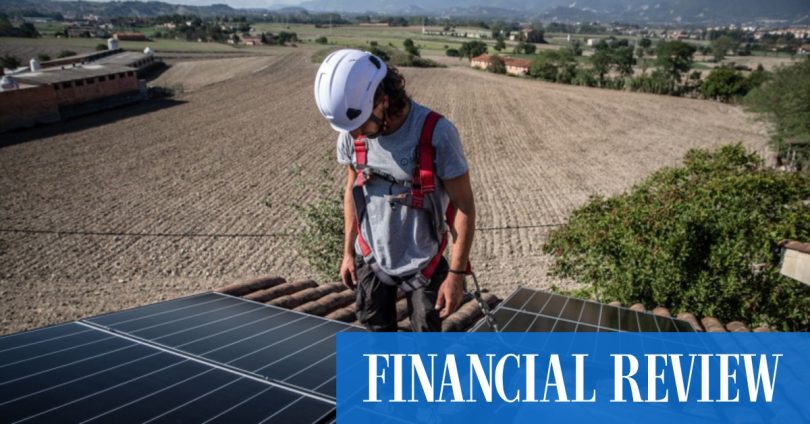 “Some of them are working out of their homes or small sheds,” he said. “They don’t have large overheads as they have to keep costs under control.

“What we don’t need is the ETU coming over the top and adding costs to consumers and then the prime minister saying why can’t you give us a decrease in prices.”

The Albanese government promised before the election that its ramping up of renewable energy projects would allow families to save up to $275 in electricity prices.

The federal government and those in NSW, Queensland and Victoria are expected to be funding solar farms, wind farms and pumped hydro projects over the next decade. The Andrews government has also promised to revive the State Electricity Commission as part of a $1 billion spend to achieve its 95 per cent renewable energy target by 2035.

While the Albanese government excluded civil and commercial construction firms from the multi-employer bargaining laws, Mr O’Dwyer said that was “absolutely misleading” because the carve-out did not extend to electricians in construction.

The ETU has typically pursued average pay rises of 5 per cent a year in construction, but a new template agreement in NSW has ramped up pay claims to 7 per cent a year to match rising inflation.

ETU acting national secretary Michael Wright said that “there is an attraction and retention crisis in renewable energy with workforce shortages tens of thousands deep”.

“Does anyone really think we will make the transition to clean energy by relying on backpackers on ABNs?” he said.

“Multi-employer bargaining creates the framework for the sustainable, loyal and productive workforce we need. The last thing we want is a cost-cutting race to the bottom.”

Under the single-interest bargaining regime, multi-employer agreements can extend to unwilling employers as long as there is majority support from staff, the businesses are “reasonably comparable” and it is in the public interest. Small businesses with fewer than 20 employees are exempt.

National Electrical Contractors Association chief executive Oliver Judd said it had concerns about the laws’ effect on medium-sized businesses and argued renewables would be an “early test” of the bargaining laws.

“We are concerned that it will add cost and complexity to negotiations undertaken by subcontracting firms and there remains a lack of detail about how those businesses will be protected,” he said.

“The renewable sector is critical to the government’s Powering Australia Plan, and we see this as an early test of the new legislation and its impacts on the sector.”

He argued the multi-employer agreements could create “market distortion” and threaten the installation of critical infrastructure.