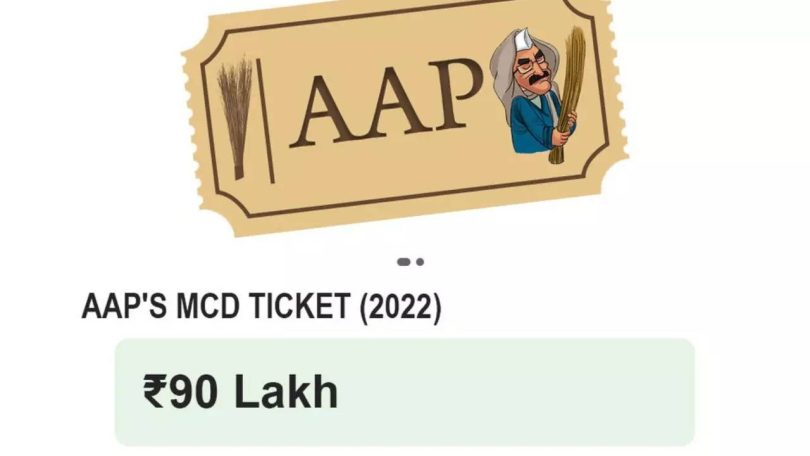 New Delhi: The Delhi BJP set about their Twitter activities on Tuesday with a meme trolling the Aam Aadmi Party over the MCD cash-for-ticket controversy.
The tweet carried a meme that portrayed AAP’s MCD tickets being put on sale on an e-commerce website called “AAP Kart”.

Earlier this month, three including the bother-in-law and personal assistant of AAP Model Town MLA Akhilesh Tripathi were arrested for accepting money for confirming a ticket to an MCD poll candidate. Later, Tripathi was summoned for questioning.

The Anti Corruption Bureau had said that MLA Tripathi allegedly demanded Rs 90 lakh from AAP worker Gopal Khari to confirm a seat for his spouse from a ward in Kamla Nagar, the Times of India (TOI) had said in a report.

The image read: “Party offer Get 10% off if you have criminal background”

It was a reference to AAP leader Satyendar Jain, who was put behind bars recently. The 58-year-old Delhi minister was arrested on May 30 under the Prevention of Money Laundering Act.

Meanwhile, AAP MLA Gulab Singh Yadav was on Monday beaten up by his own party workers during a meeting at Shyam Vihar. It is being reported that Yadav was manhandled by some of his AAP workers after an altercation broke out over the issue of the distribution of tickets for the Delhi MCD election 2022.

The video of the incident has gone viral on social media.

The MCD elections are scheduled for December 4 and the counting of votes will take place on December 7.