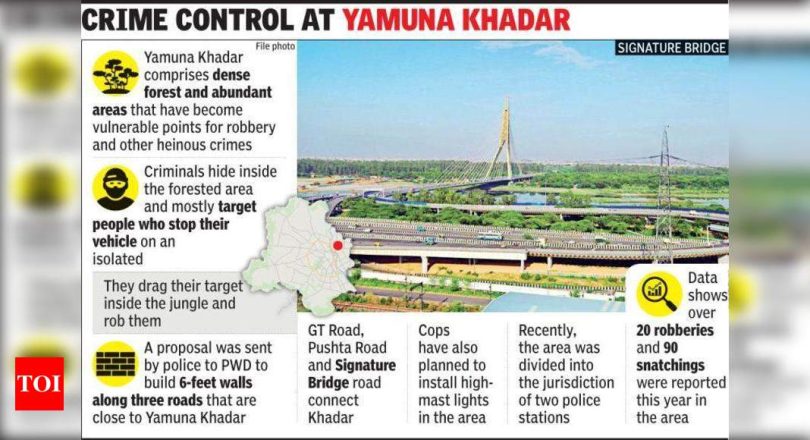 New Delhi: To cut off access to criminals, Delhi Police has written to the Public Works Department to build 6-ft walls mounted with concertina wire along roads skirting Yamuna Khadar in north Delhi. The cops have also realigned the jurisdiction of two police stations, put up warning boards and plan to install high-mast lights to deter criminals.
According to police, Yamuna Khadar is close to Grand Trunk Road, Pushta Road and Signature Bridge Road. A police officer said, “There are plenty of bushes and shrubs in the area and these offer cover for antisocial elements and criminals.”
With these three roads used by people on their way to the business hubs of Gandhinagar and north and central Delhi and by families to go to Signature Bridge, it was important to enhance the security arrangements there.
“To make these roads safe and secure and to stop criminals from easily accessing the forested areas after committing a crime, the easy access to Yamuna Khadar needs to be blocked with a wall,” the officer added.
In a letter to PWD, Sanjay Kumar Sain, DCP (Northeast), wrote, “A boundary wall of at least six feet height mounted with concertina wire with the provision of sufficient light and CCTV cameras may be constructed along the three roads for the prevention of crime and better law and order arrangements in the area.”
Police will also have high-mast lights erected under the corporate social responsibility scheme. “Temporary lights have been installed but a long-term solution is required. We have written to Power Grid Corporation of India to help in this matter,” the officer said.
Yamuna Khadar has also been put under the jurisdiction of two police stations for better crime prevention. “The area was under Shastri Park police station, but we proposed to headquarters a realignment of police station limits. Now New Usmanpur and Shastri Park police stations will police Yamuna Khadar,” the officer said.
Crime data at these two police stations shows more than 20 robbery cases and 90 snatchings reported in the area this year. “Almost 90% of the robbery cases and 70% of snatchings were solved,” the officer said.
Police recently conducted a combing operation in the forest area and arrested three criminals. Fugitives from other states also make the area their hideout. Now, warning boards have also been put up to alert commuters not to stop their vehicles on the roads there. “On seeing a wooded spot, motorists often stop for phone calls or to relieve themselves. This leaves them vulnerable to criminals,” the officer explained.