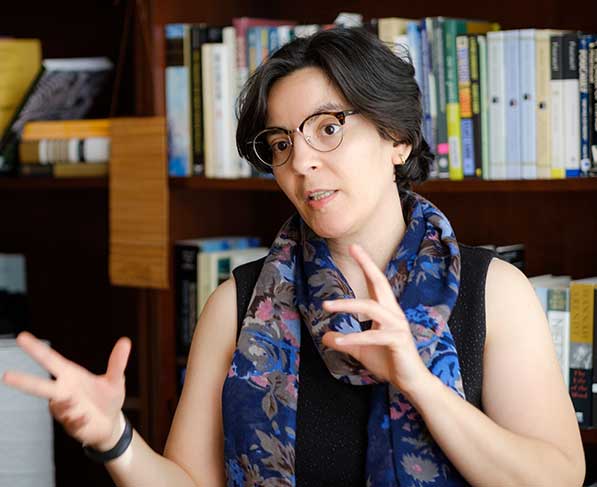 “If the administration of President Joe Biden is serious about countering Chinese influence across the developing world, it would do well to understand how China’s policies actually work and the benefits that the country stands to gain from its efforts in Africa—and across the globe,” she writes.

President Biden is hosting a U.S.-Africa Leaders Summit on December 13- 15 that will be an opportunity for the U.S. to re-evaluate its position in the continent and re-energize its investments.

In this Q&A, Benabdallah discusses the power of building people-to-people connections between developed and developing nations and how policymakers must take seriously the importance of investing in long-term relations with everyday citizens in countries across Africa and elsewhere, regardless of their governments’ ideologies.

Benabdallah is the author of Shaping the Future of Power: Knowledge Production and Network-Building in China-Africa Relations (2020)

How is China investing in Africa?

An important distinction to get out of the way from the start is that neither China nor Africa is a monolithic actor. China’s investments in Africa are a combination of private and public actors, state-owned, semi-state-owned as well as independent or individual entrepreneurs and business people. On the African side, we are speaking about an entire continent of over 50 states, so any generalization should come with this caveat up-front.

China’s investments in Africa can be traced as far back as the Mao era when several African countries were still fighting for their independence from European colonial powers, and China expressed its solidarity by funding a variety of projects across Africa. More recently, starting in the early 2000s, Chinese investments in Africa started to pick up the pace, and China quickly became among the top trade partners and investors in the continent.

Starting in 2017, Beijing began to invest in Africa as part of a project called the Belt and Road Initiative or BRI. The Chinese government envisioned this project as a means to build relationships with other nations and as an opportunity for its banks (that had outgrown internal investment opportunities) to engage in potentially profitable investments, particularly in infrastructure.

The BRI was a project with a global focus, with China targeting $125 trillion dollars in foreign investment across a group of nations that constituted 65% of the world’s population and 40% of its GDP. After a summit in 2017 in Beijing about the BRI, China announced that Africa was an avenue of investment they were going to pursue. By 2021, 39 African countries had joined the BRI. Their primary investment in the region is centered around infrastructure as well as in joint business ventures with African companies.

There have been some quiet discussions within the Chinese government about reducing the number of projects that they will be investing in as part of a potential BRI 2.0. Currently, 60% of China’s overseas loans are held by nations in financial distress, so a potential cutback in investment could occur. How does China’s engagement with Africa differ with Western nations’ relations on the continent?

The primary difference between how Western countries, particularly the United States, engage with African nations and how China does it lies in the way in which investments are treated in the region. When Beijing approaches negotiations with African nations, it is looking to them as partners with whom it can expand business opportunities, rather than as charity cases. With China’s evolving influence in Africa through the BRI, European and American actors are also starting to see African nations as potential strategic partners. This, of course, can be good if African actors can leverage these various partnerships to negotiate better deals for their citizens. Yet, it can also be tricky if African actors find themselves stuck again in a scenario where two superpowers fight over influence and hegemony without much regard for the autonomy or sovereignty of Africans.

What does China hope to gain politically?

A variety of things. First, African markets are huge. The middle class in many African countries is expanding, consumer goods, urbanization, technology products, and so on are all interesting avenues for Chinese enterprises to expand their operations in the continent. Economic influence can also be used as political leverage. Second, in Africa, China enjoys some of the most positive public opinions that it has globally. Getting positive perceptions from Africans is also important as Beijing always tries to frame its rising power as non-threatening. Third, several African state leaders and diplomats have shown support for Beijing in international arenas, from voting support at the United Nations General Assembly to statements of support during the COVID-19 pandemic, among others.

In what ways will this investment affect the U.S. and other developed countries?

The U.S. is hosting African leaders in a summit scheduled for December 13-15. This will be the second summit of this sort for the U.S. (in comparison, China-Africa held eight editions of such meetings already). The summit will be an opportunity for the U.S. to re-evaluate its position in the continent and re-energize its investments.

Secretary Anthony Blinken’s trip to South Africa over the summer and Joe Biden’s Build Back Better World plan that was announced seemingly in response to China’s robust investment in Africa suggests that the United States wants to compete with Chinese interests in the continent. It will be of utmost importance for the U.S. (public and private sector) to show up in Africa with concrete initiatives and investment projects that appeal to Africans.