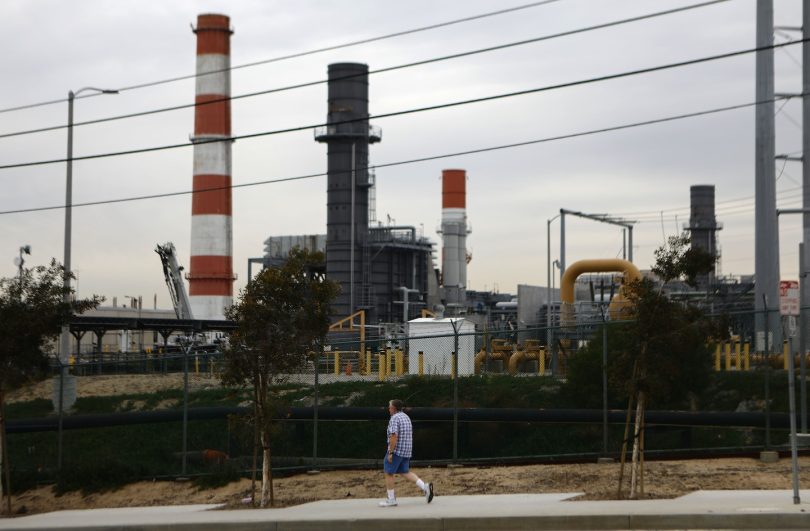 California regulators announced plans Wednesday to speed up the state’s clean-energy transition by cutting demand for fossil fuels by the end of the decade, including ending the construction of new gas-burning power plants — moves that would help combat climate change but could put the state at higher risk of power blackouts.

The proposal, which goes before the California Air Resources Board for a vote next month, lays out how the state could reach its goal of carbon neutrality by 2045, one of the most ambitious timelines in the nation. While it does not have the force of a legal ban on new gas power plants, its approval would make clear to other state agencies, including the California Public Utilities Commission, the state’s current policy.

If California follows through on the proposed plan, planet-warming emissions are expected to fall 85 percent below 1990 levels by 2045. California would also blow past its interim target, which requires that emissions fall by 40 percent by 2030. The new plan anticipates a cut of 48 percent by the end of the decade.

“The climate is changing before our eyes. We need to take action to reduce the worst impacts of a changing climate and there is only one way to do that, break forever our dependence on fossil fuels,” said Liane Randolph, chair of the air board. Yet she cautioned that reaching the state’s targets would be a challenge. The plan “calls for a build-out of renewable energy resources at a rate we have never seen before in this state,” she said.

Gov. Gavin Newsom praised the proposal. “It’s the most ambitious set of climate goals of any jurisdiction in the world, and if adopted, it’ll spur an economic transformation akin to the industrial revolution,” he said in a statement following the plan’s release.

Though an earlier proposal would have allowed the state to expand its use of gas, regulators said they ultimately struck this part at the urging of climate advocates speaking on behalf of disadvantaged neighborhoods near oil refineries and gas plants.

California’s aspirations of transitioning rapidly to clean energy have been frustrated by the continuing threat of rolling blackouts, especially on hot summer nights when air conditioners are buzzing and the state can’t tap power from solar farms.

As California’s wells dry up, residents rely on bottled water to survive

In June, California lawmakers approved a contentious plan, backed by Newsom, that would extend the life of old natural gas power plants and the Diablo Canyon nuclear power plant to help shore up the electricity grid. This week’s action by the air resources board would not affect that legislation, but it would prevent construction of any new natural gas plants, even those built with technology to limit emissions.

In addition, clean-air regulators in September announced a ban on new sales of natural gas heaters, water heaters and furnaces by 2030. That prohibition is part of a new, comprehensive blueprint to meet federal ozone standards over the next 15 years, but also will benefit the climate by reducing carbon emissions.

Under the plan put together by air board staff and announced Wednesday, many of the biggest cuts would come from the transportation sector. California has banned the sale of gas-burning cars by 2035, and the board is working on a proposal to end sales of diesel big rigs, delivery vans and other large vehicles within the next two decades.

But the proposal also calls for rapid electrification of buildings: 3 million all-electric homes by 2030 and 7 million by 2035. If the state is to meet its targets, officials estimate it will need 6 million heat pumps by 2030 and 20 gigawatts of offshore wind energy by 2045.

“The backbone of this transition is going to be having a clean grid,” said Rajinder Sahota, the board’s deputy executive director for climate change and research. Powering millions of cars, trucks and home appliances with electricity will require the state to nearly double its existing electricity generation and quadruple wind and solar power, she said.

Still, California does not expect to quit oil and gas. Older gas-burning cars and trucks will be on the road for years to come, and some of the hardest-to-transition industries, such as cement plants, are not expected to break free of fossil fuels anytime soon. “Existing fossil gas generation will continue to play a critical role in grid reliability” until other alternatives can be deployed, the plan notes.

To address these remaining sources of greenhouse gas, the proposal recommends use of technology to capture and store carbon. Environmental advocates have criticized this part of the state’s plan, saying it relies on experimental technology and would allow polluting industries to continue operating in parts of the state burdened with some of the worst air pollution in the country.

Sign up for the latest news about climate change, energy and the environment, delivered every Thursday