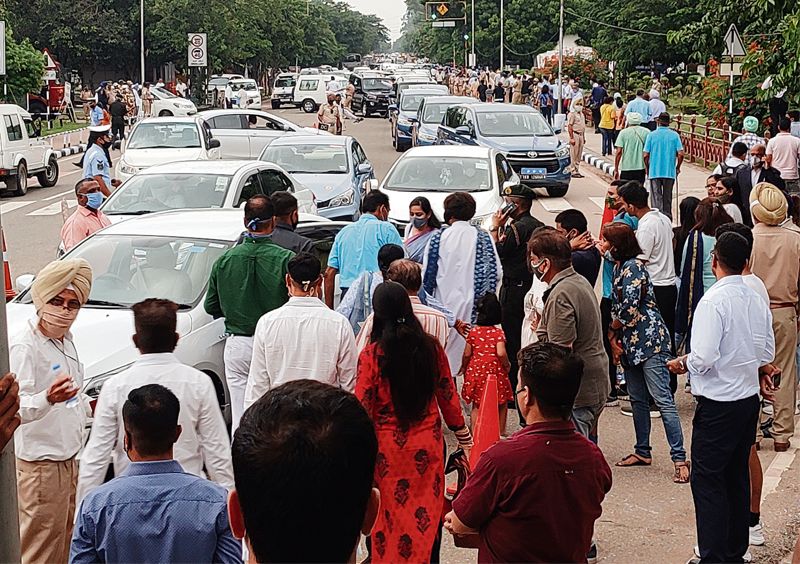 The air show organised at Sukhna Lake today led to a major chaos on roads nearby and inconvenience to the visitors. Vehicles were parked on cycle tracks, road berms and both sides of the roads. There was little police presence on roads to manage the situation.

The event was seemingly marred due to poor planning by the UT Administration as all roads were meant for VIPs and VVIPs barring one, which leads to the rear of the lake. Even before 4.30 pm, when the event was to start, massive jams were witnessed on the road stretch from the Sector 27/28 chowk to Sector 26. Seeing hordes of vehicles, the police diverted these from the grain market light point towards the transport light point. Rather than taking the road to the lake’s rear, vehicles went to Kishangarh village from outside the Bapu Dham Colony road. Seeing serpentine queues of vehicles inside the village trying to head towards the lake, several people parked their vehicles at the village entrance and went to the lake by foot. Some went on in their vehicles. On reaching the rear of the lake, they could not find any parking space. Left with no option, they parked their cars on cycle tracks, footpath, road berms and both sides of road leading to commotion.

“We could not watch the show as we ended up reaching late due to a huge traffic jam. We had to walk 2 km to reach the venue. The village road was full of potholes covered with mud and rainwater,” rued Samiksha, one of the visitors.

Manjeet Singh, another visitor, lamented, “The Administration’s mismanagement was apparent. For VIPs, they had got all roads reserved and the public was left to fend for themselves. They should have done their homework before holding this show, causing huge trouble to people, especially children, women and elderly, who suffered in the humid weather.”

The show venue was too crowded and suffocating for senior citizens. Some people even climbed trees. There was no public address system to inform public about the happenings at the event. Even after the show got over, people kept waiting for the next jets to fly.

After the show ended, people started leaving the venue in a large number. They had a harrowing time as they were stuck in long traffic jams. The police and military vehicles too were caught in the snarl-up. There were scuffles over minor car accidents. “It was all chaos. Arrangements were far from adequate for such a big show. The police presence was too thin. Only a few cops were seen at the junctions,” said a car driver.

A UT official said, “There was unexpectedly huge crowd. Though the police arrangements were made, they fell too little in number for such a huge rush.” Meanwhile, the Covid protocol too went for a toss. There was no social distancing at the venue and people gave scant regard to wearing a mask.