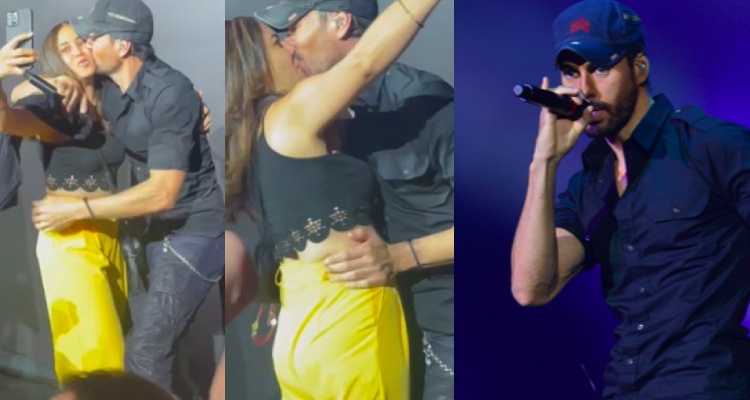 Spanish singer and songwriter Enrique Iglesias, shocked fans after he shared a video of himself passionately kissing a fan. The popular singer who is known for his super hit tracks like Addicted, Hero, etc, took to Instagram to share this video from a meet and greet event in Las Vegas on Friday.

The video is going viral on the internet, in which the singer can be seen kissing a concertgoer on the cheek while posing for a selfie at the event held in Las Vegas.

However, the female fan turns her head and began fervently kissing the singer on the lips, and to her surprise, Enrique continued making out so much so that at one point moving his hands toward her backside before he finally let go of her and ran off with a big smile on his face.

For those unaware, he has been dating Anna Kournikova, a former professional tennis player, for 20 yrs. Netizens who have been taken aback by the intimate moment of the celebrity took to the comment section to express the same.

Sharing the video on IG, he captioned, “Friday night in #LASVEGAS @resortswroldtv see you tonight!!!!,”

The comment section is divided, a person jokingly wrote, “What happens in Vegas, stays in Vegas”, while another stuck up for Anna, writing, “I don’t care how much you love a celebrity you don’t do this to a married person, shame on her.” A third person commented, ” Yet if this was done to a woman…smh absolutely no respect”, a female fan wrote, ” I just want this tight around the waist”

Here, check out the Twitterati reaction to the video:

Singer Enrique Iglesias shares a video of him kissing a fan in Las Vegas.

The media is smarter, but still stupid, does anyone remind me if Enrique ends a party and someone gets angry because he offended him, the media knows very little about the fans.@enriqueiglesias We Love You and Support You Forever #enriqueiglesias

What happens in Vegas stays in Vegas 👀💋🤣 #enriqueiglesias has a super fan in his #lasvegas show 🤣🤳 pic.twitter.com/Xq2KxURkYl