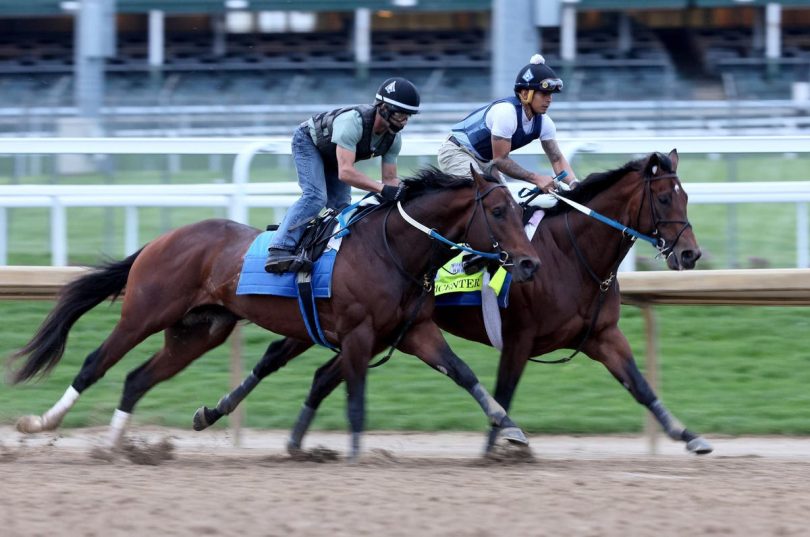 Coming off a good rest since the Preakness, Epicenter tossed off the cloak of his two Triple Crown second-place runs and handily drilled down in a stretch duel to best Zandon for the $600,000 Jim Dandy Stakes (G2) at Saratoga Spring’s charming 19th-century track in the spa-town on Saturday. Tawny Port ran third. With entry Western River scratched, Epicenter’s Preakness nemesis, Early Voting, ran a surprising fourth. Which is to say: Despite his stellar Preakness victory — and his usual fleet, front-running style — theoretically setting him up perfectly for this shorter race, Early Voting ran dead last.

Epicenter’s win was all the more bracing for trainer Steve Asmussen since it was such a “short” race, at a mile-and-an-eighth. What that means is that jockey Joel Rosario and his mount were able to stay in the race and make their alert move in plenty of time to make it matter, something that had not happened in their Kentucky Derby and Preakness efforts. At Off Track Betting (OTB), Epicenter paid $4.20 on the nose, Zandon paid an unsurprisingly low $3.20, and a $2 exacta paid $11.20.

It was Epicenter’s breezy stretch run that sealed it, meaning, the proof of his ability — at whatever distance, not just in the “big” races — to muster his move in time. This will come as a great relief to trainer Asmussen and, if all goes well at Saratoga through this next month, will augur well for the Travers field. Most of these heavy gunslingers were in the Jim Dandy in order to get a contest under their belts for the August 27 showdown.

Because of this pile-on of Triple Crown talent, this running of the G2 Jim Dandy has implications going beyond the Travers. First it’s important to recall that Thoroughbreds don’t just “appear” in the gates at post time — races are integral cogs in the delicate machinery of months-long campaigns intended to ready the athletes for this or that goal. So: the Jim Dandy remains, technically, a G2, but Saturday’s overflow of Grade 1 Triple Crown talent in this running meant that the race was, in effect, transformed into a sleeper Grade 1.

Bottom line, we got to see three of the top three-year-olds in America duke it out again, and the result of that was that Epicenter showed some tactical prowess against fine talent, Zandon couldn’t hold his own down the stretch against that, and arguably the biggest surprise of all, Early Voting abdicated. As such, the Jim Dandy functions going forward as a prism on the fall’s big-money anchor races, the Breeders’ Cup contests. There are a lot of bases for America’s Thoroughbreds to round before the Breeders’ Cup fields are composed, and, among the trainers currently bunking in for the month at the Spa, the Travers remains uppermost in their minds. If the athletes, trainers, and we are very fortunate, this same cast of characters will extend themselves another challenge at a mile-and-a-quarter on the same track at the end of August.