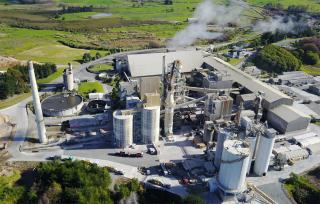 As governments set out plans for decarbonisation, New Zealand could follow the stern example set by Sweden that included witholding a quarry permit from a well established cement producer. New Zealand is similarly poised to take an aggressive stance to slashing carbon emissions to reach net zero by 2050. The cement industry could be put on its back foot as pressure mounts for it to decarbonise quicker, or look towards cement imports or cement alternatives.

New Zealand’s Climate Change draft report, which was released by Prime Minister Jacinda Ardern’s government in January 2022, set out recommendations in three phases, starting at 5.6 per lower emissions than in 2018 over the next four years, before ramping up to almost 26 per cent lower in 2031-35. Delaying would mean pushing the burden to future generations, said Prime Minister Ardern. “The Government will not hold back.”

What does this mean for cement in New Zealand?
New Zealand’s Climate Change Commission is clear that it wants 60 per cent of energy by 2035, including that for manufacturing, to come from renewable sources, compared with 40 per cent in 2022. Coal will be the primary target to phase out quickly in preference of low-carbon fuels. By the early 2030s New Zealand would also aim to reach 95 per cent renewable electricity generation. More biomass and hydrogen are expected to replace fossil fuels, along with solar and wind power.

However, the heavy stick to make heavy industry comply with taking action to reduce its carbon footprint will come in the form of a revised emissions trading scheme (ETS). Carbon prices are expected to cost between NZD30-70/t (US$19-US$44) while increasing YoY. Cash raised from selling units will pay for carbon-cutting schemes. More importantly for the cement sector, it is suggested that there be a phase-out of free units offered to exporters and big polluters but with a possible review if there’s evidence of emissions leakage to other countries.

The Ministry of Environment has stated that: “Currently, New Zealand provides free climate pollution credits to businesses whose international competitiveness is affected by the country’s Emission Trading Scheme. However, some businesses are receiving more support than need as their emission costs are based on old data.”

Pressure to comply will come swiftly. “From 2024, our biggest polluters will receive only the pollution credits they need – making sure they play a major role in meeting the government’s second emissions budget,” the country’s Minister of Climate Change, James Shaw, said.

As well as basing allocations on new data, ministers will have the ability to review allocations where there is evidence of over-allocation and allocations will be reviewed every 10 years.

The case of Golden Bay Cement
The proposed changes to New Zealand’s ETS will redraw qualification permits that have not been altered in the last 12 years. Golden Bay Cement (Fletcher Building Ltd) is aware that it could lose its free ETS credits or see them drastically reduced, opening them up to greater overseas competition and potential job losses. “Should this revision proceed, then Golden Bay Cement will be forced to review the ongoing viability of cement manufacturing in New Zealand,” a Golden Bay statement to the Ministry of Environment said.

The Northland region, where the 0.9Mta Whangarei cement plant is situated, is estimated to account for 41 per cent of the country’s manufacturing emissions. Currently, Golden Bay Cement supplies about 60 per cent of the country’s cement. Investments of more than NZD200m have seen a 14 per cent reduction on the company’s clinker carbon intensity since 2002. “This has allowed us to develop an internationally competitive cement manufacturing facility and produce cement that is 20 per cent lower in carbon than imported cement,” said David Welsh, general manager of Fletcher Building’s concrete division.

Golden Bay Cement strongly believes a re-baselining would simply impose a material penalty and disadvantage on local manufacturing, discouraging the company’s ongoing investment in carbon reduction initiatives. This would further encourage the prospect of higher imports of clinker and the reduction of local cement manufacture, putting its 550 staff in danger of job losses.

Carbon leakage is a huge concern to the local cement manufacturer. A carbon border adjustment mechanism (CBAM) such as the EU’s tool, is seen as a solution for protecting local industry and preventing CO2 emissions from being shifted from one locality to another where there are less restrictions on carbon emissions. But in New Zealand the government has not committed to a CBAM course of action yet. “Our intention is to undertake such analysis in the second half of 2022 alongside Treasury. This analysis will not be limited to the merits of a CBAM, but will consider a range of options available to address emissions leakage,” said an Inland Revenue spokesperson.

Summary
Many important discussions are yet to take place between New Zealand’s government and the heavy industries on how they can provide a fair platform for reduced carbon emissions and the protection of local jobs. There is a need to equate the priorities of transitioning to a low-carbon economy with a cost to industry that is sustainable and does not penalise it to the extent that it cannot compete or survive. Governments will have to decide at what price lower emissions will come at. They have to protect jobs while creating the conditions for less pollution. But can they wait long enough for the technology and further investment to provide the solutions required for heavy industry to become low emitters?