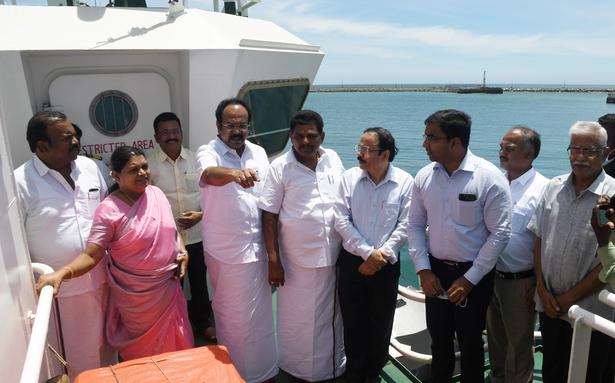 The excavation work at the ancient port city of Korkai in Thoothukudi district got a buttress here on Saturday with the launch of an underwater survey.

Speaking to reporters, he said that though the on-shore works were going on in Korkai since 1968, it was for the first time, the Tamil Nadu government had come together with the National Institute of Ocean Technology and other institutions to undertake underwater exploration.

He said that with divers and experts present here, the first one week may be dedicated to carry on excavation under the sea between Thoothukudi and Tiruchendur. The objective of the excavation, he said was to find out the trade practices that the region had in ancient times with the outside world.

“There are many other interesting artefacts, which may help us understand the trade relations that the ancient people had with the rest of the world,” the Minister said.

To a query, he said that the Korkai ancient port was around eight kilometre under the sea or to be precise it was situated three kilometre north of the Tamirabharani.

“The officials, who are here, have rich experience from multiple disciplines including history, architecture, Tamil culture and among others. The excavations at Korkai have already unravelled a few shells, pots and other artefacts,” he pointed out.

The Minister said that the officials have identified land for constructing a museum at Porunai. Detailed plan and project reports were being readied. The ASI officials led by Sivanandam, VOC Port Trust Chairman T K Ramachandran, Thoothukudi Collector K Senthil Raj and others participated in the inauguration.