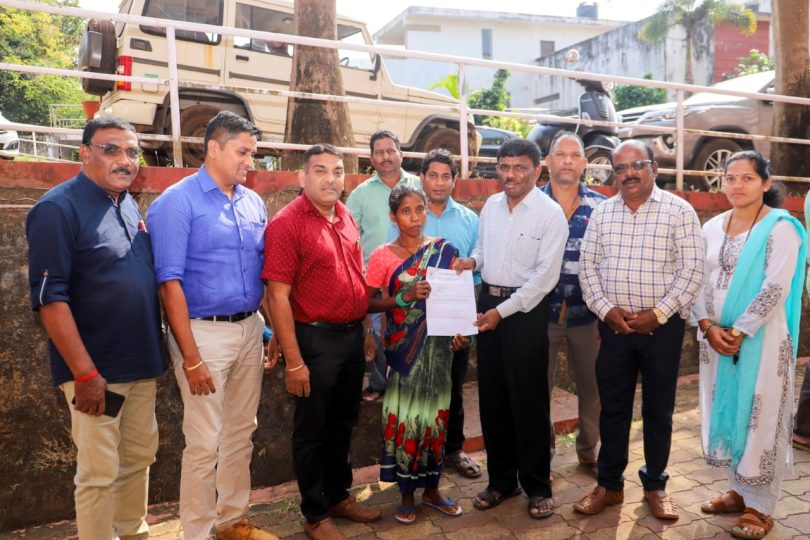 The wife of late Nilu Nagu Velip being handed over a letter of approval/sanction of Rs 5 lakh by Speaker Ramesh Tawadkar in Canacona.

A Padeli (coconut plucker) from Canacona who died in an accidental fall while plucking coconuts has been awarded an insurance claim for Rs 5 lakh through the Coconut Development Board.
The Department of Agriculture processed the claim through the Canacona Zonal Agriculture Office and handed over the Rs 5 lakh sanction letter to the nominee of late Nilu Nagu Velip through the Speaker Ramesh Tawadkar at Canacona on Tuesday.
Nilu Nagu Velip was a coconut plucker who had completed the ‘Padeli Training’ organised under Coconut Development Board scheme in 2021-22.
He died after an accidental fall from a coconut tree while plucking coconuts on May 5, 2022, leaving behind his wife Nisha and their children.
His insurance was done by the Canacona ZAO and according to sources, the Canacona ZAO Kirtiraj Naikgaunkar had persuaded the family to submit the claim and followed it up, leading to the sanction of claim amount.
“I thank horticulture section for pursuing the matter and the Coconut Development Board for sanctioning the claim,” informed Naikgaunkar.
The Coconut Development Board, under the Central Ministry of Agriculture and Farmers Welfare, submitted original discharge voucher death claim settlement of Rs 5 Lakh to Nisha Nilu Velip wife of the deceased Padeli, to complete Bank formalities. The insurance claim has been obtained from Oriental Insurance Company Limited, states the sanction letter.