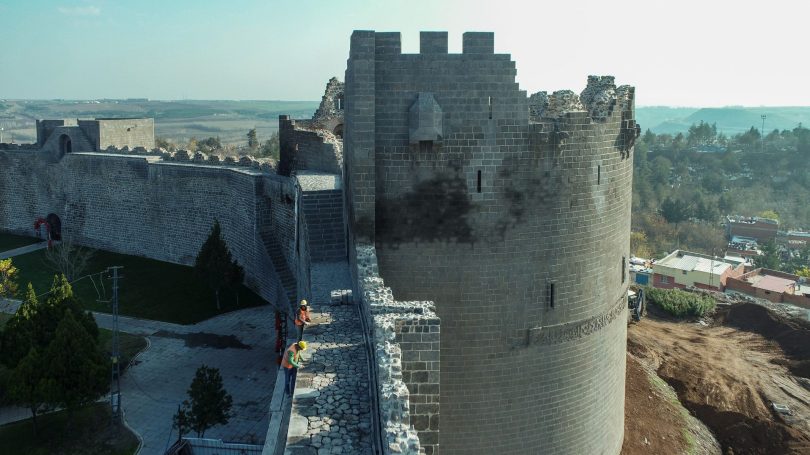 Restoration continues in the 6th stage of the works carried out by Diyarbakır Metropolitan Municipality with the motto of “Resurrection in the Walls”.

The restoration works initiated by the Metropolitan Municipality in order to carry the Diyarbakır Walls, which are on the UNESCO World Cultural Heritage List, to future generations, continue by expanding.

Within the scope of the works, the faulty cement mortar on the exterior of the 39 and 40 bushings, which was considered to have been made in the past, was dismantled, and the wall was repaired with original materials. Injections were also made into the walls in order to strengthen the walls.

Wall cleanings and washings were carried out after the excavations. Repairs were made in places that were destroyed and statically risky.

In the bastions 21 and 22, known as the Urfa Gate, insulation and flooring were completed on the 700 square meter terrace area. Surface cleaning was done inside the bushes. Remains of walls were found on the exterior of bastion number 21.

The works on the exterior of the sign have been completed on an area of ​​approximately 2 thousand 800 square meters. Due to seasonal conditions, productions will be kept outside until spring, and work will continue depending on the suitability of temperature values ​​inside the bush.

As a result of the excavations carried out with precision on the terrace floor of the bastion 39, an Ottoman Period coin was found.