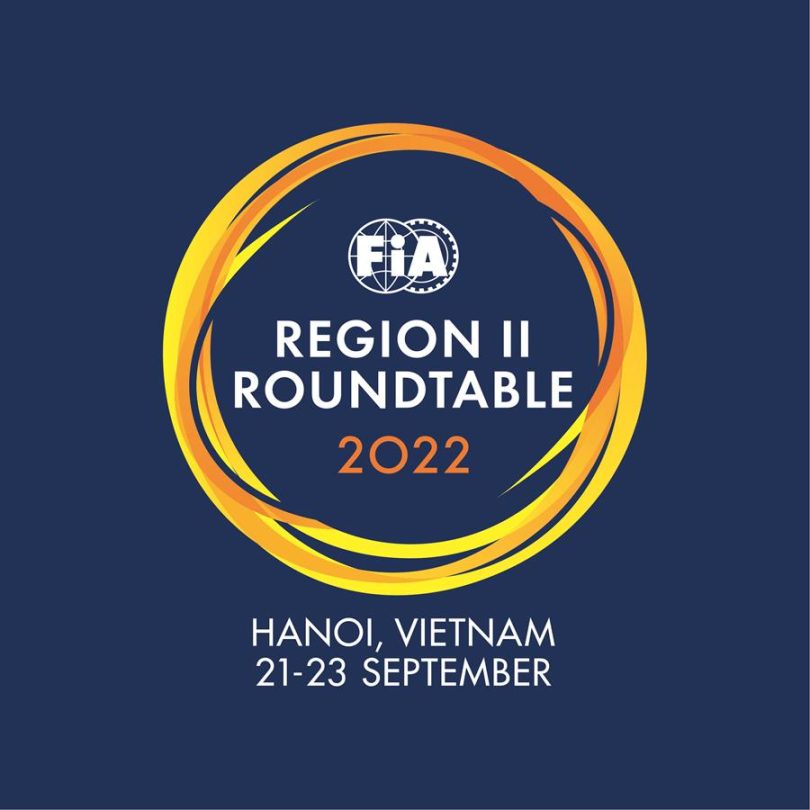 On 22-23 September 2022, the FIA Region II Roundtable will gather FIA Member Clubs from Asia-Pacific at Hotel Metropole in Hanoi, Vietnam on the theme ‘Reconnecting in Hanoi’. Together, they will address the mobility challenges and opportunities in the region, at the kind invitation of FIA Members Automobile Association of Vietnam (AA Vietnam) and AIP Foundation. The FIA Region II Asia Pacific is made up of 24 countries, 19 Clubs and 35 million members.

For two days, over sixty delegates, speakers and FIA executives will discuss the future of mobility in the Asia-Pacific region, with a focus on tourism, road safety, sustainability, youth engagement and innovation. It will be the first physical FIA Region II Roundtable held since the outbreak of COVID-19.

AA Vietnam became a Member of the FIA in September 2018, establishing the first FIA Automobile Club in Vietnam. AA Vietnam offers various mobility services to its members and seeks measures that ensure greater road safety within the country through its partnerships with leading car dealers and manufacturers. To increase its positive impact on society, AA Vietnam profits are re-invested back into road safety projects, advocacy, environmental and climate matters, member benefits, and charitable activities.

AA Vietnam’s strong commitment to lead road safety actions centres around education, infrastructure, research, advocacy and communication, and has been impelled by its President Greig Craft who has been a leading road safety advocate in Vietnam and globally for over 20 years.

After moving to Vietnam in 1989, Craft created the AIP Foundation in 1999 to prevent road fatalities and injuries in Vietnam and low- and middle-income countries of the region. He initially focused on widespread helmet use as a habit for drivers in Vietnam. Craft and a team of international specialists and designers developed the world’s first “tropical” helmet, a lightweight, low-cost motorcycle helmet appropriate to warm and wet climates like Vietnam.

In 2001, Craft established AIP Foundation’s social enterprise helmet factory, Protec, which became noted internationally as a producer of affordable, climate-appropriate helmets. This was hailed a ‘silver bullet’ in child injury prevention. Protec is a social enterprise employing persons with disabilities in Vietnam and aims to provide a product for people at all levels of the economic pyramid. Craft has since continued to expand his focus to other road safety issues including pedestrian safety, speeding, driving skills, safe school zones, and industrial worker education.

As Members of the FIA, AIP Foundation and AA Vietnam work closely together to advance impactful road safety initiatives and drive effective change. Both organisations collaborate with the Vietnamese government to promote the use of safe and certified helmets and establish programmes to increase children safety in school zones.

In March 2022, AA Vietnam collaborated with FIA Member Clubs the Automobile Association of Cambodia (AAC) and the Automobile Association Philippines (AAP) to launch the ‘Power of No’ campaign. Developed in partnership with the Asia Pacific International Spirits and Wines Alliance (APISWA), this public awareness campaign aims to save lives of vulnerable populations across the ASEAN region, change cultural norms around drink driving, and normalise responsible drinking practices for young road users. The ambitious campaign targeting young adults aged 18-30 in Cambodia, Laos, Thailand, Malaysia, the Philippines, and Vietnam has proven successful. In the first six weeks after its launch, the digital campaign saw impactful results with over 23 million people reached, more than 380,000 ‘likes’, comments, and shares on social media, and 93% of people saying they feel compelled to say “NO” to drink-driving after watching the ‘Power of No’ commercial video.  A follow up project “Friends don’t let friends drunk drive” will soon be launched around the F1 Grands Prix in Singapore and Japan, and the Macau Grand Prix.

By hosting the FIA Region II Roundtable, AA Vietnam and AIP Foundation reassert their commitment to leverage the collective power and expertise of the Region’s Members through stronger collaboration.