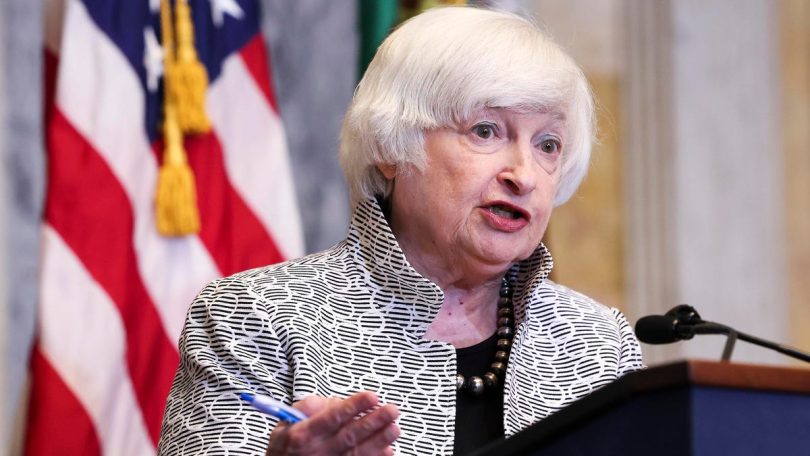 Gas prices could jump again this winter following a months-long decline in the United States, Treasury Secretary Janet Yellen warned Sunday, as the European Union plans to largely stop buying Russian oil in December over the war in Ukraine.

The E.U. hopes to cut off Russian oil tanker shipments to Europe and ban companies from insuring Russian ships that carry oil to other regions like Asia, where Russian imports have increased, a plan that could risk “a spike in oil prices,” Yellen said during a Sunday appearance on CNN’s State of the Union.

Yellen called the threat of rising oil prices “a risk that we’re working on,” adding that a proposed cap on the sale price of Russian oil would help contain costs in the U.S., which have finally fallen after skyrocketing earlier this year.

The price cap would help slash the revenue that Russia earns from oil—which Yellen said the country uses to “fight this illegal war” in Ukraine—while still allowing Russian petroleum to enter the global oil market and “hold down” prices.

The United States banned Russian oil and gas earlier this year and barred Americans from investing in Russia’s energy sector, though unlike in much of Europe, Russian oil only made up a small portion of total U.S. imports.

The average cost for a gallon of gas in the United States dipped to below $3.75 on Saturday, the lowest since March 2, just one week after Russia invaded Ukraine earlier this year. Gasoline and oil prices have begun to subside since skyrocketing after the war began as the violence threatened global crude oil supplies, contributing to the worst U.S. inflation rate in decades. In March, the national average price reached $4.33 per gallon, the highest ever recorded in the United States. Russia, the world’s largest oil producer after the U.S., responded to sanctions from Europe and the U.S. by selling less oil to the west. Last week, Russia even threatened to shut off the Nord Stream 1 natural gas pipeline to Europe if the E.U. followed through with its threats of instituting a price cap. Earlier this month, finance ministers from the G7—a coalition of wealthy nations including the United States—agreed to a price cap on Russian crude oil and petroleum products, but are reportedly still trying to bring other countries on board. A White House official told CNBC the price cap is expected to go into effect before 2023.