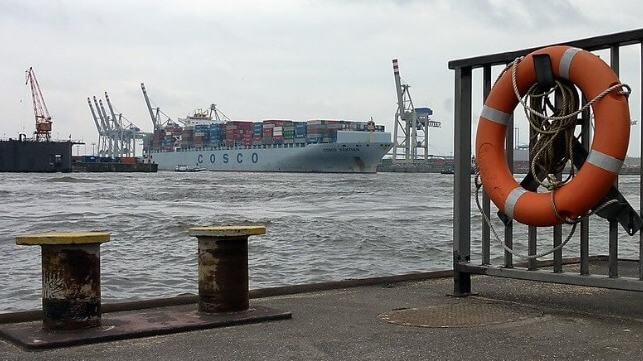 China’s port investments are a point of controversy in jurisdictions around the world, drawing critics’ warnings in Sri Lanka, Kenya, Israel, Djibouti, Greece and many other locales. The key German seaport of Hamburg is the latest to encounter the debate over Chinese influence: China Cosco’s ports division is interested in buying a 35 percent stake in Hamburg’s Tollerot container terminal, and at least one of Germany’s most powerful political leaders is concerned.

The Tollerot deal has been in motion since last year, but conditions on the ground are changing. Germany has pulled back on incentives for trade with China, and it is rethinking its trade policies to reflect security concerns. German Economy and Climate Minister Robert Habeck announced last week that the government is designing policies to counter Chinese protectionism, reduce dependence on Chinese raw materials and intermediate goods, and more closely scrutinize Chinese investments in German infrastructure.

Againt this backdrop, Habeck has voiced opposition to the sale of a stake in Tollerot to Cosco and similar investment deals. “I’m leaning towards the fact that we don’t allow that,” the minister told Reuters.

The German government has reason to be alert to the risks of depending on foreign supply chains: Russian natural gas undergirded German industry’s competitiveness for decades – until the invasion of Ukraine. For political reasons, Moscow has shut down almost all gas supplies to Europe, leaving Germany scrambling to find alternatives at any price. The sudden spike in gas and electricity prices is having a severe impact on Germany’s manufacturing base, which accounts for about 18 percent of the country’s GDP.

In addition, the shutdowns of the COVID-19 era also revealed the risks in depending too much on any one nation – and on China in particular – for critical parts and materials.

For its part, the Port of Hamburg believes that the deal with Cosco is essential to development. “A rejection of the Chinese would be a disaster not only for the port but for Germany,” Hafen Hamburg marketing head Axel Mattern told Reuters. Minister Habeck’s objections may not be the last word: his party is one of three in Germany’s ruling coalition government, and other top leaders may well have a more positive view of the sale.