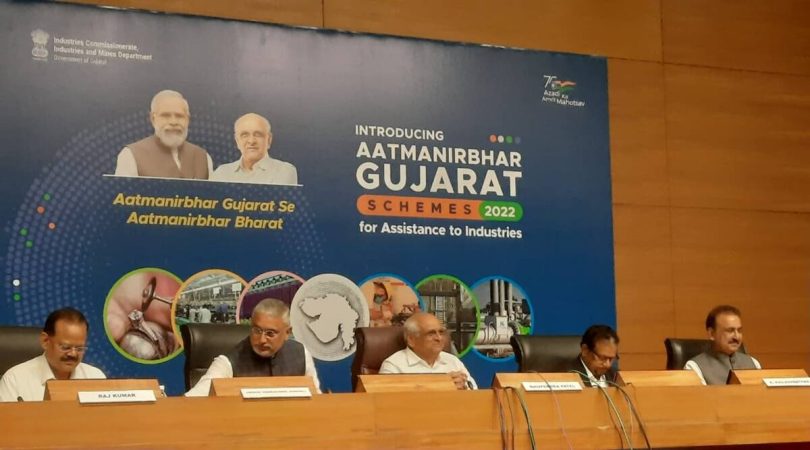 With Assembly elections round the corner, the Gujarat government Wednesday launched an incentive scheme for industries in a bid to lure Rs 12.5 lakh crore of investments to the state in the next 10 years.

The incentives include EPF (Employees’ Provident Fund) and SGST reimbursements.

Chief Minister Bhupendra Patel unveiled the “Aatmanirbhar Gujarat Schemes 2022 for assistance to Industries” which will remain in force for MSMEs, Large and Mega industrial units and is targeted to create 15 lakh new jobs.

A similar incentive scheme, launched by his predecessor in 2016, attracted a mere Rs 1.5 lakh crore of investments.

“The operative period of this scheme is five years for MSMEs and large industries. For mega industries this period is 10 years,” said Raj Kumar, Additional Chief Secretary, Industries and Mines department.

The government did not disclose the quantum of incentives that will be provided through this scheme for industries and burden it will create on the exchequer.

When asked the difference between the scheme launched Wednesday with the one that was in existence in 2016-21, Kumar said, “The new incentives that have been introduced includes refund of Net SGST and EPF reimbursement for 10 years.”

The official said the focus of the government in the new scheme is to connect to the global supply chain and greening of the manufacturing sector.

“It is upto the investor to decide the place of investment. We give attractive incentives to encourage them to invest in weaker talukas. Under the 2016 scheme, we got Rs 1.5 lakh crore of investments out of which Rs 35,000 crore was in MSME sector,” Kumar said.

The EPF reimbursement which is currently existence of IT/ITES sector will now be made available to MSMEs, Large and Mega industries in the manufacturing sector.

Under this, employers will be able to claim 100 percent of their statutory contribution of EPF.

As far as reimbursement of SGST is concerned, industries will be eligible for reimbursement of Net SGST based on the category of taluka (talukas are divided into three categories) the investments are made.

Mega units will be eligible for 100 per cent reimbursement of input SGST paid on capital goods to the extent input tax credit is admissible under Gujarat GST Act 2017.

“The upper limit of SGST will be decided by the eligible fixed capital investment made by an unit,” the official said.

The SGST incentive announced Wednesday replaces the VAT incentive mentioned in the 2016-21 incentive scheme for industries. Like the old incentive scheme, the new one also provides capital subsidy for MSMEs, interest subsidy on term loans and exemption of electricity duty for all manufacturing units.

Mega industries can claim 100 per cent reimbursement on stamp duty and registration charges for purchase or lease of land meant for the project.

Speaking on the occasion, Chief Minister Patel said there were about 8 lakh MSME units in Gujarat.