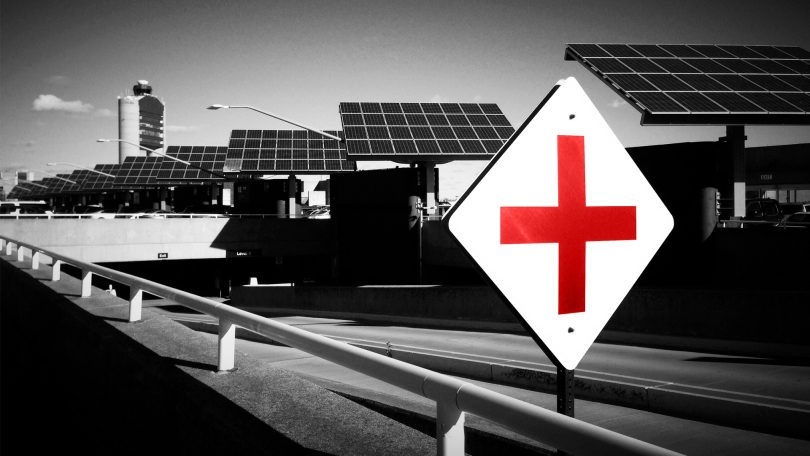 The healthcare sector has a unique responsibility to cut its carbon emissions – and it can improve our health while it’s doing it.

In January 2018, University of Sydney sustainability researcher Arunima Malik and a trio of colleagues published a paper that laid out the path to carbon neutrality in Australian healthcare.

Malik’s team found that healthcare racks up 7% of Australia’s carbon emissions, which is almost half that of the country’s entire construction sector. Around two-thirds of healthcare’s carbon footprint lies in brightly lit, always-humming hospitals, as well as the pharmaceutical sector, manufacturing drugs and medical devices.

Health professionals see the problems every day in the mountains of waste that hospitals produce (think single-use plastics and leftover food) and the energy demands of facilities powered day and night.

But healthcare is often wasteful in a different sense. Low-value care, as it’s known, is healthcare that is unnecessary and delivers little-to-no benefit. “Sometimes too much of what appears to be a good thing can actually cause harm,” says Katy Bell, a clinical epidemiologist and health services researcher at the University of Sydney.

Writing in the Medical Journal of Australia earlier this year, Bell and her colleagues, an anaesthetist and two public health physicians, argue that trimming low-value care, specifically superfluous scans and pathology tests, could deliver huge wins for planetary health because it represents a large tranche of healthcare’s emissions.

“It’s been known for a long time now that particular tests are unnecessary and sometimes harmful,” says Bell. One example: sending someone with non-specific lower back pain off for a scan, rather than reassuring them that their condition will likely improve, encouraging them to stay active, and discussing the psychological drivers of chronic pain.

Or a person contracting an infection in hospital from a procedure they didn’t need, or receiving chemotherapy for a low-risk, impalpable mass detected on imaging that would unlikely cause harm in their lifetime if left untreated.

Recent estimates suggest that up to 30% of healthcare is unnecessary and 10% may even be harmful. Roughly 40% of imaging tests in people with low back pain may also not be needed. But achieving any sort of behavioural change amongst doctors has been a slow grind, Bell says.

The added impetus of the climate crisis, along with a series of analyses from Bell and co that identify carbon hotspots in Australia’s health system, may now help health professionals realise the environmental impact of healthcare practices and perhaps reconsider when pathology and imaging tests are clinically needed.

Cutting back on low-value care “seems like it could be low hanging fruit to try and address the problem of carbon emissions from the healthcare system”, Bell says. And it could provide bigger carbon savings than revamping hospital building design and reducing food waste, researchers say (though they stress every effort is worthwhile).

To be clear, this is about the healthcare sector as a system changing its practices, and not about discouraging people from seeking healthcare when and how they need to.

“We’re trying to define healthcare that still delivers the health benefits for a lower carbon budget,” explains Bell. “So no, it’s not about rationing or cutting down on necessary health care. We actually want to increase beneficial, high-value health care, and do it in a climate-smart way instead of the fairly wasteful system that we currently have.”

So what does a net-zero healthcare system look like? Research shows a multi-pronged approach is needed.

Kate Charlesworth, a public health physician who collaborates with Bell and works with the Climate Council, has also been envisaging a healthcare system that doesn’t cost us so much carbon, if any, or blow our fast-shrinking carbon budgets.

“Everyone thinks that low-carbon healthcare must be about having solar panels on hospital roofs,” says Charlesworth. And yes, switching to renewable electricity is one of the quickest wins facilities can make. Hospitals such as the newly built Royal Adelaide Hospital are also installing systems to capture waste heat and using temperature sensors to make facilities more energy efficient.

“But there’s so much more to it than that,” says Charlesworth. “If you’re going to get to a net-zero health system, you first have to understand what your carbon footprint is.”

Get an update of science stories delivered straight to your inbox.

The first step: prevention. That means bolstering public health and community services, so people don’t wind up in hospital with health problems that could have been avoided or better managed at home, Charlesworth says. But improving public health takes a lot of policy commitment, Bell adds.

Next comes reducing low-value care which may be harmful or risky for patients and which incurs a carbon cost as well. In their latest analysis, Bell and Charlesworth estimate that cutting down on needless pathology tests and excessive imaging requests could save Australia’s health system around 8,000 metric kilotonnes of carbon dioxide equivalent emissions per year. That’s roughly the same amount of greenhouse gas emissions that two coal-fired power stations or 20 natural gas plants spew out into the atmosphere in a year.

“This seems like it would be an easy win. You’re saving these potential carbon emissions without losing any potential benefits to health,” says Bell.

Looking for carbon hotspots in the system, Charlesworth and colleagues found that the biggest contributor to carbon emissions from diagnostic imaging tests was their power use, particularly when MRI machines and CT scanners are on standby (not being used). Each scan is also costly: one MRI or CT scan emits roughly the same emissions as a new European car travelling 145km or 76 km, respectively.

Surprisingly, however, most of pathology’s carbon footprint could be traced back to plastic consumables such as blood collection tubes, rather than reagents or power use. “No matter how green the pathology labs, low-value healthcare has a sizeable footprint wherever it occurs,” the team concluded.

“Each individual test might not have a huge carbon footprint, but collectively, with all the tests that are being done and often repeated, it adds up to a lot,” explains Bell.

The third step towards a net-zero health system, Charlesworth continues, is to decarbonise what you can of evidence-backed medical procedures, practices and products by finding alternatives that don’t compromise patient care. For example, carbon-costly anaesthetic gases can be substituted with intravenous drugs or less potent anaesthetic gases. Using telehealth where appropriate is a way to curb travel-related emissions.

As the bulk of Australian healthcare’s carbon emissions emanate from clinical care and the global supply chains which manufacture and deliver goods, a whole-systems approach that tackles low-value care and involves greening hospitals is the only way.

“We need to educate and engage a whole system of health professionals in carbon costs so we can provide the best care to patients while being cognisant of that impact on the planet and the environment,” says Charlesworth. “Because, ultimately, human health depends on a healthy environment.”

Both Charlesworth and Bell have sensed a recent shift in the healthcare sector towards making the system more sustainable and curbing emissions. “A lot of health professionals didn’t realise the extent of the problem; others who do are now being empowered to act,” Charlesworth says. “So it’s starting to happen, but it needs to happen really fast now, at pace and at scale.

“The climate emergency provides us with the urgency to do this,” she continues. “But so many of the sustainable actions we have to take in health are so well aligned with what we’re trying to do anyway to improve health care: keeping people healthy and well, more community-based care, reducing low-value care, focusing on quality and safety, and incorporating digital innovation advances.”

In other words, what’s good for people’s health is also good for the planet.

Healthcare isn’t alone in its need to cut emissions. Faced with the climate emergency, all sectors need to decarbonise as quickly as possible, from energy and agriculture to transport and food. But the healthcare sector has a unique responsibility to stop polluting the planet, Bell says, because the greenhouse gas emissions it generates in delivering healthcare contribute to poor health.

It’s a vicious cycle: chronic diseases and respiratory health conditions are linked to worsening air pollution, putting added strain on the healthcare system that gets stretched to breaking point when climate-driven weather events hit (and which is unable to provide adequate care in the aftermath). Those extreme events also threaten electricity supplies that power life-saving medical equipment. And leading doctors have warned that Australia’s health system is dangerously unprepared for climate risks.

“So there is that moral obligation [for healthcare to cut its emissions] as well as the necessity to do this to avoid disaster,” Bell says.

A switch to renewable energy would reduce air pollution, leading to less chronic and respiratory health conditions and millions fewer deaths. And if we can then avert further global heating, fewer heatwave days, floods and droughts would transpire and mosquito-borne diseases would spread less, all of which alleviates the pressure on hospitals, especially mental healthcare.

“So many climate actions have huge public health benefits,” says Charlesworth. “That means cleaner air, healthier diets, greener and cooler cities, more connected communities and so on. It’s a win-win situation for climate and for health.”