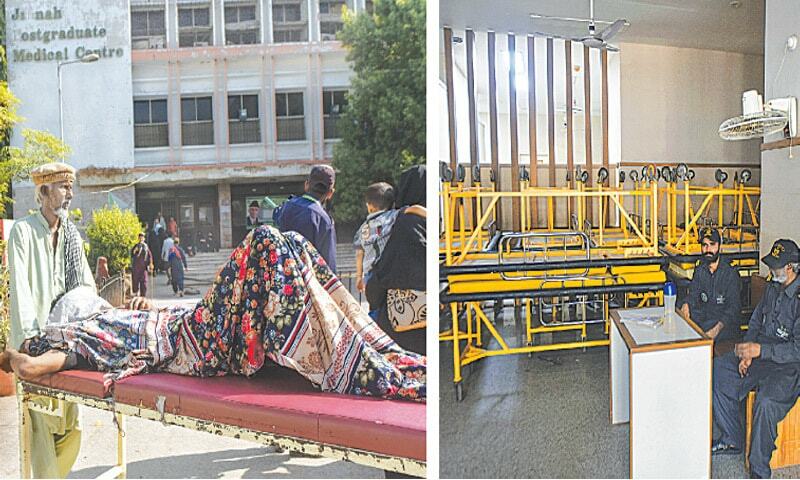 KARACHI: Patient services at public sector hospitals across the province remained suspended on Saturday as health workers in several districts held demonstrations in support of their colleagues, who were beaten and arrested by police a day earlier and later released on court orders.

Sources said healthcare facilities in the province were refusing to take emergency cases, new admissions and even cancelling scheduled surgeries due to acute shortage of staff.

The situation had been persisting since last Monday when junior doctors, nurses and paramedics decided to go on a complete boycott of outpatient departments (OPDs) over their demand for resumption of health risk allowance, they added.

However, the government was neither holding any serious dialogue with the protesting workers, nor was it taking any step to attend to the needs of poor patients, they said.

“It has been 26 days since the staff is on strike here,” Zareef, a patient who visited the Jinnah Postgraduate Medical Centre on Saturday, told Dawn. “People coming from far-flung areas are the worst sufferers. All operation theatres and OPDs have been non-functional for weeks and now the operation theatre of the emergency department had also been closed for treatment five days ago causing death of several patients.”

Zulekhan, an oral cancer patient, shared that it had been two weeks since she had been awaiting admission for her operation at the JPMC.

“Please help me! I have been in pain for several days and need admission for the surgery. I have small children to look after and can’t even afford travel expenses for my visit to the hospital.”

Among those returning home after failing to get medical consultation at the hospital included a brain tumour patient.

“My mother had a surgery for the tumour weeks ago and now she needs a medical examination. But, every time we visit, we are told that the staff is on strike.”

Mustafa, a resident of Keamari, was on his third visit to the JPMC in 20 days.

“I need to have the plaster removed from my fractured leg. But, this could be done only after the doctor sees that my leg is fine,” he said, fearing that the delay in medical examination might cause an infection.

No health department official was available for a comment.

JPMC officials, however, insisted that emergency services were ‘open’, including its operating theatre. “The emergency department is open, where doctors are referring patients for admission, if needed,” said JPMC deputy executive director Dr Yahya Tunio, while conceding that the boycott of OPDs had hampered patient services.

Speaking to Dawn, Dr Faizan Memon of Young Doctors Association-Sindh, part of the GHA, a body representing junior doctors, nurses and paramedics, said that the alliance didn’t close down the emergency services on Saturday as announced earlier on humanitarian grounds.

“But, we won’t give up our demand and march to Chief Minister’s House again on Monday.”

Boycott in other cities

A mock ‘funeral’ of the Sindh government was also staged in Liaquat University Hospital during the protest.

Sukkur: A large number of doctors and paramedics took out a rally from the Civil Hospital to the press club, where they staged a sit-in here.

They criticised police for torturing their co-workers in Karachi.

Mirpurkhas: Paramedical staff and doctors boycotted the OPDs and locked the emergency wards in protest.

Owing to the boycott, thousands of patients in the district faced hardship and were forced to get medical treatment from private hospitals.

In Digri, Jhuddo and Naokot hospitals, medical staff and doctors boycotted all services.