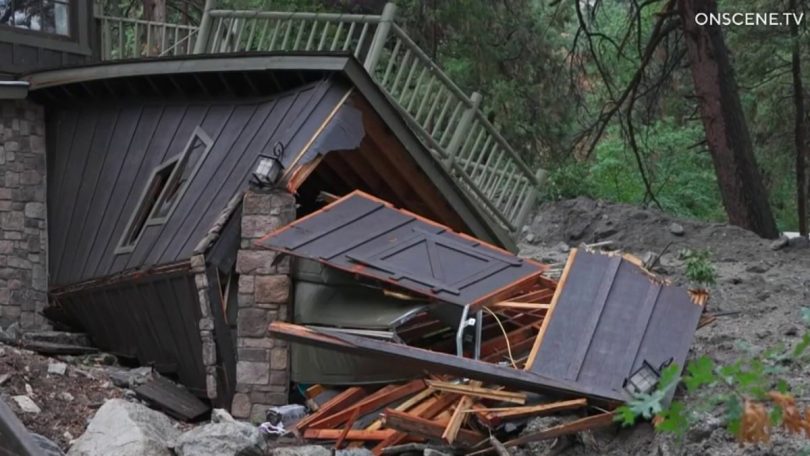 Powerful debris flows damaged homes and cars and washed out roads in several mountain communities on Monday, and evacuation orders remain in effect with a chance for more rain on the way.

Video captured huge waves of foot-high mud rolling down the hillside outside the Oak Glen Steakhouse Saloon in just one example of the storm impacts in the region.

One bike rider told NBC4 that she couldn’t make it up to Potato Canyon because there was an ambulance stuck there. Road closures, like the one at Oak Glen Road and Casa Blanca Avenue early Tuesday morning, also prevented people from getting around, with a thick layer of mud coating the streets.

Many nearby residents said they were just happy their homes weren’t damaged — though others in the area weren’t so lucky.

Monday’s torrential rainstorm left a mess in its wake. In Forest Falls, a debris flow brought huge rocks and boulders down on top of houses. Cars were also buried in the mud, and the situation became so dangerous that residents had to scramble out of their homes and leave the area.

“It’s part of life,” said resident Eugene Gerber. “It’s part of living in the mountain. If you want to live in paradise, there’s always some kind of consequence. For us, it’s floods, fires [and] heavy snow.”

The San Bernardino County Fire Department is helping to clear the roadways in the region now that the rains have slowed down, though more storms could drift over the mountains Tuesday afternoon. Luckily, this time, there are no flash flood warnings in place.

The damage extended all the way to the area of Crestline, with deep, debris-filled water flooding and flowing through several roads and covering cars up to their hoods. Many of those drivers were stuck inside their vehicles.

Part of the reason for the road closures was that the fast-moving waters trapped several cars.

An evacuation center is open at Redlands East Valley High School for those under evacuation orders.