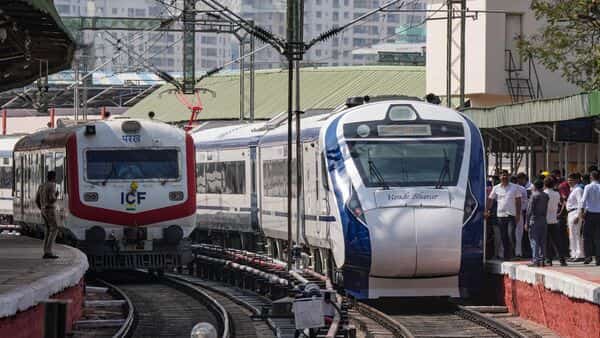 The maximum permissible speed in Chennai –Bengaluru is currently 110 kmph. The work for increasing the speed to 130 kmph in Chennai – Arakkonam section is already completed. Indian Railways’ Southern Railway zone has taken steps for obtaining sanction for the same from competent authority.

“In the Arakkonam –Jolarpettai-Bengaluru section work has already commenced for increasing the speed to 130 kmph. This is expected to be completed by April 2023. once this is done, the average speed of Vande bharat and other trains will also be raised, resulting in further easing of time for passengers,” according to a statement by Southern Railway zone by Indian Railways.

According to Indian Railways, the Vande Bharat service will be a boon for passengers especially businessmen and diplomats who travel regularly on Chennai – Bengaluru – Mysuru corridor. The Vande Bharat train would cover Chennai – Bengaluru (336 Km) in 4 hrs and 30 minutes and between Chennai – Mysuru in 6 hrs and 40 minutes as against 4 hours and 45 minutes (Chennai –Bengaluru ) and 7 hours (Chennai –Mysuru) being clocked by Shatabdi Express.

The ticket fare of Vande Bharat Express is cheaper than Shatabdi Express services. For instance, the ticket fare in AC Chair Car by Vande Bharat Express is Rs.940 only compared to Rs. 1130 in AC Chair Car coach of Shatabdi Express. In other segments, the difference is marginal only, ranging from Rs.15 upto Rs.405 (an average difference of around Rs.200). Features of Vande Bharat Express New Vande Bharat rake is a Semi High speed train indigenously manufactured, under “Make in lndia” by the lntegral Coach Factory, Chennai, Tamil Nadu, and offers a myriad of superior aircraft-like travelling experience. lt is equipped with advanced and safety features including an indigenously developed Train Collision Avoidance System called ‘Kavach’.

All coaches are equipped with automatic doors, on-board hotspot Wi-Fi for entertainment purposes, and very comfortable seating. All toilets are of bio-vacuum type. Every coach has a pantry with facility to serve hot meals, hot and cold beverages.It also has Wi-Fi content on-demand facility and every coach is equipped with 32″ screens providing Passenger Information and Infotainment. For the convenience of differently-abled passengers, facilities such as seat handles with seat numbers in Braille letters, reclining seats in all classes and 180 degree rotating seats in Executive Cars have been provided. This train has also been provided with four platform side cameras outside the coach, including rear view cameras. The improved Vande Bharat Express weighs 392 tons as compared to the previous version of 430 tons.

The train has a composition of 16 coaches which include 14 Chair Cars and 2 Executive Chair Cars. The total seating capacity is 1128.