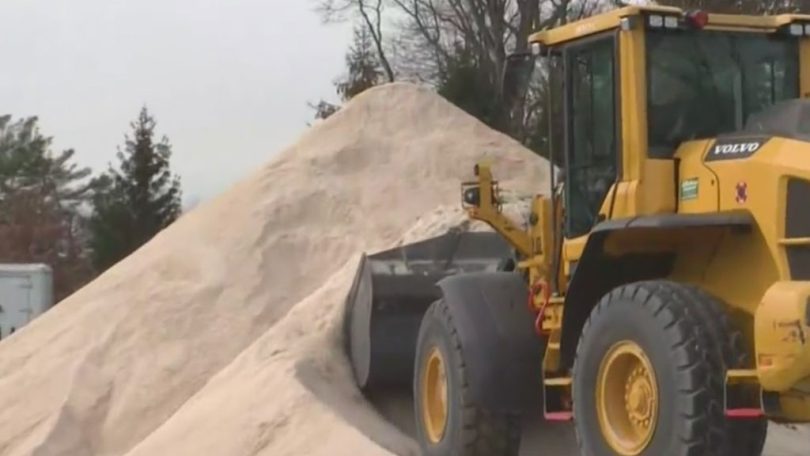 NEW YORK (CBSNewYork) — Hundreds of crews have been deployed to get New York’s roads ready ahead of Thursday night’s snow storm.

New York City has 330,000 tons of salt on hand for the winter. Crews were out brining the roads for hours Thursday evening, preparing for what is expected to be a messy and potentially dangerous morning commute.

Mayor Eric Adams said crews will be ready to keep the roads clear.

“With my Department of Sanitation commissioner and deputy commissioner and they are ready. These guys are professionals. They can move the snow and get our city up and operating, and we’re going to be ready for this storm,” Adams said.

“We are definitely preparing, on the Department of Sanitation’s level, for a pretty decent storm. Not because of the depths, we’ve seen 3-6 inches in New York City before. It’s the timing of the event,” Sanitation Commissioner Edward Grayson said.

That timing is around 4-8 a.m. Friday, lining up a little too well with the morning commute. It will be an event for the fleet of 1,600 plows, they say, which means they’re preparing for at least two inches of snow.

“Travel conditions for Friday morning are gonna be messy and they may be dangerous. Your safety is our number one concern,” said Christina Farrell, first deputy commissioner of the New York City Emergency Management Department.

The city’s emergency management team has its virtual situation room set up to coordinate storm response with its partners, which includes the MTA.

As CBS2’s Jessica Layton reports, the city got a test run on preps earlier this week but lucked out, dodging the storm.

But parts of New Jersey got clobbered, so this could be round two in a matter of days.

CBS2 saw plow trucks getting in position on the turnpike.

“Yesterday, we had a tough time with ice. We’re aware of that. We had lots of folks who were stuck behind accidents. When we can’t get to the accident to clear it, you wait longer,” said New Jersey Department of Transportation Commissioner Diane Gutierrez-Scaccetti. “If you can stay home or, here’s another idea, use mass transit, that would be awesome.”

Gov. Phil Murphy declared a statewide state of emergency that takes effect at 10 p.m. Thursday, reminding everyone the inconvenient combination of snow and wind could lead to power outages.

“Please understand utility crews may not be able to get up in a bucket safely to fix a line in the midst of strong gusts or heavy snow. The reality of the current COVID situation means that some road utility crews are gonna be facing this storm shorthanded,” Murphy said. “We do ask for your patience and understanding, and we ask even moreso than usual given the raging pandemic.”

The New York Department of Sanitation, meanwhile, says about 22% of its staff is out sick, but they say they have plenty of men and women to respond to the storm.