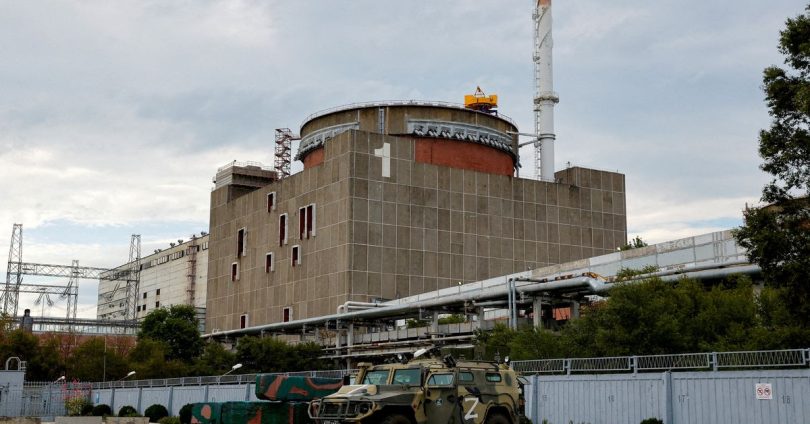 A Russian all-terrain armoured vehicle is parked outside the Zaporizhzhia Nuclear Power Plant during the visit of the International Atomic Energy Agency (IAEA) expert mission in the course of Ukraine-Russia conflict outside Enerhodar in the Zaporizhzhia region, Ukraine, September 1, 2022. REUTERS/Alexander Ermochenko/File Photo

NEW YORK, Sept 21 (Reuters) – The head of the United Nations atomic agency said on Wednesday he would not abandon a plan to create a protection zone around the Zaporizhzhia nuclear power plant despite Russian plans to mobilize new troops and hold a referendum in the region.

Russia and Ukraine have blamed each other for shelling at the site of Europe’s biggest nuclear power plant that has damaged buildings close to its six reactors and risked nuclear catastrophe, including by cutting power lines essential to cooling fuel in the reactors even though they are all shut down.

Ukrainian staff are operating under the orders of Russian forces at the site. Western states have called on Moscow to withdraw its troops.

“Even in the worst of conditions diplomacy should never stop. We can’t throw our hands up and say look at what’s being said, go away and hope that something will happen to solve this situation,” Rafael Grossi, chief of the International Atomic Energy Agency, told reporters on the sidelines of the United Nations General Assembly.

“It’s our responsibility to do it by proposing pragmatic, realistic and physical proposals on the table.”

Russian-installed leaders in occupied areas of four Ukrainian regions, including Zaporizhzhia, on Tuesday set out plans for referendums on joining Russia. Russian President Vladimir Putin on Wednesday ordered the mobilization of hundreds of thousands of Russians to fight in Ukraine.

He said the situation was getting worse on the ground and he was still discussing technical parameters to initially create a protection zone, although a demilitarized zone was his ultimate objective.

Issues being discussed include the radius of the zone and the role of IAEA staff. Two IAEA officials are currently stationed at the plant and form what the agency calls a continuous presence there.

When asked whether the IAEA could enforce such a zone with just two inspectors, Grossi said he was working to expand the watchdog’s presence, but that would not be its job.

“We are an international agency and we don’t have enforcing powers, but we have one power: We tell the truth and we report it and this in itself has enormous value,” he said.