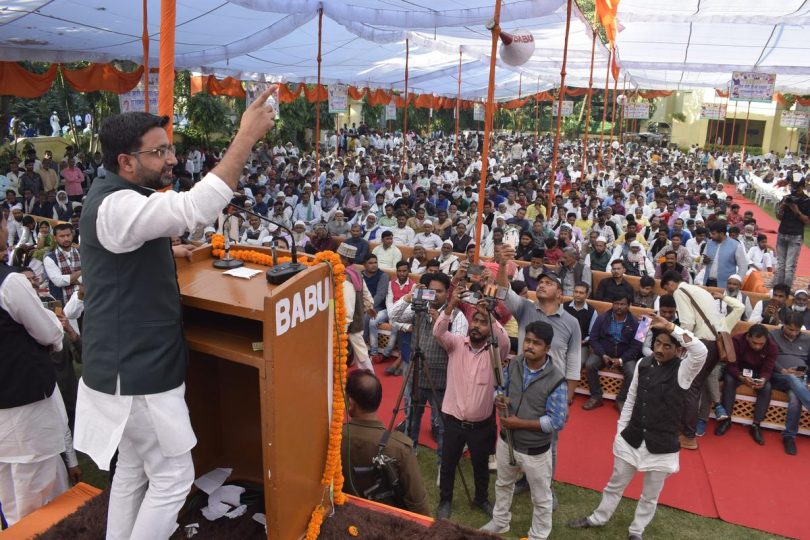 “ Ab Pasmanda Muslim Bade Miyan ka hukka nahin bharega,” thundered Uttar Pradesh Deputy Chief Minister Brijesh Pathak while addressing a meeting of backward Muslims called by the BJP in Rampur earlier this month. What he meant was poor Muslims would not serve the interests of Samajwadi Party (SP) leader Azam Khan in the constituency. Mr. Pathak went on to charge the SP with using Muslims as bay leaf in biryani, which meant the largest minority was used by the second largest party in the State to polarise and divide but were eventually dispensable.

A few days later, a beleaguered Mr. Khan, who is presenting himself as the symbol of Muslim persecution during the BJP rule, retorted the victory of the SP in the Rampur Sadar Assembly bypoll would be the victory of the mazloom (oppressed) in the country. Well, the election flavour is back in the city famous for its cuisine for the third time this year and five months after the electorate voted in the Lok Sabha bypoll.

The December 5 bypoll will not only decide the political fate of the 10-time MLA whose conviction in a hate speech case has necessitated the bypoll, it will also determine the effectiveness of the BJP’s outreach to backward Muslims in the Muslim-majority seat. Out of around 3,80,000 votes, around 53% are Muslims and around 13% belong to Scheduled Castes.

While, Mr. Khan has fielded his protege Asim Raja to save his turf, the BJP has fielded Akash Saxena, the face of anti-Azam Khan forces in the city. Adding salt to injury, Mr. Khan’s name was removed from the voter list after Mr. Saxena wrote to the Election Officer, citing provisions of the Representation of the People Act.

Except for the blip in 1996, the seat is with Mr. Khan and his family since 1980. Earlier, this year, the Muslim face of the SP won the seat from jail by a margin of 55,000 votes. With the Bahujan Samaj Party and the Congress deciding to sit out of the contest, the bypoll is a straight contest between the ruling party and its primary contender in the State.

After losing Azamgarh and Rampur Lok Sabha seats earlier this year, the SP could not afford to lose one more bastion. The SP supporters are waiting for party chief Akhilesh Yadav to hold meetings in the constituency. “We suffered because of his absence in the Lok Sabha bypoll because in the polarised atmosphere, Mr. Khan has lost some of the non-Muslim votes. Akhilesh ji’s presence could bring back their confidence. We are hoping that he would take some time out from Mainpuri to be with us,” said a senior functionary in the local party unit.

On the face of it, the battle for Rampur is between two losers. Mr. Asim Raja was still licking his wounds after the humiliating loss in the Lok Sabha bypoll to Ghanshyam Singh Lodhi, when his mentor asked him to dust off the disappointment and stand for another bypoll. “I am the candidate but people will vote for Azam sahib for the 11 th time,” he said.

Despite being seen as the bulwark behind dozens of cases against Mr. Khan, Mr. Saxena, popularly called Honey, could not wrest the Rampur seat from the SP leader earlier this year. He doesn’t accept it but in many ways he is carrying forward the bitter political rivalry between his father, former BJP minister and MLA Shiv Bahadur Saxena, and Mr. Khan.

Mr. Saxena told  The Hindu that things have changed since the Assembly poll. “The electorate of Rampur have come out of the fear of Azam Khan. It reflected in the Lok Sabha bypoll when in the Rampur Sadar segment, the BJP gathered 13,000 votes more than Mr. Raja. I don’t feel he would be able to fill this gap within a few months.”

He admitted that no election in Rampur could be won without the support of the Muslim vote. “The backward Muslims constitute about 50% of the Muslims and a large chunk of them will vote for us,” said Mr. Saxena. .

On the political impact of Mr. Khan being allowed to become the symbol of Muslim persecution, Mr. Saxena said it could be a view in the intellectual circles in Delhi but on the ground, the tide has shifted. “He has worked against the interests of his own community. There was a time when Rampur had most factories after Kanpur in Uttar Pradesh. Under Azam Khan, the city has been reduced to a town of rickshaw pullers. We will revive the lost glory of Rampur by providing gainful employment to the youth.”

Mr. Raja said the way things had panned out the electorate could see that the government institutions were in a hurry to conduct the bypoll in Rampur. “We have seen how the decision on the Khatauli seat was taken at the last minute when it became embarrassing and indefensible for the government.”

He alleged the administration played a role in keeping the polling percentage low in the SP pockets during the Lok Sabha bypoll.

Simultaneously, he said, the BJP was trying to divide Muslims on caste lines which was dangerous for society. “They organised the rally for the Pasmandas when the model code of conduct was in place but no action was taken by the administration. The party has asked removal of certain officials who are serving in the region for a long time and whose presence could impact the impartial conduct of the poll,” said Mr. Raja.

He was referring to Aunjaneya Kumar Singh, the Moradabad divisional commissioner who was serving as the Rampur district magistrate in 2019 when the hate speech which led to the conviction of Mr. Khan was made.

While Mr. Khan’s supporters cite the former Cabinet Minister’s role in building English medium schools and Mohammad Ali Jauhar University, they don’t necessarily bad mouth the BJP. “The benefits of the government schemes, particularly the PM housing scheme, are reaching us but Muslims need more than just doles,” said Rashid Ansari who runs a tea shop near the Urdu Gate.