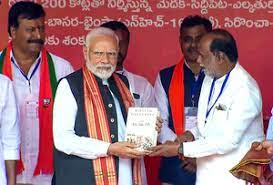 Chennai, Nov 12: India Cements, a company with 75 years of legacy and one of the largest producers of cement in South India, on Saturday celebrated its Platinum Jubilee with pride, gaiety and fervour.
The grand celebration of the company’s seven decades of inspiring journey of excellence in nation building marked a proud moment and joyous occasion for the entire India Cements’ family.
India Cements, a pioneering enterprise of independent era born on February 21, 1946, when the World War was over and political freedom was around the country. It made a humble start with a cement factory in Talaiyuthu, an almost unmapped tiny village in Tirunelveli, which over the years grew to become a self-contained township at Sankarnagar.
From modest beginnings in 1949, when Sankar Cement made its first appearance in the market, India Cements has grown hugely in stature from two plants with a capacity of 1.3 million tonnes per annum (MTPA) in 1989 to 10 cement plants with a capacity of 15.55 MTPA in five States, Tamil Nadu, Andhra Pradesh, Telangana, Maharashtra and Rajasthan.
On the momentous occasion Union Home Minister Amit Shah, who is the Chief guest, unveiled India Cements Platinum Jubilee Corporate My Stamp of Postal Department to mark the celebration of one of the earliest cement Companies that was established around the time of Independence.
The Home Minister along with other dignitaries on the dais through live streaming unveiled India’s first 3D printed monument, ?Ananta Siras?, (meaning infinite wisdom), installed at the company’s Corporate Office in Chennai.
The monument has been designed and manufactured by Tvasta Manufacturing Solutions, (deep-technology start-up focused on construction of 3D printing and related solutions). It is about 22 ft. in height and, made of a special, proprietary 3D-Printable Concrete (also developed by Tvasta).
This is a sustainable concrete- based raw material that ensures the structure’s eco-efficiency, through its minimal carbon-footprint.
Tvasta has a strategic collaboration with India Cements, marking the beginning of an Age of sustainability in the Indian construction industry.
In his address, Amit Shah, said First of all, I would like to convey my hearty congratulations to N Srinivasan and his team because any institution that completes 75 years, you have to prove yourself as a leader only then the 75 years of journey completes.’
Srinivasan ji mentioned that he would thank me but I want to tell Srinivasanji that ours is not a formal relationship. Our friendship bloomed because of the sports industry. When he was associated with Chess association, I was the President of Gujarat Chess Association.
And, when he became the Secretary and Chairman of BCCI, at that time I was the President of Gujarat State Cricket Association. I have seen Srinivasan ji work in sports organisation. Inside Sports organisation, Srinivasan ji created opportunities and possibilities, exploring them to 100 per cent and to make better lives for the sports persons and showed a new pathway to all”, he said.
For any country’s development, the basic requirement is infrastructure and to make the infrastructure better the basic requirement for this would be the cement.
Cement production should be of good quality and I can say that India Cements in the cement industry has contributed good quality cement right from their beginning and grown to produce 15.5 million tons and with 10 factories and is contributed the cements to our country”, Amit Shah said.
Our nation is traveling strongly towards the development of the country. And today, I have faith that in 2025 that India will become a 5 trillion-dollar economy for sure. I can say this for sure because in just eight years India’s economy from 11 it has come down to five”, he said, adding, Recently, there is a report from Morgan Stanley that in 2027 India will reach the third place in World’s economy and no one can stop that. and, for this, infrastructure is very important.
N Srinivasan, Vice-Chairman & Managing Director, India Cements, said ?There is a lot to learn from our Home Minister (Shri Amit Shah)?meticulous planning. I have seen him, minute learning is his forte, and then excellence in execution, I wish we had one of those.”
He succeeds because he has attention to detail. He succeeds and not only does he have attention to detail, he never loses his temper. His focus is very strong.
These are the few things I learnt in the interaction I have had with him. If he thinks of something, he only thinks of that. So, I learnt a lot, and to have such a person as a chief guest is not a tribute to me, it is a tribute to the founding fathers (of India Cements)”, he said.
Cement is a building block. This is truly a home-grown industry. India is one of the few countries where you not only produce a lot of cement, you consume it also, still the rate at which infrastructure is developing under your government, still there is not enough cement. So, the existing cement industry will have to expand very fast”, Srinivasan said.
When I came back from the US in 1968, the cement industry in India was only 19 million tonnes, that was the capacity of the country. Today it is 400 million tonnes. There are only seven states in the country where limestone is available. Demand is all over India, but it is produced only in three or four places.
One fact about the cement industry that is not fully appreciated is, the largest producer of Cement is China – 2.4 billion tonnes – after that comes India, 450 million tonnes. After us comes America, which is 70 million tonnes. Leave aside China and its size, we are by far the largest and the most sophisticated producers.”, he said.
(UNI)