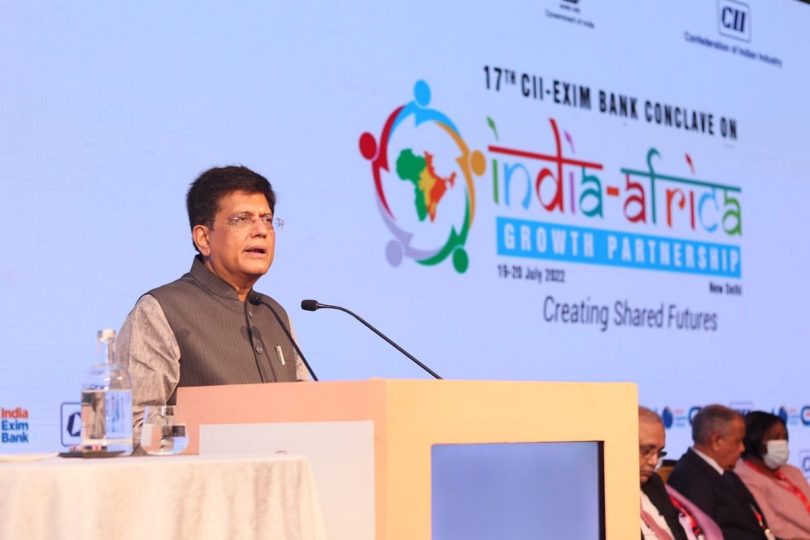 The government has called for diversification of the trade basket between India and Africa and for deeper cooperation in bilateral investment.

Government wants African countries to leverage the preferential market access offered by India even as research by the Confederation of Indian Industry has identified a potential bilateral trade of $200 billion by 2030 with a compound annual growth rate of 12 per cent.

This would be a quantum jump from the $89.6 billion India-Africa bilateral trade in 2021-22, the highest ever. Indian exports to Africa stood at $40.3 billion, encompassing petroleum products, vehicles, pharmaceuticals, cereal and machinery, while imports from Africa at $49.3 billion included mineral fuels, gems and jewellery, copper products, fertilisers and inorganic chemicals.

The growing bilateral trade between India and Gabon has crossed $1.2 billion in 2021-22 despite the pandemic and investment opportunities in the Gabon Special Economic Zone (GSEZ) have attracted 54 Indian companies which have set up manufacturing units in various sectors like pharma, timber, mining, steel and food processing.

The focus has now turned to widening of the trade basket with Gabon and deeper cooperation in bilateral investment with new areas for cooperation emerging, particularly in mining, defence, agriculture, healthcare, pharmaceuticals, renewable energy as well as in skill development/training and capacity building in key sectors, including quality standards.

The “Emergent Gabon Vision 2025” plan also offers India an opportunity to partner in the country’s economic transformation and diversification.

Patel has also suggested further strengthening, diversification of trade and economic linkages with Sudan during an interaction with Minister of Trade and Supply Amal Salih Saad Mohamed.

The bilateral relations with a focus on trade and investment, defence and maritime cooperation have a strong basis in the presence of Sudanese students pursuing higher studies in institutions across India which has also partnered in undertaking development projects and capacity building in the African nation.

The government is also keen that Sudan should effectively utilise and benefit from the preferential market access offered under India’s duty-free tariff preference scheme for least developed countries.

India, however, has a larger agenda of an intense pan African engagement and this resonates in the CII study which indicates that Indian investments to Africa can go up to $150 billion by 2030 as the bilateral economic ties expand into various new sectors of opportunity.

The CII report on leveraging new dimensions in economic engagement released by Commerce and Industry Minister Piyush Goyal at the CII-Exim Bank Conclave bases the forecast on the resilience of the Indian and African economies and the numerous emerging sectors driven by digital technologies and the green economy that the businesses of both sides can tap to the optimum.

The report identifies four large target economies as South Africa, Egypt, Ethiopia and Algeria and priority areas of investment in Africa as agriculture, construction and infrastructure and manufacturing.

While India has invested $74 billion in Africa since 1996, these flows are concentrated in Mauritius and are majorly by public sector companies for energy and raw material assets. The continent’s agri business, agri infrastructure, post-harvest infrastructure, technology and food processing can benefit from Indian investments.

Under the manufacturing sector, India can pitch for India-specific special economic zones in Africa that can produce for the African, Indian and third markets, among other recommendations.

The CII report recommends greater participation of India’s services sectors of banking, financial services, healthcare and education to benefit both sides in the continent. Indian banks can consider setting up more branches in Africa to offer services to Indian companies.

Export insurance and new instruments of financing should also be considered by India. For healthcare and education, CII suggests financing options from international finance institutions to help drive new infrastructure creation which would be timely given Africa’s growing digital footprint.

In terms of future prospects, Banerjee feels partnering in the digital revolution and emerging areas such as start-ups, digital economy and innovation will place India-Africa economic partnership on a higher trajectory, allow Indian companies to address new markets in the continent ranging from fintech to edtech, agri-tech and health-tech and link the aspirations of the new generation in both the geographies.

Also Read: How India Reduced its China Dependence For Toys