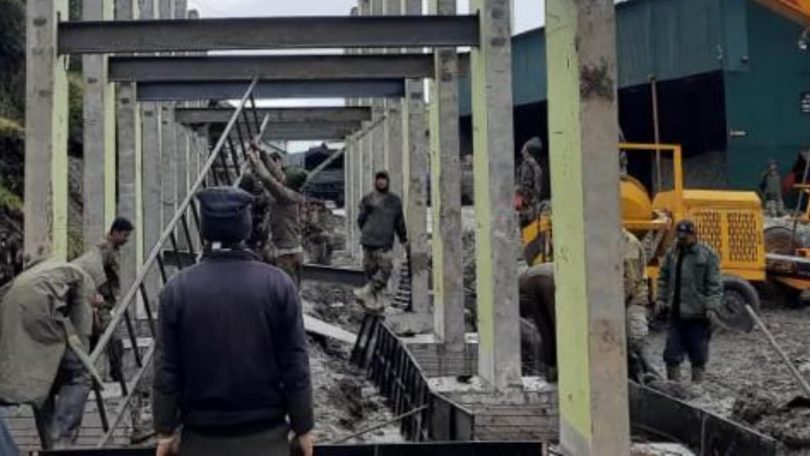 India has significantly ramped up border connectivity along the Line of Actual Control (LAC) in the last two years with the construction of multiple roads, bridges, tracks and tunnels, amid the continuing standoff there with China, top defence sources said on Tuesday.

Several other critical infrastructure projects—aimed at further improving civilian access and faster mobilisation of troops to border areas—are in progress at present.

Much of the construction work is being carried out by the Army’s combat engineers and the Border Roads Organisation which functions under the ministry of defence.

Construction of alternate roads to the LAC and other feeder roads connecting them are among the strategic border infrastructure projects undertaken by the government.

Work on a strategic road—which will be an alternate route connecting Manali in Himachal Pradesh to Western Ladakh and the Zanskar Valley—is underway at present.

The 298-km-long road—slated for completion by 2026—will also have a 4.1-km twin-tube Shinkun La tunnel for providing all-weather connectivity, which is likely to get a defence ministry nod soon.

So far, the only access road to Leh from Manali is the 477-km Manali-Leh road, which is located at a height of 13,500 ft in the eastern Pir Panjal range of the Himalayas and experiences heavy snowfall every year. This axis has got three important passes — including the Rohtang pass, Baralacha La and Tanglang La.

Additionally, bridges on the strategic Durbuk-Shyok-Daulat Beg Oldie (DS-DBO) road are being upgraded to Class 70 specifications, which can carry a weight of up to 70 tonnes.

For the longest time, the 255 km DS-DBO road—which runs parallel to the LAC —has been the only road to reach DBO. As many as 35 bridges on the road have been planned as permanent or extra-wide bailey bridges. Bridges with a length of 150 km have been taken as a priority, and the rest will be taken up next year.

The source said construction of tunnels, caverns and underground ammunition stores is in progress.

Presently, the construction of nine tunnels is underway, which includes the 2.535-km-long Sela tunnel, which will be the highest bi-lane tunnel in the world once completed. Eleven more tunnels are also under planning.

Overall, the BRO has constructed more than 60,000 km of roads, 693 major permanent bridges totalling a length of 53,000 metres, and four tunnels with a total distance of 19 km. This includes the Atal Tunnel which holds the world record for being the longest tunnel (9.02 km) in the world above 10,000 feet and the construction of the world’s highest motorable road over Umlingla.

In the last two years, the Army has induced indigenously made landing crafts in both eastern Ladakh and Sir Creek at India’s western border.

“This has given an impetus to the patrolling capabilities at the Pangong Tso with the boats being capable of carrying up to 35 troops,” a defence source said.

The sources said that since the Galwan Valley clashes in June 2020, habitats which can house 22,000 troops and technical storage for 450 armoured personnel carriers and guns, have been constructed at the high-altitude areas of eastern Ladakh.

“The habitats are modern, compact, state-of-the-art and can be moved from one place to the other. There is now a focus on the construction of permanent defences and infrastructure for better preparedness,” the source quoted above said, adding that these would be 3D-printed permanent defences which can withstand tank fire and have been extensively trial-tested.

The source explained that multiple trials have been undertaken for the 3D-printed defences, and the Army has engaged with several startups for the process.

A 3D-printed shelter for the living of officers and JCOs has been constructed in the desert sector and four more such double-storey shelters are being constructed in the Eastern Theatre. They can accommodate 64 personnel and construction will take just 25 days.

As per sources, construction of multiple airfields in the border areas, along the LAC, has also picked up pace in the last two years. While overall BRO has constructed 19 airfields, two airfields at Barrackpore and Bagdogra in West Bengal are currently at an advanced stage of completion.

BRO will soon begin constructing one of India’s highest airfields at Nyoma. The organisation has also undertaken a number of infrastructure projects in neighbouring countries such as Afghanistan, Myanmar, and Bhutan.

Infra push in the Northeast

As reported by News18 earlier, the Northeast has seen a major infra push in the last two years. Major strategic projects in the pipeline are the 2,000-km-long Thingbu-Vijaynagar border highway along the McMahon Line which would be constructed at a cost of Rs 40,000 crore.

Construction of three inter-corridor highways which will connect the three horizontal national highways across Arunachal Pradesh –including the Frontier Highway, Trans-Arunachal Highway, and East-West Industrial Corridor Highway—is also in the pipeline.

The sources said multiple roads and bridges have also been constructed near Doklam and north Sikkim areas, thus improving India’s reaction capabilities there.

There has been a push to construct additional helipads and airfields in the Northeast, particularly in the remote areas of eastern Arunachal Pradesh.