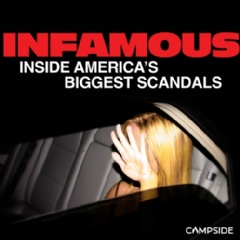 New Podcast Explores Some of the Centurys Biggest Scandals Through Eyes of Two Magazine Writers, Including Girls Gone Wild and Exclusive Interviews with NXIVMs Allison Mack and Keith Raniere

Campside Media and Sony Music Entertainment today announced the launch of Infamous, the all-new podcast from acclaimed journalists Vanessa Grigoriadis and Gabriel Sherman, special correspondent to Vanity Fair and author of The Loudest Voice in the Room, diving into the most explosive scandals of this century. From high-profile divorces to sex cults to the lies that started a war, Campside co-founder Grigoriadis (host of Fallen Angel and Run, Bambi, Run) and Sherman will guide listeners through the juiciest stories of the last two decades, providing a behind-the-scenes look at what it takes to shine an unflattering light on the worlds most powerful people.

The shows premiere episodes explore and expose the incredible story behind Joe Franciss rise and fall as the creator of Girls Gone Wild. Available today as a full series on The Binge, Boy Gone Wild tells the saga of a volatile founder watching his empire crumble while going toe to toe with an old school Florida mayor, a kinky blackmailer, and his own ruinous egomania.

Told through the unique lens of the journalists who covered these cases, Infamous includes exclusive, never before heard archival compiled during high-profile magazine pieces penned at the height of these stories  as well as a contemporary point of view. Infamous unpacks the downward spiral of American culture, one infamous story at a time. The series features exclusive interviews with people who have never previously spoken on the record, including actress and high-profile NXIVM member Allison Mack.


After reporting on these scandals for years, I look forward to dissecting the real stories behind the headlines. said host Vanessa Grigoriadis, Infamous gives listeners a chance to hear directly from the people involved in these stories in their own words, and uncover new insights and twists for the very first time.

Weve lived with some of these stories for decades, but there is so much more to be said about the way that journalism reveals the truth behind powerful people, said host Gabriel Sherman. Were excited to bring listeners along on this journey as we dissect and reveal the incredible truth behind some unbelievable stories.

Subscribers to The Binge can access all six episodes of Boy Gone Wild today. For weekly episodes, listeners can subscribe to Infamous on all major podcast platforms, including Apple Podcasts, Spotify and Stitcher. For more information on other Sony podcasts, follow @SonyPodcasts on Twitter and Instagram.

This news content was configured by WebWire editorial staff. Linking is permitted.