From Louis XIV’s vision for Versailles to Balenciaga’s homage to the sari, Inspired by India explores how our textiles and craft impacted global design. But what’s the line between cultural appropriation and appreciation?

From Louis XIV’s vision for Versailles to Balenciaga’s homage to the sari, Inspired by India explores how our textiles and craft impacted global design. But what’s the line between cultural appropriation and appreciation?

The fashion industry has been undergoing a reckoning in recent years, one in which questions of appropriation or appreciation have become defining parameters when taking inspiration from cultures, communities and crafts. So many things that would have passed unnoticed even 10 years ago, now seem problematic: be it white models dressed up as tribal gopis on Paris catwalks, or brands appropriating the aesthetics of handmade block prints for mass-produced fast fashion. But the reduction of Indian communities and their symbols to “exotica” are products of a relatively recent history that belies the complexity of the country’s role in global fashion and luxury for millennia.

Today, the idea of European savoir-faire dominates the global geography of luxury. So, it is all the more ironic then to realise the extent to which Indian textile traditions and forms of dress have shaped the contours of this luxury — notably through histories of trade in textiles and, more recently, the role of Indian embroidery in luxury supply chains.

History shows that the superior artistry of our textiles came with associations of a place with a superior order of life. Fine textiles from the courts of Shah Jahan, descriptions of which were relayed through 17th century travellers, are believed to have helped fuel Louis XIV’s absolutist ambitions and vision for Versailles. But the sheer depth and scope of India’s contribution to global fashion began in Roman times and accelerated between the 16th and 18th centuries — playing an essential role in transforming ideas of gender, body, comfort and leisure in Europe and America.

A fitted women’s chintz jacket (1750) cut to display the chintz imported from the Coromandel Coast. In the Netherlands in the 18th century, chintz jackets were popular for daily use and worn as part of traditional costume
| Photo Credit: Rijksmuseum, Amsterdam

In Napoleonic France and through the novels of Jane Austen in Regency England, we see how wearing fine Indian muslin denoted the consumer’s status, taste and connoisseurship. Such was the popularity of textiles like the brightly-painted chintz, that France and England placed decades-long bans on their import in the 18th century in order to protect their own silk and wool mills. However, the desire for these vibrant textiles meant that despite hefty fines, they were smuggled as contraband and worn in the privacy of the home.

Of jewels, settings and stereotypes

Indian jewellery has also long incited desire and envy. The erstwhile maharajas were corralled to play the part of passive partners during the Raj, often required to dress up in their bejewelled finery to attend events like the Delhi Durbars and legitimise Queen Victoria as Empress of India during the height of colonial rule. Perhaps this coercion into auto-Orientalism made so many Indian princes seek an alternative aesthetic to the one harnessed by the Raj. Disenfranchised, they sought self-expression in a language of modernity they could make their own. They flocked to jewellers in the Place Vendôme, Paris, to have their jewels reset. In turn, these commissions deepened Parisian jewellers’ knowledge and understanding of Indian jewels and setting techniques. Maharajas’ jewels inspired a style that has become iconic of early 20th century jewellery: mixing exquisitely carved Mughal gems and ineluctably Indic colour combinations with the elegant lines of Art Deco.

Now, the glittering fantasy world of the maharajas has been reclaimed as an aspirational form of heritage luxury for Indian consumers, notably in the massive wedding market. Closely aligned with Bollywood and celebrity-driven wedding trends, some argue that this world of maharaja chic is so fantastical as to be beyond questions of appropriation. A similar argument is made for many facets of Indian culture, such as the paisley motif, which are the product of deep global entanglements where it is difficult to establish where one cultural imprint ends and another begins.

Nonetheless, this vein of thought does not address how images and objects are often used in ways that may serve to reinforce certain stereotypes of India to the exclusion of other representations. Nor does it account for the labour that lies behind its aesthetics, notably the work of India’s artisans, who embroider, embellish and weave some of the country’s most recognisable symbols of heritage and identity. 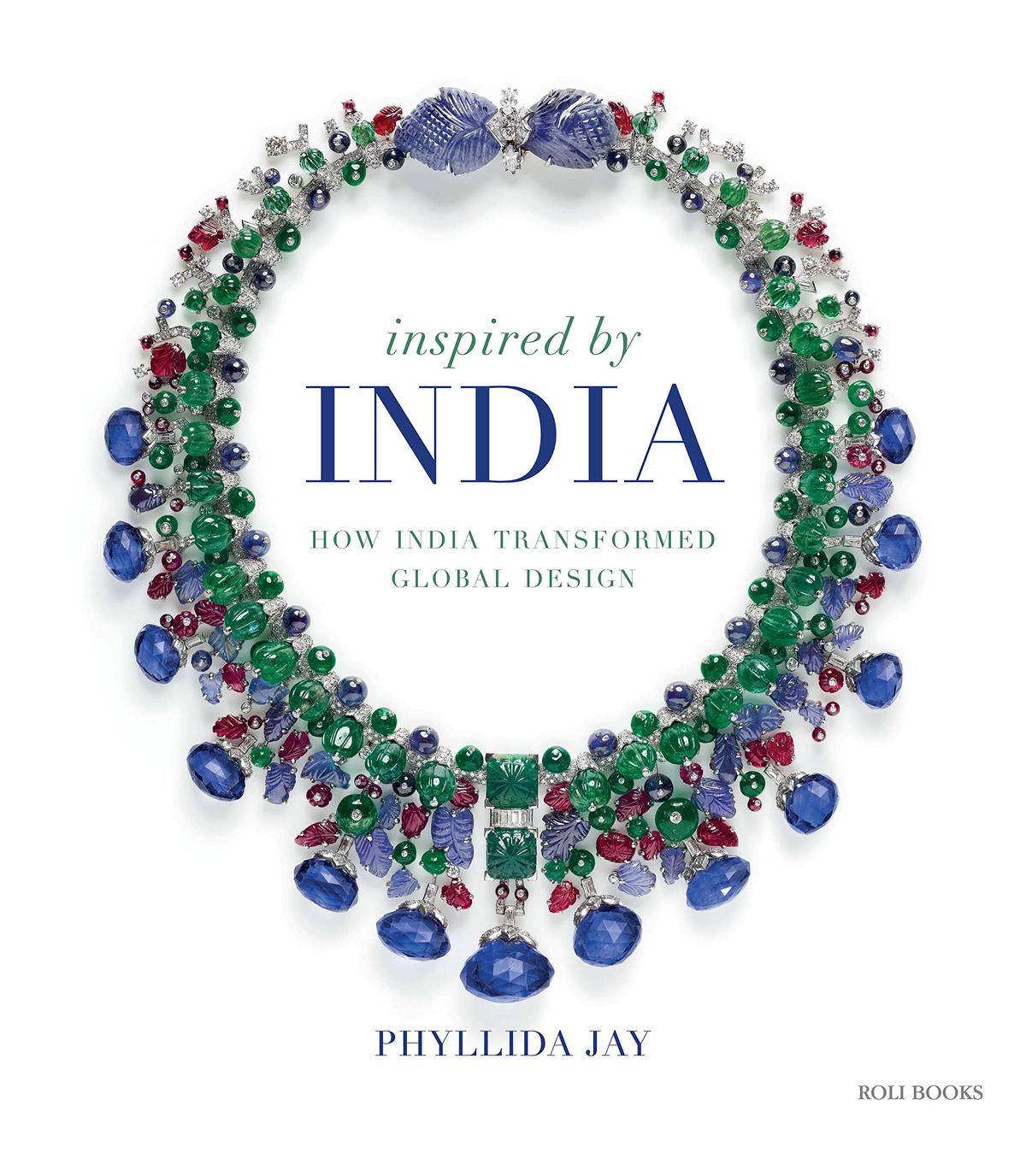 The book cover of Inspired by India

All of this begs specific questions: how can India’s rich cultural heritage inform designers in ways that overcome reductive stereotypes, and reward and recognise the communities and artisans upon which fashion and luxury so often depend? How can we transcend bounded and proprietary ideas of culture that often lurk in debates around cultural appropriation? What can history, which spans the spectrum of appropriation, exploitation, colonial domination, and transculturation, tell us about the present and, more importantly, the future?

When the drape went to Europe

In Inspired by India, the chapter on the sari tackles one of India’s most enduring symbols. Its global representation has often lurched into exotica, influenced in no small part by the blingy aesthetics of our greatest cultural export, Bollywood films. Yet a more nuanced study of the sari reveals its role in inspiring radical approaches to the body through fashion by some of the most iconic 20th century designers. For example, Cristóbal Balenciaga studied the drape and interpreted it in an innovative and respectful way that paid homage to it. We see a similar depth of engagement in the work of Gianfranco Ferré and Madame Grès. This anticipates the innovative work of designers like Tarun Tahiliani, Amit Aggarwal and Gaurav Gupta. Now, a fresh generation of photographers like Ashish Shah, Prarthna Singh and Rid Burman are challenging stereotypical representations of India. When integrating Indian inspiration, many international brands are beginning to recognise the importance of working with local creatives. Some European luxury brands like Dior are even starting to address the systemic invisibilisation of India’s finest embroidery artisans in their supply chains and provide some visibility to the crucial role of Indian embroidery in European luxury. Pushing against the weight of history is not easy, but it is vital. A set of images of art embroideries in the chapter ‘India Redux’ show the collaborative work of artist T. Venkanna and artisans from the Kalhath Institute, the Lucknow-based non-profit dedicated to craft preservation and artisans’ education founded in 2016 by Maximiliano Modesti. Ludic and painterly, the art embroideries transcend the usual boundaries of this craft form and provoke new ways of seeing and valuing the work of artisans. The Kalhath Institute provides a rigorous curriculum for talented young embroiderers, armouring them with the skill set to make the most of opportunities provided by 21st century markets. Following in their footsteps, the Mumbai-based Chanakya School of Craft supported by Dior has used artisans’ work in collaborations between the brand and artists such as Manu and Madhvi Parekh.

Appreciation is about rigorous research and respectful engagement with another culture, and it is also about investing sufficient time, study and dedication to create innovations inspired by that, rather than reproducing stale cliches. It is also about crediting, compensating and supporting the communities and artisans upon whose shoulders so much of India’s intangible cultural heritage rests. Any designer or brand must start from that basis, when being inspired by India.

Inspired by India: How India Transformed Global Designhas Phyllida Jay exploring the complex history of over six centuries of cultural exchange between India and the world. Published by Roli Books.