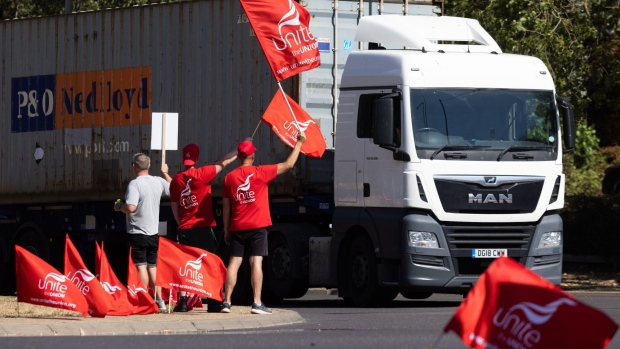 JD Sports Fashion Plc said it was hit hard by a dockers’ strike last month at Felixstowe, the UK’s largest container ship port, and it now expects further disruption from another strike at Liverpool.

The British sneaker chain was forced to reroute containers through other ports at Southampton, London Gateway and Rotterdam to work around the Felixstowe closure, Chief Financial Officer Neil Greenhalgh said in an interview.

Felixstowe and Liverpool are “probably the two main ports that our products come through,” the CFO said. Delays of even a couple of days “can be significant because when you’re talking about launch product for example, they’re time-sensitive deliveries.”

While the labor stoppage “causes a bit of disruption and a potential delay in receiving products,” the company hasn’t had to push back any product launches as a result, Greenhalgh said.

JD Sports said in a statement Thursday that it remains cautious on business in the second half, traditionally its most important period, highlighting macroeconomic uncertainty, inflationary pressure and the potential for further supply chain issues due to strikes.

The shares fell as much as 8% on Thursday in London, even as the retailer maintained its guidance for the year.

In addition to supply chain disruption, retailers are battling the UK’s highest inflation rates in decades, with shoppers pulling back from non-essential purchases and watching their spending on food and heating. JD Sports said business softened in August and early September but has improved since then.

The August slowdown was also driven by unseasonably hot weather at a time when the retailer was starting to transition to autumn stock, which features heavier items, Chairman Andy Higginson said in the same interview.

Consumers weren’t looking to purchase those products “while it was baking hot outside,” Higginson said. September’s back-to-school period has boosted sales, with shoppers buying new sneakers and sports bags, he said.

JD Sports also said it’s reached an agreement to pay former Executive Chairman and Chief Executive Officer Peter Cowgill at least £5.5 million ($6.3 million) as part of an exit deal after he was ousted in May amid concerns over governance practices. He will remain with the company as a consultant to support Higginson and CEO Regis Schultz.