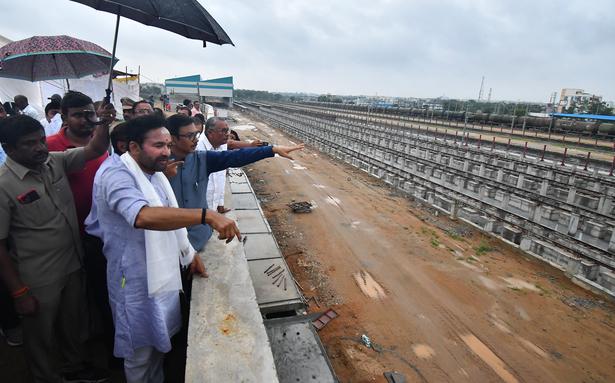 Union Minister for Tourism, Culture and Development of Northeast region G. Kishan Reddy has exuded confidence that the fourth major passenger terminal coming up for South Central Railway (SCR) at Cherlapally will be ready by December 2023.

“The Centre is spending up to ₹300 crore for developing this terminal on railways land of about 50 acres with modern amenities for the passengers like lifts, escalators, food stalls, waiting rooms etc. It will help decongest the city traffic as it will be connected to the Outer Ring Road (ORR) and upcoming Regional Ring Road (RRR),” he told presspersons after getting a briefing from the railway officials, and inspecting the works on Saturday.

Mr. Kishan Reddy said he, in a communication addressed to Chief Minister K. Chandrasekhar Rao, had sought permission to take up 100 feet approach road to the new terminal. Once complete, it would be a boon to the people living on the outskirts and the nearby districts, he added. Presently, one has to get into the city to reach their respective destinations after alighting from the long-distance trains.

A fourth passenger terminal was necessitated since there was no scope for expanding the existing major stations of Secunderabad, Hyderabad (Nampally) and Kacheguda due to dense growth around, making it unviable to take up land acquisition.

The Minister said the proposed ₹25,000-crore, 342-km RRR will be a “game changer” for the growth of the capital and Telangana with new townships and industries coming up and the Centre offering to bear 50% of the land acquisition cost. “It is a gift from Prime Minister Narendra Modi to the Telangana people,” he said.

He once again urged the Chief Minister to release the pending amounts due to SCR to complete the MMTS Phase II works nearing completion stage. “I had written thrice requesting him to release the amounts as the suburban train service will help the poor sections. We will see what we can do if the government does not give its share as per the agreement. The Centre is ready to take up Ghatkesar to Yadadri MMTS line if the government cooperates,” he said.

Earlier, SCR General Manager in-charge A.K. Jain, DRM A.K. Gupta, Chief Administrative Officer Neeraj Agarwal and chief engineer J.K.Jain and other senior officials informed Mr. Reddy that 25 pairs of trains can be handled from the terminal which they stated could be ready by February 2024, before the Minister advised them to advance the date. About 19 lines will be available, including nine new ones, automatic coach washing plant, new station building and effluent treatment plant are under construction.