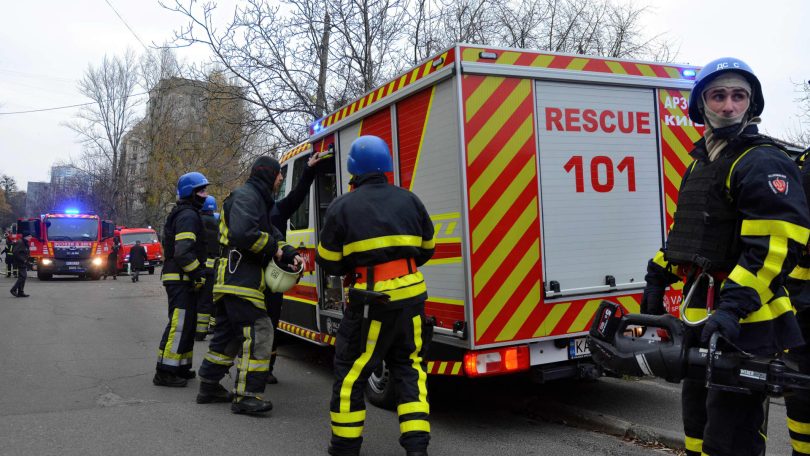 NATO said there was no indication that the missile strike that hit a Polish border village on Tuesday night was deliberate, saying that Russia was ultimately to blame as it continues to bombard Ukraine with missiles.

While the investigation was ongoing into the indicent, he said “there was no indication this was the result of a deliberate attack” and no indication it was a result of “offensive military actions against NATO.”

Preliminary analysis, as previously reported, suggests that the incident was caused by a Ukrainian air defense missile fired to intercept a Russian missile.

“Let me be clear, this is not Ukraine’s fault. Russia bears the ultimate responsibility as it continues its war against Ukraine,” he said.

Poland’s President Andrzej Duda said there is no evidence the missile strike on a village at the Polish-Ukrainian border was deliberate as details emerge suggesting the strike was a result of Ukrainian forces intercepting a Russian missile.

“We are in direct contact with our NATO allies. I emphasize — we do not have any circumstantial evidence that would allow us to conclude that it was an attack on Poland,” the president’s office tweeted Wednesday, citing comments by Duda.

“There is no indication that this was an intentional attack on Poland. Most likely, it was a Russian-made S-300 rocket. We have no proof at the moment that it was a missile fired by the Russian side,” he added.

“There are many indications that it was an air defense missile, which unfortunately fell on Polish territory.”

Poland has been a staunch ally of Ukraine during the Russian invasion, providing weapons to Ukraine as well as distributing military and humanitarian supplies from other allies to Kyiv.

Belgium’s defense minister is the latest official to suggest current evidence points to Ukraine’s forces being behind a missile strike that hit Polish territory Tuesday night.

“Based on current information, the strikes in Poland seem to be a result of Ukrainian air defense,” Ludivine Dedonder said on Twitter Wednesday.

“Pieces of Russian missiles and a Ukrainian interception missile are said to have landed in Poland,” she added.

Investigations continue into the Polish border missile incident which killed two people. NATO members are also set to meet in Brussels Wednesday to discuss the matter.

Russia’s Ministry of Defense laid the blame for the Poland missile strike at Ukraine’s door Wednesday, claiming that all Moscow’s missiles hit their intended targets during its massive air strike on the country yesterday that knocked out a significant part of its energy infrastructure.

The ministry said Russian armed forces launched a “massive air and sea-based long-range high-precision weapon against the military command and control system of Ukraine and related energy facilities,” yesterday, adding that “all fired missiles hit exactly on their intended targets.”

Addressing the missile that hit Polish territory on Tuesday, which initial reports suggest could have been fired by Ukrainian forces, Russia said again that it was not responsible. “We want to emphasize that high-precision strikes were delivered only on the territory of Ukraine and at a distance of no closer than 35 kilometers from the Ukrainian-Polish border.”

Polish security forces investigate in Przewodow village near the Ukrainian border, where two Poles were killed by a suspected missile strike.

It said photographs of the wreckage found in the village of Przewodow where the missile struck, killing two people, were identified by Russian defense experts “as elements of an anti-aircraft guided missile of the S-300 air defense system of the Ukrainian Air Force.”

Russia’s Defense Ministry then denied it had targeted Kyiv yesterday, saying strikes to residential buildings were “a direct consequence of the fall and self-destruction of anti-aircraft missiles fired by Ukrainian troops from Ukrainian and foreign air defense systems located within the city.”

Russian missile attack was largest ever on Ukraine’s energy sector

Ukraine’s national energy company said the wave of missile attacks that struck Ukrainian cities and energy infrastructure on Tuesday were “the largest attack in the history of the energy sector” and one which affected all regions of Ukraine.

According to a senior Ukrainian official, the attacks saw Russia fire over 90 missiles, which hit Kyiv, Kharkiv and Lviv and other parts of the country, damaging 15 energy facilities and leaving seven million people without power.

National energy company Ukrenergo said on Wednesday that the most difficult situation is in the west of the country, as well as in the central and northeastern regions.

A view of the dark streets after a massive Russian missile strike on critical infrastructure in Lviv, Ukraine, Nov. 15, 2022.

“To stabilize the energy system of Ukrenergo, emergency shutdown schedules were used. This made it possible to prevent a complete blackout of the country,” it said on Telegram, adding that emergency workers are trying to restore power to consumers.

It warned “the next few days will be difficult: the cold weather is approaching and the consumption of electricity will increase, accordingly, the load on the networks will also increase” and called on consumers to use power sparingly.

Firefighters work to put out a fire at a residential building hit by a Russian missile strike, amid Russia’s attack on Ukraine, in Kyiv.

“The enemy is cruel and we understand that he may not stop there. We have a response plan for various situations, including the worst. At the same time, Ukrainians should be prepared for significant interruptions in energy supply and have the necessary supply of water, charged devices and power banks,” Ukrenergo said.

AP also said the latest assessment of the origin of the missile contradicts its earlier reports that said Russian missiles had crossed into Poland, citing a senior U.S. intelligence official.

Kyiv residents watch while firefighters work at a scene where a Russian missile fragment fell near a residential building, setting objects aflame, on Nov. 15, 2022.

NATO and the Group of Seven advanced economies declared their support for the Ukrainian people after Russia carried out another round of “barbaric missile attacks” on Ukraine.

The Atlantic alliance and G-7 issued a joint statement from the G-20 summit taking place in Bali, Indonesia saying, “We condemn the barbaric missile attacks that Russia perpetrated on Ukrainian cities and civilian infrastructure on Tuesday.”

“We reaffirm our steadfast support for Ukraine and the Ukrainian people in the face of ongoing Russian aggression, as well as our continued readiness to hold Russia accountable for its brazen attacks on Ukrainian communities, even as the G20 meets to deal with the wider impacts of the war,” the statement said. “We all express our condolences to the families of the victims in Poland and Ukraine.

Separately, the communique expressed the two groups’ “full support and assistance” for an ongoing investigation in Poland, which said on Tuesday night local time that two Polish citizens were killed by a “Russian-made” missile that hits a rural area near the Ukraine border.

The statement did not add new details to the deadly explosion in Poland, which is a member of NATO.

Moscow launched a wave of missiles into Ukraine as global leaders in Bali were discussing the war and only hours after Ukrainian President Volodomyr Zelenskyy address the G-20 meeting. Ukraine’s military last week defeated Russian troops in and around Kherson, Ukraine — the latest in a string of victories for Kyiv.

Leaders who signed onto the statement came from Canada, the EU, the European Council, France, Germany, Italy, Japan, the Netherlands, Spain, the United Kingdom and the United States.

U.S. President Joe Biden said it’s “unlikely” a missile that killed two people in Poland was fired from Russia, citing the trajectory of the rocket.

Asked by a reporter if the missile was fired from Russia, Biden said: “There is preliminary information that contests that, I don’t want to say that until we completely investigate.”

He went on to say: “It’s unlikely… in the minds of the trajectory, that it was fired from Russia. But, we’ll see.”

Biden reiterated that the leaders of the Group of 7 agreed to support an ongoing investigation into the explosion.

“We agreed to support Poland’s investigation into the explosion in rural Poland near the Ukrainian border. And I’m going to make sure we figure out exactly what happened,” he told reporters on the sidelines of the G-20 summit in Bali, Indonesia.

EU says its ‘closely monitoring’ the situation in Poland

EU Commission President, Ursula von der Leyen talks to the media on May 18, 2022 in Brussels, Belgium. Today, the European Commission has presented the REPowerEU Plan, its response to the hardships and global energy market disruption caused by Russias invasion of Ukraine.

“I extend my condolences and my strongest message of support and solidarity with Poland and our Ukrainian friends,” she said on Twitter.

“We are closely monitoring the situation and are in touch with Polish authorities and partners and allies,” she said.

Her remarks come on the heels of an AP report that Russian missiles crossed into the NATO ally’s territory.

The ministry said Russia was carrying out a lengthy attack on Ukrainian infrastructure when the missile struck the village of Przewodów, killing two Polish citizens.

The Polish Minister of Foreign Affairs Zbigniew Rau called on the Russian ambassador for “immediate detailed explanations” of the incident.

Ukraine’s President Volodymyr Zelenskyy speaks during an interview with Reuters, amid Russia’s attack on Ukraine, in Kyiv, Ukraine September 16, 2022.

Ukraine’s President Volodymyr Zelenskyy said that Russian missiles hit Poland, a NATO country, in what he said was a “significant escalation” of the conflict.

Russian missiles hit Poland,” Zelenskiy said, according to a text accompanying his nightly video address. He did not provide evidence of the strikes and Russia has denied that it fired missiles on Poland.

“The longer Russia feels impunity, the more threats there will be to anyone within reach of Russian missiles. To fire missiles at NATO territory! This is a Russian missile attack on collective security! This is a very significant escalation. We must act,” Zelenskyy said.