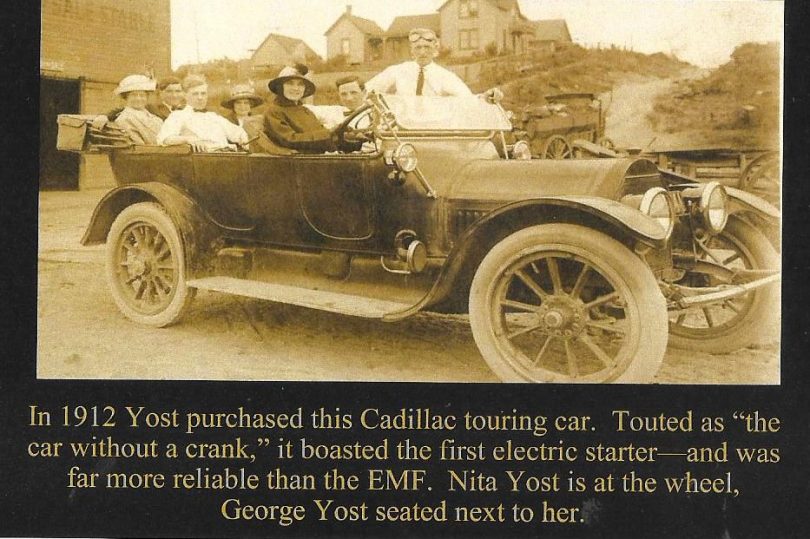 After receiving the latest issue of the Historic Edmonds Calendar as published by the Edmonds Historic Preservation Commission, I found that the 2023 calendar equaled the excellent standards we have seen each year.

The September portion of this year’s calendar with its photographs of early Edmonds automobiles captures some of Edmonds interesting history, including the 1912 Cadillac touring car owned by noted Edmonds businessman Allen M. Yost. Shown seated in the back seat of the Cadillac, next to the lady in the white hat, is Victor Hansen, one of Edmonds “prominent young men about town.”

Although his name was incorrectly spelled as Hanson, Victor Hansen is one of those listed on the granite face of the veterans’ memorial monument located at Edmonds Memorial Cemetery. He is also included in my Etched in Stone collection.

A true native son, Victor Hansen was born in Edmonds on Dec. 23, 1895, the third son of Edmonds residents Louis and Sine Hansen. He attended school in Edmonds, and lived in town with his parents and his three brothers at the family home located on the north side of George (Main) Street between 6th and 7th Streets.

In 1917, when he registered for the WWI draft, Victor was unmarried and working as an engineer for A. T. Clark & Co. in Edmonds. He was also a member of the Edmonds Chapter of the Independent Order of Odd Fellows (IOOF).

By May of 1918, Victor had been inducted into the U.S. Army and was sent to Camp Fremont in California and assigned to Co. B, 22nd Machine Gun Battalion. Located near Palo Alto, California, Camp Fremont was a newly opened post serving as a training site for the National Guard’s 41st Infantry Division for soldiers from Washington, Oregon, Idaho and Wyoming.

While still in training at Camp Fremont, Victor Hansen died Oct. 19, 1918 at the young age of 22 — one of the early victims of the infamous Spanish flu epidemic. As was common with many victims of this dreaded disease, the cause of his death was attributed to pneumonia. Victor Hansen’s body was returned to his hometown, where his well-attended funeral services were conducted by the Edmonds Chapter of the IOOF. He was buried at Washelli Cemetery in Seattle. Victor was survived by his parents and his three brothers, Harry, Walter and Leon.

The Edmonds Tribune-Review had this to say regarding Victor Hansen: “Until he entered the service a few months ago, he was a familiar figure and as well-known to all of Edmonds as any young man who ever lived here. Every citizen of Edmonds cannot help but feel the loss that has come to us through his death. That his familiar face will be missed is putting it mildly indeed.”

Publisher’s note: Copies of the 2023 calendar are available free of charge at several downtown and other merchants, Edmonds City Hall, the Log Cabin, and the Edmonds Historical Museum.