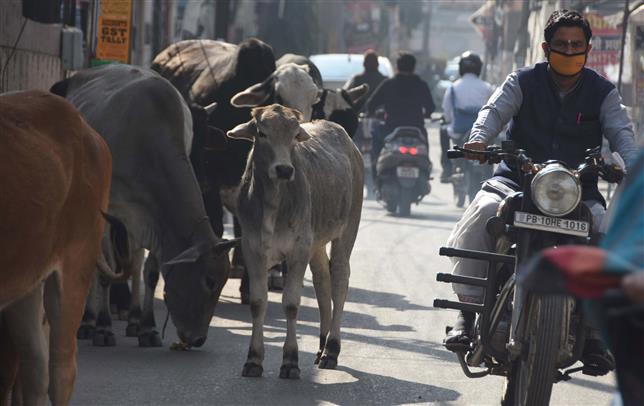 Though the Municipal Corporation (MC) has already collected over Rs 14 crore as cow cess during the ongoing financial year so far, it has failed to shift hundreds of stray cattle from city roads to shelters.

Even during foggy days of the ongoing winter season, a large number of stray cattle are seen roaming on roads. Thus, chances of fatal mishaps remain high. Fights among bulls are also common on roads.

Kumar Gaurav of Yuva, an NGO, said: “The successive governments failed to make necessary arrangements for stray cattle in the city even after collecting huge amounts of cow cess. The stray cows and bulls are forced to eat plastic in garbage dumps. But nobody pays attention. No lessons have been learnt from road mishaps occurred in the past. In recent years, only one shed at Burj Pawat was constructed on the ground level, for only a little number of stray cattle. Elected representatives and the authorities concerned must take steps to provide shelters for the stray cattle at the earliest.”

AAP leader and former councillor Daljeet Singh Grewal said: “Despite loss of lives of a number of people in fatal road accidents due to stray cattle roaming on roads, successive governments failed to take the matter seriously. Even after collection of huge amounts in the name of cow cess, no steps are being taken to shift the stray cattle from roads to a safer place. The state government is busy in showcasing development on advertisement hoardings, instead of resolving actual issues on the ground level.”

The MC is expecting to generate Rs 19.10 crore as cow cess in the present financial year 2021-22. It has already collected around Rs 14.86 crore cow cess from April to September 2021 and it is expected to generate Rs 4.23 crore more cess till March 31, 2022. Despite repeated attempts, Mayor Balkar Singh Sandhu could not be contacted for his comments.

Even during foggy days of the ongoing winter season, a large number of stray cattle are seen roaming on roads. Thus, chances of fatal mishaps remain high. Fights among bulls are also common on roads.