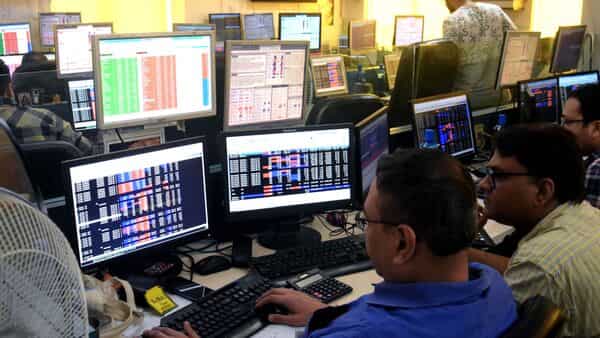 Except for banks, financials, and oil and gas stocks, the remaining other sectoral indices were on a negative note. On BSE, the Consumer durables index slumped by nearly 381 points, while Capital Goods dipped by 275 points. Metal, FMCG, and Healthcare indices also tumbled nearly a percent.

According to Ajit Mishra, VP – of Technical Research, Religare Broking, markets traded under pressure and lost nearly half a percent, pressurised by feeble global cues. After the flat start, Nifty tried to inch higher but the pressure in select heavyweights pushed the index gradually lower as the session progressed. Consequently, it settled around the day’s low to close at 18027 levels. Most of the sectoral indices traded in tandem with the benchmark wherein FMCG, metal, and realty were among the top losers.

Stocks like Power Grid, HDFC Bank, HDFC, ITC, and Tata Motors were top gainers. While HUL was the top laggard followed by Asian Paints after Q3 earnings. Other heavyweights such as Bajaj Finance, Nestle, Bajaj Finserv, L&T, RIL, and Infosys were also on the list of top bears.

Overall, in the week, the benchmarks rose between 0.5-0.6% on the back of volatility.

Furthermore, Vinod Nair, Head of Research at Geojit Financial Services said, “Shaking off the weak lead from Wall Street, domestic indices attempted to trade higher due to economic optimism that stemmed from China’s reopening. However, concerns over the global economic slowdown eventually caught up and dragged markets lower. All sectors bled, barring banking stocks, ahead of the release of key earnings by private banking majors.”

Meanwhile, at the interbank forex market, the rupee made its biggest gain in the current week against the dollar, however, restrained from moving past the key 81.10 level. Firmness in Asian currencies amidst the subdued dollar lifted the Indian rupee. The local unit finished at 81.12 against the US currency compared to the previous day’s closing of 81.36 per dollar.

Going ahead, Mishra said, markets will first react to the important results like Reliance, ICICI Bank, and Kotak Bank in early trade on Monday. Global cues are currently weighing on sentiment so a positive surprise on the earnings front might subside some pressure.

Also, he added, “we reiterate our view to continue with a stock-specific trading approach until we see improvement in participation and stability on the global front.”

In Emkay’s expert view, while the probability of the Fed hiking rates further to slay the demon of inflation is quite high, the consequences of the rate action over a period of time translating itself into an economic slowdown is occupying the minds of the investors. While inflation control might be an arduous task in the light of persistently higher fuel prices and supply issues, it is almost a certainty that a “touch and go” slowdown is most likely. These issues will be relevant in the coming weeks too, with the sole exception of the market drawing some comfort from expectations from the Union Budget due early next month.

Disclaimer: The views and recommendations made above are those of individual analysts or broking companies, and not of Mint. We advise investors to check with certified experts before taking any investment decisions.