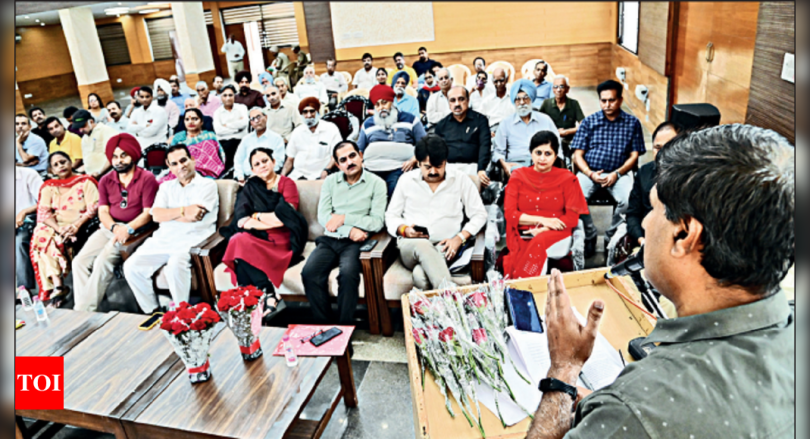 CHANDIGARH: Poor maintenance of parks, broken footpaths and roads, non-lifting of horticulture waste, improper and untimely collection of door-to-door garbage and non-pruning of dangerous trees were some of the civic issues raised by residents before municipal commissioner Anindita Mitra during her interaction with resident welfare association (RWA) members on Sunday.
The interaction was organised by the Chandigarh Resident Associations Welfare Federation (Crawfed) at the Sector 43 community centre.

Representatives of RWAs and their members shared their problems, narrating a long list of woes they have been facing frequently with the civic body failing to help them. On parks, members of Crawfed called their condition pitiable. “Due to uneven surface, water remains stagnant in parks. Iron railings are broken at many places,” said members, complaining RWAs do not receive timely payments for maintaining parks, with the MC even deducting their amount sometimes.
Joginder Singh, a member of the Sector 38 RWA, said, “There is a dire need to maintain footpaths and swings at parks.” Vinit Kumar of Sector 61 RWA said, “There are nine parks in our area having uneven levels. As a result, whenever it rains, they are filled with water, posing problems for walkers.” Poonam Rai of Sector 43 RWA said, “There is no place to dump horticulture waste.”
Crawfed members pointed out shortcomings in the door-to-door garbage collection. Pramod Chhabra of Sector 23 RWA said, “Collectors come to take garbage at their own whims. There should be transfer of garbage collectors to improve the system.” Rajvinder Singh of Sector 40 RWA said, “The garbage collection is not being done in a proper manner. Collectors are creating problems for residents. The system needs improvement.”
Several members of the federation raised the issue of cutting of dead and dangerous trees and pruning them. Members said branches of some trees have reached houses, posing a threat to lives of people. They also demanded removal of old trees.
The issue of increase in the number of street vendors and their presence along roads was also raised. “It creates traffic problem as well as increases chances of accidents,” said Major D P Singh (retd) of Crawfed. Poor construction of roads and construction and demolition waste dump site in Sector 45, demand for land for cattle and pups, broken street lights in Sector 43, and regular fogging were some of the other issues raised during the interaction.