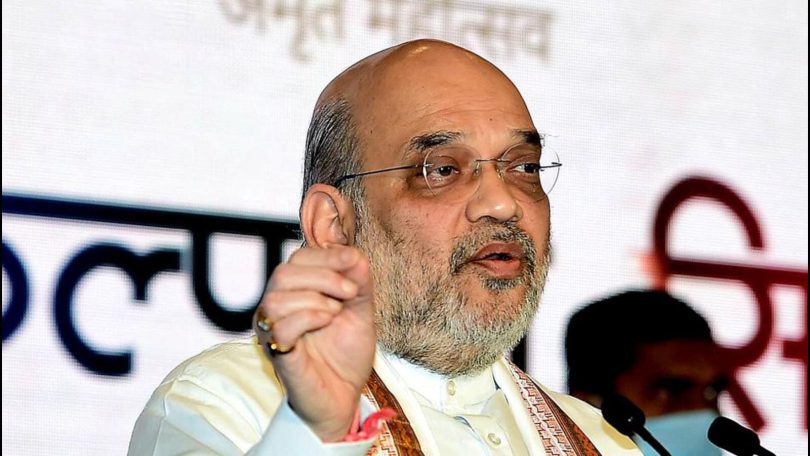 Taking a swipe at the erstwhile UPA (United Progressive Alliance ) government at the Centre, Shah alleged that there was “policy paralysis” then, while a number of scams also happened.

“In eight years PM Narendra Modi gave a ‘Sarva Sparshi, Sarva Samaveshi’ government to the country. There isn’t any area where reforms didn’t take place. We have taken an oath for the welfare of the entire society,” he said.

Meanwhile, Rizwan Arshad, Congress legislator from Shivajinagar in Bengaluru said, “Some kind of new political discourse they (BJP) have adopted. They propagated everything contrary to their actions.It is common knowledge not only in India but across the world that Mr Modi’s government has never been inclusive.”

“They have started this discourse where they blatantly lie on the face that they are inclusive,” he said, adding that it was a “cruel joke” they play on the people of this country.

Shah, who also holds the cooperation portfolio, was speaking at the ‘Sankalp Se Siddhi’ event organised by the Confederation of Indian Industry here to celebrate 75 years of Indian independence.

In an apparent reference to the erstwhile Congress-led UPA government, Shah said, “there was a time before 2014 when the Prime Minister was not considered as a Prime Minister as every minister believed he or she” was the PM.

“There was a policy paralysis in the country and there were ₹12 lakh crore (worth) scams. These scams used to make daily headlines of the newspapers. The CVC, CBI and the Supreme Court used to investigated these irregularities,”he alleged.

However, Arshad said, “Their (BJP’s) policies, ideology, actions and the way they try they portray the politics of exclusion itself is contrary to what they say.”

Shah also claimed that crony capitalism and price rise were at the peak and the ease of doing business had hit rock bottom then. The fiscal deficit was also high. “These developments made the country take a unanimous decision to install the Modi government with majority. After a long duration of 30 years, the country decided to have a decisive government,” he said about the BJP’s victory in the 2014 Lok Sabha polls.

India is now the fastest growing nation and we have successfully implemented the Goods and Services Tax (GST). The maximum exports and foreign direct investment took place in 2022, Shah pointed out.

He said the India has set its economic goal by introducing two slogans: ‘Atmanirbhar Bharat’ and ‘Make in India’ and laid the foundation for ‘Amrit Kaal’ (platinum era), which is the next 25 years, when the country completes 100 years of its independence.

“I can say with confidence that no one can take India lightly anymore. There will be no one, who will not recognise India’s rising power in the next 25 years,” he said.

When the Covid-19 hit the world, everyone was directionless and worried, because there was no vaccine available. The lockdown impacted not only Indian but also the global economy, Shah recalled.

“Amid the pandemic, India presented itself as a model. The economists worldwide recommended increasing demand, announced big packages and printed more currency notes but India adopted a new kind of policy.”.

He said India tried to come up with a remedy for the pandemic and encouraged an indigenously developed vaccine to help the society tide over economic sluggishness.

Rather than announcing packages and printing currency notes, India focused on its policies, Shah said adding the economists worldwide admitted that Indian economy was the first to successfully come out of the pandemic effect. He also claimed that India saved its Medium Small and Micro Enterprises (MSMEs) by giving a working capital of ₹6 lakh crore.

The Centre also provided free ration to 80 crore poor and marginalised people for 2 years and started the Direct Benefit Transfer scheme so that people can feel protected.

“We identified five limbs to focus: economy, infrastructure, systematic reforms in system, demography and, demand and supply to tackle Coivd. I am glad that this policy of PM helped India overcome the pandemic,” Shah said.

“We vaccinated more than 100 crore people and the world could not know this. There was no mismanagement as the technology was used brilliantly,” he said.

The 14 Production Linked Incentive (PLI) sectors like automobile, auto components, were given thrust so that they should not work in isolation, he said.

The home minister noted that after the Union government took care of their basic needs such as water, electricity, toilets in every house, direct benefit transfer to the farmers, houses to 2.57 crore population, health insurance to five crore people and 43 crore bank accounts to people and ₹23 lakh crore were given to poor under 300 different schemes.

He said the Narendra Modi-led government gave economy a human face. “We have not made the GDP arid but gave a human face to it.” Shah advised the industry to focus on changing the scale instead of increasing its speed. In this connection, he asked them to give impetus to research and development.

“Capital could be an issue but you can promote R&D through a consortium. Indians are considered to be the best brain for R&D in the world and CII should make efforts for it to do R&D in India. The industry should also back up startups because there is a kind of linkage between the industry and the startup,” he pointed out.

He also suggested to CII that nothing in the production chain from raw materials to finished goods should be made outside India.