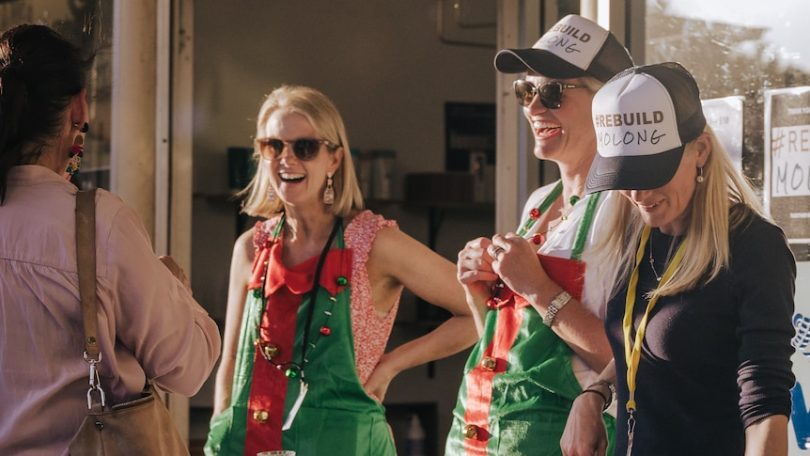 Five mothers from central west New South Wales have come together to raise money for local sporting infrastructure after floodwaters devastated their town.

Kate Strahorn, Emily Eckhard, Kate Greenwood, Helen Whittle and Cass Sullivan were cleaning mud and debris from the local pool when they decided to start their Rebuild Molong campaign.

Taking to social media and creating a GoFundMe page, the women have used their individual skills to bring the town’s effort to the attention of Australians.

Ms Strahorn said raising money for local sports was a way to bring some joy back to the community.

“We felt if we could restore some of our sporting facilities it would bring some normality back to life for everyone who has been affected,” she said.

“We felt we could make a meaningful difference with focusing on sport.”

Ms Strahorn said getting sport back up and running was also about supporting the mental health of the young people in the community.

“We don’t have beaches or oceans for our kids to go swim in,” she said.

“So when you lose your town pool or you lose your facilities down at the recreational field or sport is cancelled, we’ve really got to find somewhere for our kids to congregate again.”

Communities across the state’s central west were badly damaged by heavy rainfall on November 14, which resulted in record-breaking flooding.

Molong was among them, devastated after floodwaters ripped through its main street, recreational oval, homes and other areas of the town.

Ms Strahorn said the community response in and around Molong since the flood had been phenomenal.

“We’ve got to be humbled by the support that has come from all over Australia,” she said.

“It started on the first day of the flood when we had builders arrive from Dubbo and Wellington, or wherever, and they just came and helped us clear out shops and homes.

“There’s just been so much goodwill and so much generosity and kindness.”

Ms Strahorn said while the council had been working hard to support affected communities, federal government bodies needed to do more for households.

“At this stage households have received $1,000 [as a relief payment] and as we all can appreciate that just goes nowhere,” she said.

Although she hoped more financial support would be available for individuals, she was overwhelmed by the success of the Rebuild Molong campaign.

The group’s goal was to raise $100,000 and Ms Strahorn believed it was on track to reach it.

“We’re enormously grateful for the donations that have been put forward,” she said.

Ms Strahorn said at this stage, the group was focused on the fundraising itself, but she and the other women were looking forward to being able to distribute the funds and get local kids back to sport.

“As soon as we’ve got a clear picture that we can move forward, we will say sport is back on,” she said.