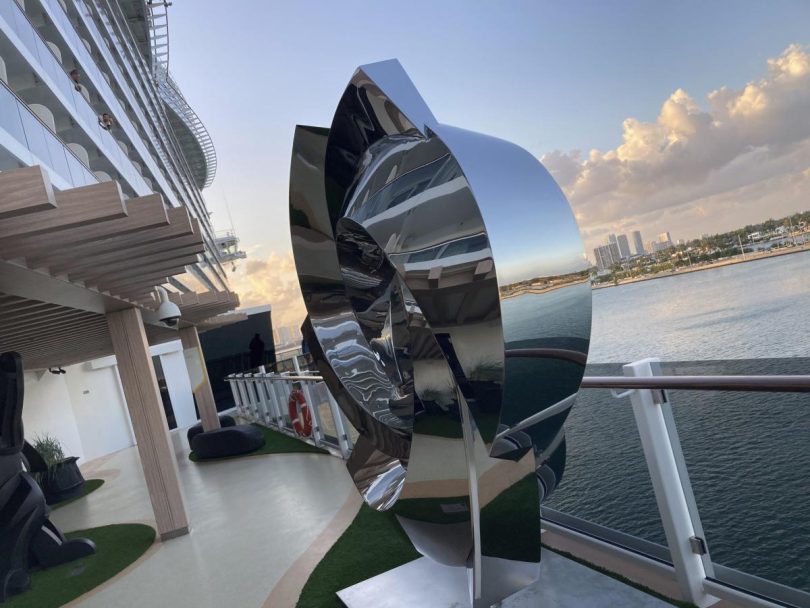 SOMEWHERE IN THE ATLANTIC — Since ships are often referred to with feminine pronouns, it’s fitting Norwegian Cruise Line gave its newest vessel in its newest class the feminine version of the Italian name for “first.”

The Norwegian Prima is the first of what has been known for years as the Leonardo class of ships, six vessels planned to debut in the next six years that all look to redefine what NCL offers to its customers.

“We set out to to create something that didn’t look like every other cruise ship out there,” said NCL President and CEO Harry Sommer during a media cruise out of Miami in November, saying the goal was to create almost a “boutique-hotel feel” with “lots of smaller, more intimate space, lots of beautiful design.”

The line has been showing off the ship among several ports since its August debut making stops in New York, Galveston and most recently Miami, but its first extended homeport will be Port Canaveral. It will start Caribbean voyages over the winter season beginning Dec. 11.

“I would call Port Canaveral an underserved market, because usually we only have one ship there in the winter,” Sommer said. Prima will be joining Norwegian Escape marking the first time the line has home ported two ships in Central Florida. “So this is really about where are the opportunities existing … We hope to be able to have two ships there every winter forever. That’s certainly our goal.”

Smaller than the last several ships for the line, it’s a combination of familiar touches found on vessels like the Norwegian Escape, Bliss and Encore, but a breakaway from others, particularly in design.

A pat of that is switching shipbuilders from German yard Meyer Werft to Italian shipbuilder Fincantieri, which NCL’s Simon Murray, in charge of guest experience and innovation, said he was still getting the feel of.

“I’ll describe it this way. You know when you start dating someone, you get to know them … You’re still trying to work out what she likes, and she’s working out what I like,” he said. “It’s a different way to work. It’s a different structure and build of the ship.”

Norwegian Prima has not let go completely of the cruise line’s identity. It makes the fourth time it has gone all in on a go-kart track, this one spanning three decks with room for 15 cars to race at one time, and amenities that set it apart.

“Let’s say you know, granny and granddad may not want to race in the go kart tracks — well they do as well, but if they wanted to watch their children and grandchildren, we created a viewing platform on Deck 20 that puts you right in the middle of the track,” Murray said.

He also noted they could shoot lasers at the go-karts to give them an extra boost of speed. The rides cost $15 each, but a new $20 offering lets riders try and test their speed solo on the track for three laps and compete for a trophy and cash prize by the end of the week.

The line also offers an unlimited track package for $199, which Murray said has been popular with some of the younger customers.

The rest of the options on board do set Prima apart from the line’s older ships. It’s the first time NCL has offered dry-slide options, similar to what travelers find on Royal’s Oasis-class vessels.

For NCL, though, there’s one on each side of the ship dropping 10 decks, each twisting in a tight corkscrew drop that takes just seconds. One features a bomb-bay door drop, and each put you in what Murray said looked a bit like a body bag.

“Literally the floor opens and you drop from Deck 18 down to Deck 8 and people scream — that’s the best part of it. It’s the big 6-foot-6 guy screaming like a girl,” Murray said.

For its wet slide offering, Prima has only one option — a quick three-deck tube ride called the “Tidal Wave” that has riders flying up and down the side of a half-pipe, a thrilling run with a quick 30-second turnaround on riders that should prove popular.

The rest of the top-deck active area features everything from mini-golf to foosball to pickle ball with alcoves amid the shaded protection under the go-kart track.

It’s not the only area that should attract the youthful clientele as in the interior of the ship, NCL is offering up Galaxy Pavilion, making its third appearance fleetwide, with virtual reality rides and an escape room.

For those looking for the line’s signature entertainment, the ship once again dips into its Broadway bag, this time playing up the 1970s and embracing disco with “Summer: The Donna Summer Musical.”

For those who aren’t down with disco, though, and have ever spent a day home sick from school, they’re in for a treat with the crowd-pleasing The Price Is Right Live game show. Members of the crowd are called up on stage for a modified version of the game bidding on products and playing mainstays like the “Race Game” and “Plinko.”

Smaller venues for entertainment on board cater to comedy, in the form of The Improv at Sea themed to the science of comedy, and the return of Syd Norman’s Pour House, which has among its offerings a Fleetwood Mac homage called “Rumours.”

Another big change to the ship is its atrium. Designed by Miami-based Studio DADO, which also handled dozens of other spaces on board, it is a departure from those found on any other ship with three decks in an assymetrical layout designed to invite cruisers to hang around.

“We wanted those components that you find in an urban space — shopping, eating, drinking — that make people gather, because we noticed on ships we had worked on in the past, while the atrium may be monumental, no one stayed there,” said the studio’s founding partner Greg Walton. “This atrium is never empty. It’s constantly full of people.”

Another big change for the ship is the effort given to Deck 8, which features wide-open spaces with wraparound views of the sea that proved popular for those strolling around the entirety of the ship, including a pair of see-through walkways to the open ocean below.

It’s also home to a pair of smaller infinity pools and dozens of loungers, areas with outdoor seating for some of the specialty dining, as well as one of the most popular dining venues, a unique alternative to the buffet called Indulge Food Hall.

The complimentary option is among nearly 30 dining and bar venues on board, maintaining the line’s freestyle dining approach, and committing to smaller spaces.

“I think in a post-COVID, the idea of having lots of smaller spaces, a much higher space ratio, less crowds everywhere, just more personal space all around is something that resonates really well with our customers,” Sommer said.