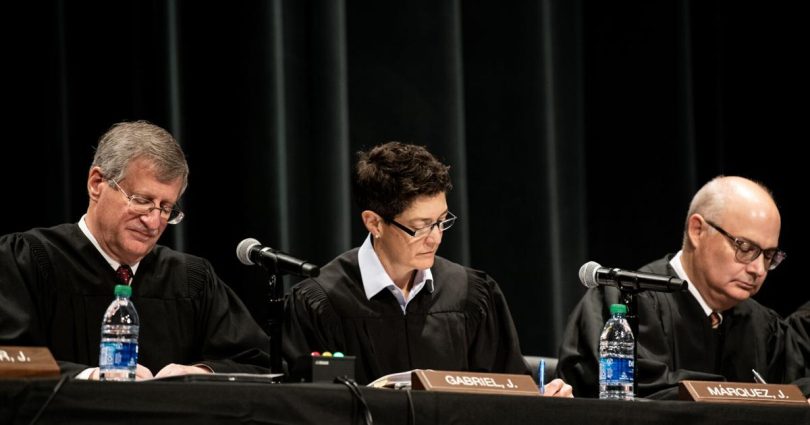 The Colorado Supreme Court stepped in this week to clarify whether the owners of a Montezuma County oil and gas formation have the opportunity to challenge a retroactive $2 million increase to their collective property tax bill.

The underlying sequence of events already made its way to the justices once in 2017, when the court decided energy company Kinder Morgan was liable for an additional $2 million through its operation of a large carbon deposit in southwest Colorado. However, when Kinder Morgan passed along the cost of the increase to individuals who had an ownership stake, those owners initiated their own legal fight against the higher tax burden.

Although the state’s Court of Appeals sided with the owners in 2021, finding they had the right as taxpayers to protest the evaluation, the legislature swooped in this year to clarify the law, appearing to cut individual owners out of the process.

Now, the Supreme Court must decide whether to uphold the Court of Appeals’ interpretation of the law or find the owners must turn to someplace other than Montezuma County if they want to challenge their tax burden.

“Maybe your clients have a cause of action against Kinder Morgan,” suggested Justice Melissa Hart during oral arguments on Tuesday. “Isn’t that the right place to look?”

The plaintiff, CO2 Committee, Inc., is made up of people who own a collective 11.2% of the McElmo Dome Unit, a carbon field in Montezuma and Dolores counties. Kinder Morgan operates the extraction of oil and gas, transporting it by pipeline to Texas and billing the owners accordingly.

Unlike other types of real property, the taxation of oil and gas derives from the quantity and value of produced material. While owners have the opportunity to submit their own revenue report to an operator, the unit operator will otherwise estimate and report the production value for property taxation, apportioning the taxes owed among the owners.

In 2009, an audit in Montezuma County showed Kinder Morgan underreported the total sale price by miscalculating its deduction for transportation costs. The county valued the McElmo Dome Unit at an additional $57 million, meaning Kinder Morgan was liable for $2 million more in taxes.

Kinder Morgan protested the increase and took its case all the way to the Supreme Court. However, the justices affirmed the retroactive valuation of the property.

In response, Kinder Morgan billed the other owners, including members of the CO2 Committee, for their share of the increase.

The committee then sued Montezuma County, arguing that, as property owners and taxpayers, they had the right to protest the retroactive increase, too. They asked for a court order blocking any retroactive assessment and returning “all illegal taxes” to the committee’s members.

In June 2019, District Court Judge Todd Jay Plewe found that even though Kinder Morgan made the direct tax payment to Montezuma County and passed the cost on to the other owners, state law only authorized the county to deal with the unit operator itself.

If counties had to address protests from hundreds of individual owners, “assessors would be overwhelmed. Appeals and contests could clog the system,” he added.

But the Court of Appeals interpreted the law differently, noting counties must provide the right to protest to “all taxpayers.” There was no indication, the court found, that a unit operator is the only one who has that right.

“We acknowledge that our holding today may upset settled practices regarding how counties review, audit, and retroactively assess the value of oil and gas leaseholds,” wrote Judge Jaclyn Casey Brown for the court, cautioning that, if individual owners have the right to protest, they can no longer rely on the unit operator to do it for them.

The Supreme Court agreed to evaluate the appellate court’s decision in March of this year. Simultaneously, lawmakers advanced a bill in response to the issues raised in the case. Senate Bill 26, which passed without a single no vote, clarified that a unit operator is “the sole point of contact” for all tax protests.

“There was a recent court decision in Montezuma County. It stated that there is not clarity with whom the assessor has to communicate,” said Sen. Barbara Kirkmeyer, R-Brighton, one of the sponsors of SB 26. “The statute needs to state the assessor only communicates with the operator. That is current practice. That is working.”

Similarly, the government asked the Supreme Court to decide the individual owners in the CO2 Committee had no independent right to protest the value of the McElmo Dome Unit.

Having the unit operator be the owners’ representative before the county made sense, argued First Assistant Attorney General Robert H. Dodd, because “there’s an alignment of interests there.”

The members of the Supreme Court questioned how the CO2 Committee could prevail against Montezuma County, particularly after the legislature changed the law to clarify that county assessors interact solely with the operator.

“I read the Court of Appeals opinion as really focused on the statute providing representative capacity for the operator in terms of the (tax) collection,” said Justice Richard L. Gabriel. “And the Court of Appeals was troubled by the fact that the statutes didn’t clearly provide for a similar representative capacity when you’re dealing with (tax) protest.”

But, he added, “that’s why the Senate bill here is so critically important. … My suggestion to you is that that Senate bill was in response to the Court of Appeals opinion to basically say, ‘We think you misunderstood.'”

Arguing that there could be unintended consequences of an operator-centric interpretation, John M. Cogswell, the attorney for the committee, raised a hypothetical example of an individual owner who submits inaccurate documentation to the unit operator about the value of his share of the oil and gas revenue. In that case, it would be appropriate to retroactively go after the owner, not the operator, for taxes.

“And the operator goes after the crook to collect,” countered Gabriel.